"We are short on resources like oxygen. Had we been prepared for this, perhaps a lot of lives would have been saved and the hospital staff would not have been stretched thin like it is now," she said.

Over the last few weeks the 29-year-old nurse, who declined to give her full name, has tended to an endless stream of patients -- some 400 a day. The job she had initially hoped would help support her family now hangs like a millstone around her neck.

As a wave of COVID-19 infections overwhelms India's health sector, the stress is being borne by the medics working in hospitals across India's capital. They work round the clock, going for hours on end without a break.

"As a human, you turn emotionally weak at the sight of death," she said. "But as a medico, one has to sideline all emotions. If we allow emotions to rule, then we won't be able to work."

The hospital, which has around 1,500 beds, is full. Over 90% of the patients are positive for COVID. "A lot of patients are being told to go back to home due to nonavailability of beds.

"I saw people crying, begging [the hospital] to take their patients and to get to bed," said Shurti.

"Nurses are front-line warriors," said L. Gopichandra, Delhi branch president of the Trained Nurses' Association of India. The association comprises 1.3 million nurses across India and 500,000 at hospitals in Delhi. "They are the ones [who] execute what doctors direct, and under the pandemic they are delivering more" than people realize, Gopichandra said.

Since the start of the pandemic, India has recorded more than 250,000 coronavirus fatalities. In Delhi alone, which has taken the biggest hit, more than 20,000 people have died from the virus.

Tragedy is everywhere, even before the patients arrive.

"In the first wave [of the pandemic last year], no one died in my ambulance," Arun Sharawat, a 28-year-old ambulance driver in Delhi, told Nikkei Asia. "But this time, out of five to six patients in a day, only one or two reach the hospital alive. Most patients die on the way." He receives dozens of calls a day, driving 250 km or so per shift. But he can only transport five or six patients to hospitals. Most fail to get admitted due to a lack of beds, forcing Sharawat to drive to multiple hospitals with patients -- or dead bodies in the back.

Sharawat cannot get one scene at a hospital out of his mind: "I saw a woman who laid herself at the feet of a doctor [begging him] to save his father. The patient was brought in dead. She was pleading with him as if she was expecting the doctor to bring him back to life. She was screaming so hard that everyone around cried. I couldn't face the situation. For days it was flashing before me. Her pain at the loss [of her] father felt personal."

Dr. Sanjay Chugh, a senior consulting psychiatrist in Delhi who has been practicing for 35 years, told Nikkei that he has never treated as many as medics at his clinic as he has in the past year.

"The numbers have spiked in the last month. The situation is -- it's like burning a candle from both ends. These medicos are not getting proper sleep and are on antidepressants. Medicos who have never [had] problems in the past are becoming psychiatric patients due to horror scenes in hospitals," Chugh said. 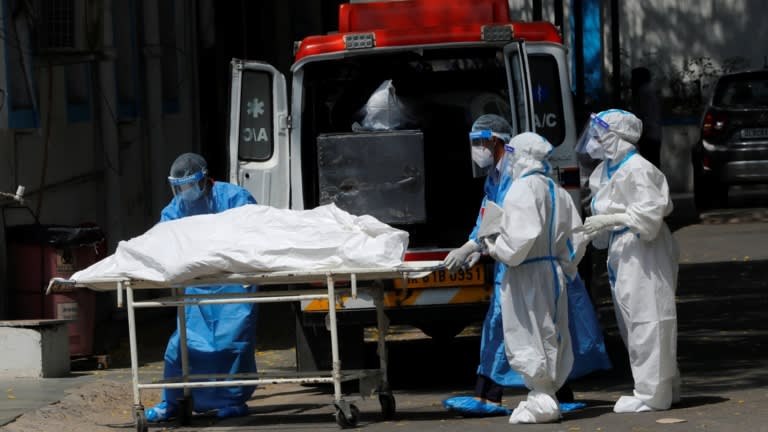 Mortuary workers load the body of a COVID victim into an ambulance at a New Delhi hospital on May 5.   © Reuters

"I have a small baby at home and we are working in risk, but for what? Only to witness more deaths," said a nurse in her 30s working at Holy Family Hospital in Delhi.

"I sometimes think, while performing my duty, 'What if I am affected by the virus. What will I do then?' But then I think that it's my job and I have to do it."

For the nurse, the most painful incident was when a 3-year-old girl died in her mother's lap when they reached the hospital. They had visited three other hospitals before reaching Holy Family Hospital. But they were refused entry everywhere.

"Being a mother, I couldn't hold myself [together] ... my eyes were moist and I was in shock about what was happening," the nurse said.