Study shows number of those in poverty doubles, middle class shrinks by a third 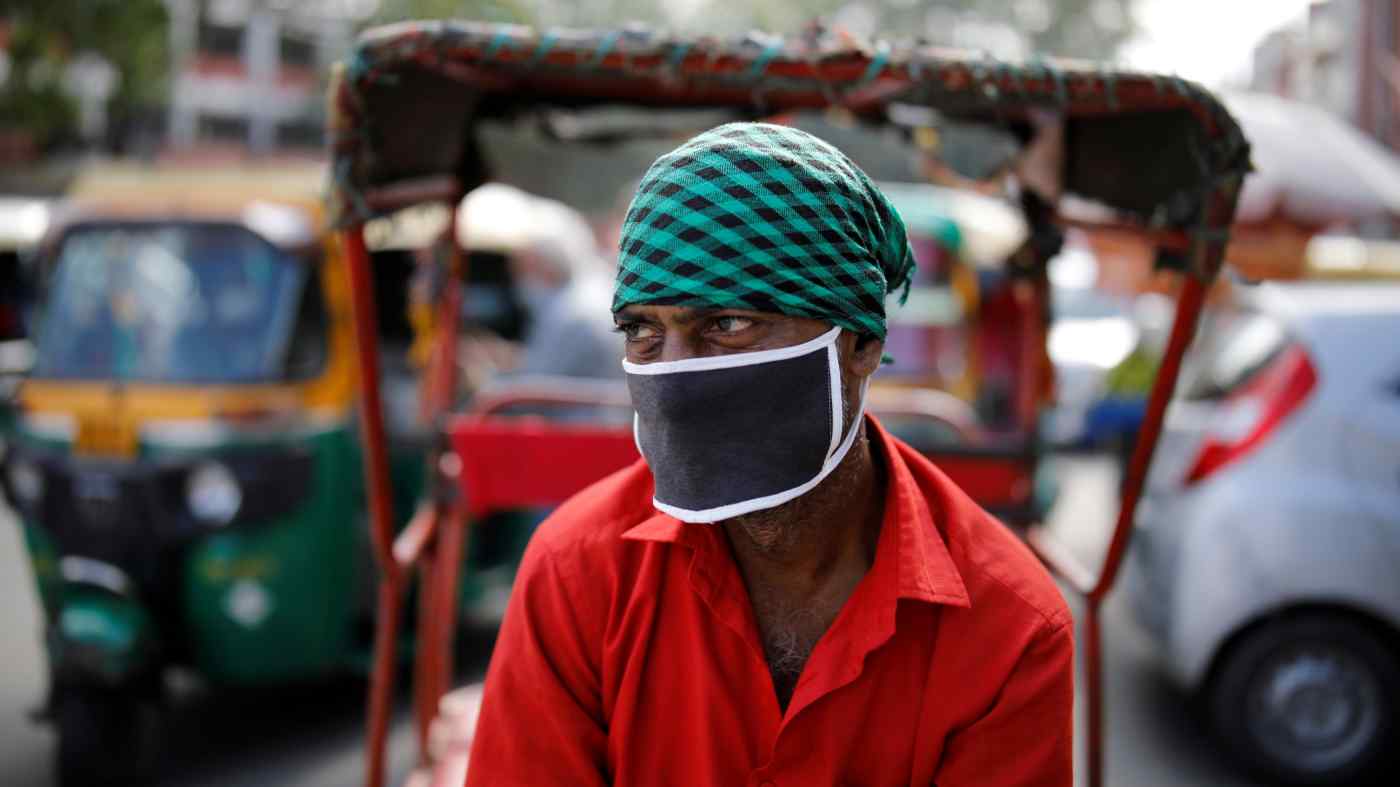 A rickshaw puller in Delhi in August 2020. Due to the pandemic, many Indians still use public transport only when they must, severely impacting transportation workers' income.   © Reuters
KIRAN SHARMA, Nikkei staff writerMarch 30, 2021 15:13 JST | India
CopyCopied

NEW DELHI -- Deepak Kumar, a father of two little girls in the Indian capital city, is now forced to sell French fries on a footpath after he lost his job last year in the fallout from the coronavirus pandemic.

"I'm only making 200 to 250 rupees [$2.75 to $3.45] per day currently," Kumar, 29, told Nikkei Asia, pointing out that he used to earn 15,000 rupees monthly when he was working as an electrician with a hotel and another 8,000 to 10,000 rupees from a side business of arranging food supplies for small private functions. "The COVID-19-related lockdown forced the hotel to close down, while my part-time business also shut, as people do not host much parties now."

His wife, Komal, 27, lost her job, too. She was working at a salon and making about 10,000 rupees a month. But her employer shut the business as customer arrivals thinned after the pandemic. "From over 30,000 rupees a month before COVID-19, our family income has now come down to a meager 6,000 to 7,000 rupees," Komal said while making fries with her husband.

"We had a saving of some 300,000 rupees, but it all vanished in the treatment of our younger daughter -- a toddler -- who fell severely ill with pneumonia last year," Kumar said, adding they now are left with no money. Their elder daughter is 6.

Kumar and his wife are among the millions of people in the country whose livelihood suffered because of the pandemic. India enforced the world's strictest lockdown in March last year, shutting businesses and suspending public transport before gradually reopening economic activities in subsequent months. The country also saw a massive reverse migration from cities to rural areas as laborers lost jobs at construction sites and factories, forcing them to return to the villages they had left in the hope of a better life.

India's gross domestic product contracted 24.4% year-on-year from April to June last year, the worst quarter on record. In the latest October-December quarter, the economy managed to recover to a positive growth of 0.4%, but it still remains far below the level it used to be.

According to a recent analysis by the U.S.-based Pew Research Center, 75 million more people in India, a country of over 1.3 billion, slipped into poverty last year because of the recession caused by the pandemic, accounting for nearly 60% of the global increase in poverty. The projected rise in poverty last year "claws back several years of progress on this front for India," Rakesh Kochhar, a senior researcher at the center, wrote in the report.

Krishan Kanahiyya, 45, an auto rickshaw driver in New Delhi originally hailing from the eastern state of Bihar, is one such person who was earning 500 to 1,000 rupees a day prior to the pandemic. The father of four teenage children is struggling to make ends meet now.

"For three to four months after the lockdown was imposed, I had no work. Even now people are not very forthcoming when it comes to traveling by auto rickshaw," he said, pointing out that passengers use public transport only when they cannot avoid it.

Kanahiyya says he earns just 100 to 200 rupees per day now, and this has forced his homemaker wife to start selling vegetables on a pushcart to help him provide meals for the family. "If this is not poverty, then what is? We have become even poorer than before," rued his wife, Sita Devi, 35.

In contrast to the many heart-wrenching stories in India, neighboring China, which has almost same population, witnessed smaller changes as a result of the pandemic. The number of people in the communist country's middle-income tier likely fell by 10 million, and poverty was virtually unchanged, the Pew Research Center report said. 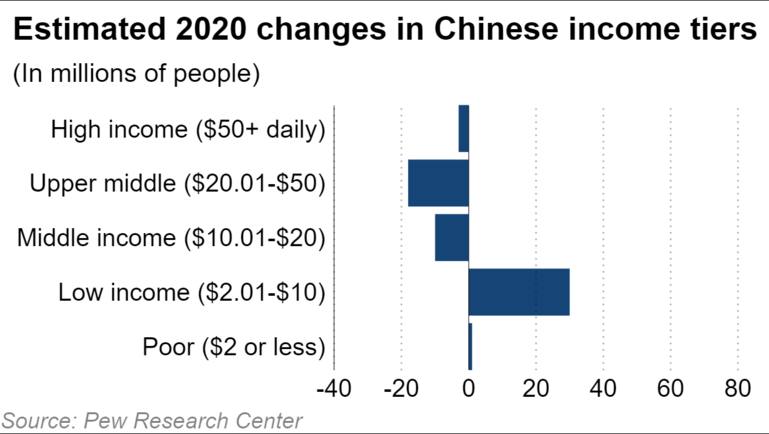 "The sector which suffered the most [due to the pandemic] is the contact-intensive services sector, which contributes 56-57% of the Indian economy," Sunil Kumar Sinha, principal economist at India Ratings and Research, a Fitch Group company, told Nikkei.

"That's where China has an advantage, [as] the size of their services sector as compared to their manufacturing sector is small. Therefore, a large population there could still continue with their jobs in manufacturing and earn salaries. But in the Indian context ... [the services sector] is still struggling," he said.

Despite all these things, Prime Minister Narendra Modi remains an immensely popular leader, with most people expressing satisfaction with his handling of the COVID-19 pandemic, according to the January 2021 edition of the Mood of the Nation survey conducted by India Today Group and Karvy Insights.

The poll showed that 74% of respondents rated his performance as prime minister as "good" or "outstanding," a marginal drop from 78% in August 2020.