'Tip of the iceberg': Oxygen shortages add to woes of overloaded clinics Workers load empty coffins for COVID-19 victims into an ambulance to be distributed to a hospital in Jakarta on Monday.   © Reuters
ERWIDA MAULIA and ISMI DAMAYANTI, Nikkei staff writersJuly 5, 2021 21:46 JST | Indonesia
CopyCopied

JAKARTA -- Indonesia's COVID-19 crisis further deepened on Monday, as records were set for daily cases and fatalities amid reports of people dying during self-isolation and overloaded hospitals struggling with oxygen shortages.

One woman contacted by Nikkei Asia told of several deaths recently among colleagues and other people she knew.

"My colleague, a 35-year-old man, died last week after his family went to several hospitals before they could finally get him admitted to a hospital [in another city]. He died shortly after," said an employee at a government agency in the outskirts of Jakarta. "My other colleague, a 50-year-old woman, also died last week from COVID. And a week before that, another colleague lost both of her parents from COVID. She's now self-isolating and still very much traumatized."

Local TV reports showed footage of a dramatic evacuation of a 52-year-old man in Pacitan, a small town in East Java Province, who died while self-isolating after testing positive. Officers wearing protective equipment were seen moving his remains from the second floor of a boarding house using bamboo poles and ropes because the staircase was too narrow for them to carry the body.

Over the weekend, two siblings in their 40s and 50s died in a house in Tasikmalaya, West Java Province, reportedly while self-isolating after they and four other family members tested positive. Similar stories have echoed from other regions over the past two weeks, as the case and death tolls have both reached new highs nearly every day over the past week in the wake of the Eid holiday in May, with the more virulent Delta variant adding to the surges. People queue up to refill their oxygen tanks at a filling station in Jakarta on Monday. Parts of Indonesia lack oxygen supplies as the number of critically ill COVID-19 patients who need it increases.   © AP

The surge in cases has caused hospital overloads across many regions on Indonesia's densely-populated Java island, which includes Jakarta and satellite cities, meaning many patients have been denied needed treatments. Those with less severe symptoms are often told to self-isolate, but with poor monitoring from local governments, many people's conditions have deteriorated quickly.

Local watchdog LaporCovid-19 said it has compiled reports of at least 265 people who died due to COVID-19 while self-isolating at home over the past month, with the provinces of West Java, Yogyakarta and Banten reporting most cases. There have also been several cases in some provinces on Sumatra island.

"[They died] while looking for [available] health facilities, while waiting for lines at hospital emergency wards [to shorten]," LaporCovid-19 said on its website. "This phenomenon reflects a real portrait of the collapse of the health facilities."

"The number probably doesn't reflect the real situation because not everybody reports [their cases] to LaporCovid-19 or social media -- or gets media coverage. We're worried that this is just the tip of the iceberg."

Not just those self-isolating, many patients also died after they were taken from one hospital to another so they could get treatment. With many beds in isolation wards and intensive care units fully occupied, patients are crowding emergency units and forcing many hospitals to set up emergency tents in their parking lots. 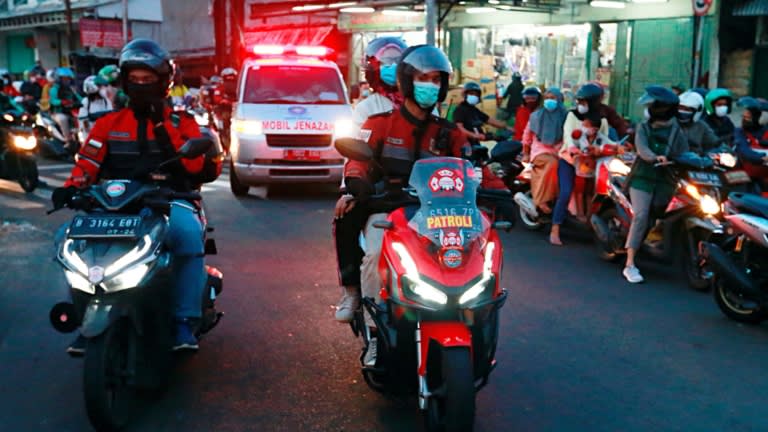 With the continuing influx of patients in severe conditions, hospitals are now facing another emergency situation -- an oxygen crisis. In Yogyakarta Province, over 30 patients died overnight on the weekend in a main referral hospital for COVID-19, reportedly after it ran out of its central oxygen supply.

In Bandung, the capital of West Java Province, one hospital announced through its Instagram account on Sunday that it will not take any more patients through Wednesday because "oxygen supply is unavailable."

Meanwhile, in some cities including Jakarta, people have been seen lining outside shops selling oxygen cylinders at overcharged prices, while some other shops closed because they couldn't secure new supplies.

The government had earlier maintained that domestic oxygen production will be enough to meet rising demands from hospitals. But on Monday, Luhut Pandjaitan, coordinating minister for maritime affairs and investment, admitted that there has been a shortage.

"Demand [for oxygen] is rising three or four times [the usual], so there has been a problem with distribution," said Pandjaitan, who was recently appointed to head the central government's emergency COVID measures. "There have been shortages indeed, but with arrangements with five oxygen producers, we'll be able to allocate 100% [of their production] for medical needs."

Pandjaitan also announced that the government will partner with 11 telemedicine platforms to help monitor and prescribe treatments for self-isolating patients -- including Alodokter, Good Doctor and Halodoc.

On Monday, traffic levels appeared much lower in Jakarta's central business districts after the government began imposing tough mobility restrictions on Saturday. The emergency measures are set to take place through July 20. Roads were congested, however, in some entry points into the nation's capital with police blocking some roads and screening commuters. Only those working in essential sectors and carrying the right documents are allowed to pass through.

Finance Minister Sri Mulyani Indrawati told a separate virtual briefing after a plenary cabinet meeting on Monday that the government will add 21.09 trillion rupiah ($1.46 billion) to Indonesia's health spending this year, to 193.93 trillion rupiah. That includes funds for increased testing and tracing, payment of health worker incentives and for vaccine procurements.

She added Indonesia's economy was estimated to grow around 7% in the second quarter, and was projected to expand 4% or more in the third quarter if the government manages to control the COVID-19 situation this month and relax restrictions next month.

"However, if restrictions prolong because COVID-19 [cases] remain very high, then the economic growth in the third quarter may drop by around 4%," Mulyani said.

Chief economic minister Airlangga Hartarto said the government now forecasts economic growth of 3.7% to 4.5% for all of 2021, down from its previous forecast of 4.5% to 5.3%.