A young girl is seen with her family on Wednesday after COVID restrictions were eased to allow children under 12 into shopping malls in Jakarta.   © Reuters
SHOTARO TANI, Nikkei staff writerSeptember 24, 2021 14:57 JST | Indonesia
CopyCopied

JAKARTA -- Indonesia has shed its undesirable tag as Southeast Asia's COVID-19 epicenter, and now has the least daily infections per capita in the region.

Daily infections topped 50,000 at their peak in July, now number less than 5,000 per day, with 3,263 new cases recorded on Thursday. The positivity rate has fallen below 5%, according to Our World in Data, below the threshold the World Health Organization has said was conducive to governments reopening their economies.

The Philippines is now the COVID-19 front-runner among the six large countries in Southeast Asia, with around 20,000 cases a day. Malaysia is worst in terms of new infections per million people -- about 450 in recent days. Indonesia, by far the most populous country in the region, with around 270 million people, is now the best regional performer with new infections of less than 10 per million.

Tighter social restrictions imposed in mid-July are credited with speeding the decline in Indonesia. But with year-end holidays approaching and restriction fatigue creeping in, experts say extra caution is needed to avoid a third wave of infections.

"One of the determining factors was indeed the PPKM [social restrictions], which was most effective during the implementation of the Emergency PPKM in early July," said Laura Navika Yamani, an epidemiologist at Airlangga University. The emergency measures initially targeted Bali and Java, Indonesia's most populous island and location of the capital, Jakarta. The rules stipulated that all nonessential workers work from home; the closure of shopping malls, schools and places of worship; and a ban on dining at restaurants, which could serve only delivery and take-away food.

"I observed public awareness being created to implement health protocols, especially wearing masks" during the emergency restrictions, Yamani said. "For example, there were [police] officers at public places and the public had no choice but to obey, like wearing masks."

Indonesia has also introduced a vaccine passport app for use in places such shopping malls and office buildings. People who have not received any vaccines are barred from entry.

With cases falling, the government has tweaked the social restrictions to allow economic activity to pick up. The country's COVID-19 task force representative on Tuesday outlined a further easing of rules: Children under the age of 12 are able to enter shopping malls, cinemas can open at 50% capacity, and nonessential sector workers are be allowed to return to offices at 25% capacity if they have had two vaccinations.

The public, which is tired of months of restrictions, is taking the decline in case numbers as an opportunity to blow off steam.

"Even though I left Jakarta at 4 a.m., I was stuck in a massive traffic jam and it took me six hours just to get to Bandung," said Dinia Yuliana, an office worker in the capital, who was taking a trip to the getaway city of Bandung -- normally a three-hour drive.

Google mobility data shows that at the height of the second wave in mid-July, foot traffic in retail areas had dropped by around 20%, and by about half at transit stations compared to the baseline -- the five-week period from Jan. 3 to Feb. 6 last year.

As of Sept. 16, foot traffic in retail areas was on par with the baseline period and around 30% lower at transit stations -- more evidence that people are returning to recreation spots. 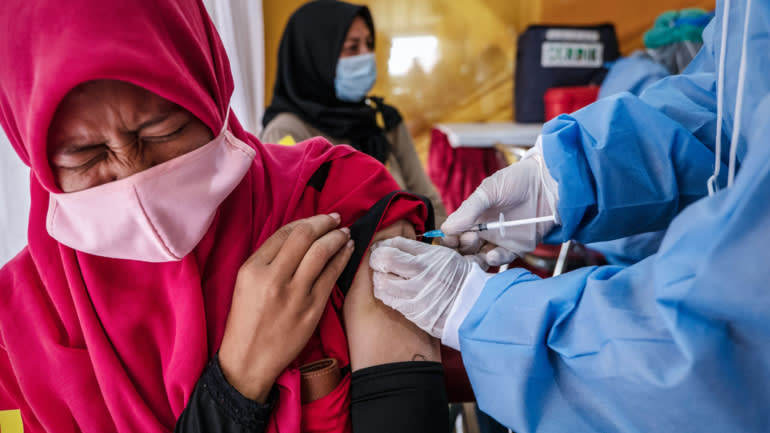 A woman receives the Sinovac COVID-19 vaccine in Indonesia in March. The country's infection rate has fallen to the lowest per capita in Southeast Asia.   © Getty Images

Even so, the country's vaccination rollout is progressing slowly. Just over 16% of people eligible for inoculations have received two full doses, according to Our World in Data. Only Vietnam has a lower full vaccination rate among the region's top six economies.

Provinces like Jakarta, Bali and Yogyakarta have been the outliers in Indonesia's inoculation program, with 72.9%, 57.5% and 30.2% of the population being fully vaccinated, respectively. But most other provinces on Java have rates below 20%.

And as the country heads toward the year-end holidays, experts warn that the government must take early steps to avoid a repeat of July. Tighter social restrictions only came after the country saw a surge in cases, despite the government anticipating the rise because many people left the cities to return to their homes in the country during the Islamic holiday of Eid in May.

"With the holidays coming in two to three months' time, social restrictions should be prepared around a month from now," said Yamani of Airlangga University. These should include "vacation destinations limiting the number of visitors, and restrictions on unnecessary movement, especially those crossing regional borders."

"Singapore or the U.S., which statistically have vaccinated the majority of their populations and claim to have achieved herd immunity, are still facing new surges," he said. "This is an indicator that herd immunity has not been proven to last long.

"Indonesia will certainly find it very difficult to achieve herd immunity, and it is only possible in areas such as Jakarta with rapid vaccination coverage," Ahmad said.