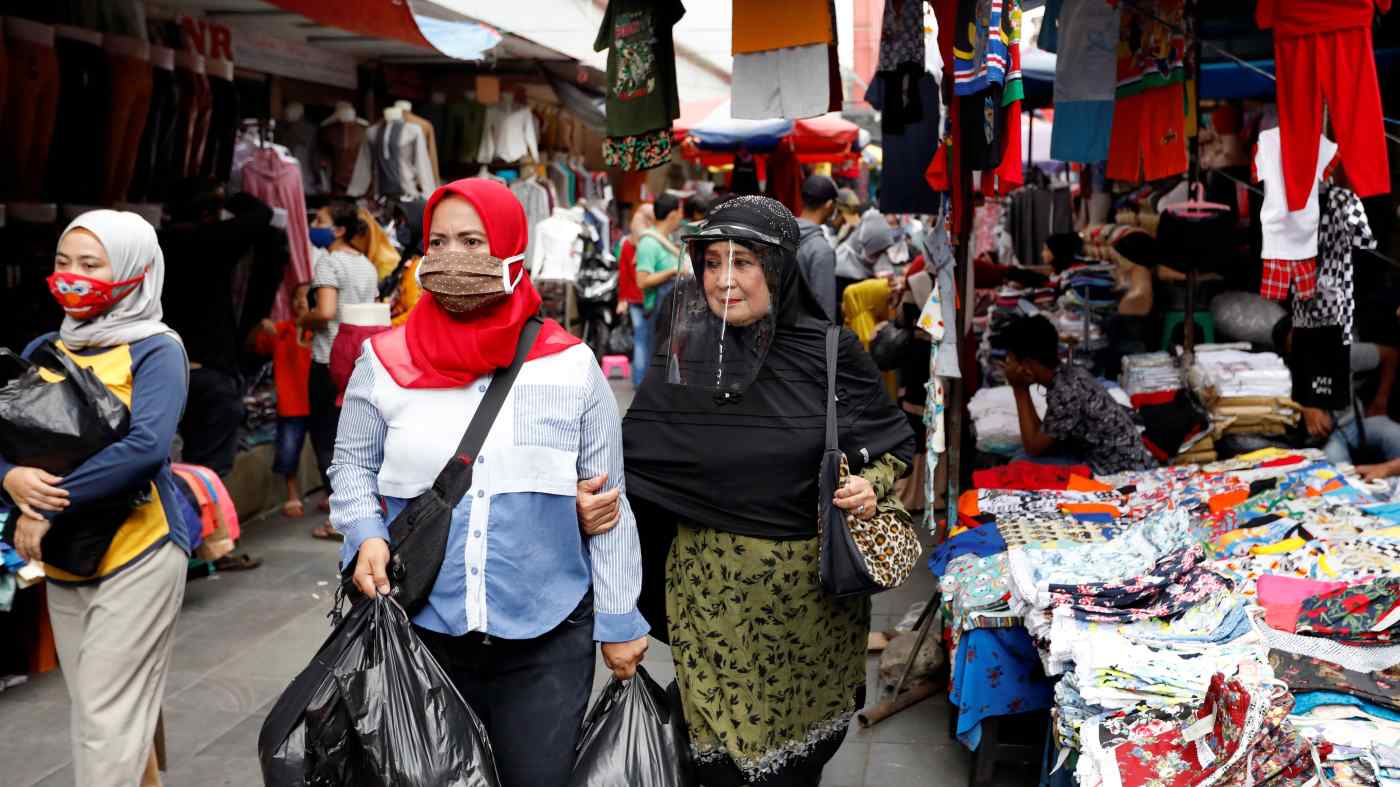 JAKARTA -- Indonesia has seen two of its biggest daily spikes in coronavirus cases this week, but the worst may yet to come with concerns rising over further contagion surrounding the celebration of the Islamic holiday of Idul Fitri, due to fall on Sunday.

On Thursday, the government's task force for COVID-19 announced 973 new confirmed cases, the biggest 24-hour rise since Indonesia reported its first cases in early March. With a total of 20,796 cases as of Friday, Indonesia has the second largest number in Southeast Asia after Singapore. The rising trend over the past week or so coincides with the approach of Idul Fitri, a major festivity that marks the end of the fasting month of Ramadan.

"As far as I know, the reopening of markets in a number of regions have contributed to the increases," University of Indonesia epidemiologist Tri Yunis Miko Wahyono told the Nikkei Asian Review on Friday. "Cases are increasing in [the Jakarta satellite cities of] Bekasi, Tangerang and Depok because many clothing shops have reopened, causing maximum contagion."

Wahyono added that he had observed a similar trend in East Java Province, which contributed more than half of Thursday's new cases. The local authorities, which have imposed movement restrictions, have not permitted these re-openings. However, enforcement is lax and "people are probably trying to get money in the weeks leading to Idul Fitri. They're panicking when they don't have money for Idul Fitri," Wahyono said.

Idul Fitri marks the end of the fasting month of Ramadan and is a major festivity in Indonesia -- home to the world's largest Muslim population. It is typically observed by Muslims gathering with extended families and relatives, visiting neighbors and friends, donning new clothes and indulging in a holiday feast. The holiday also has traditionally led to millions of people joining an annual travel movement called mudik, when they leave big cities for smaller hometowns to celebrate the day with their families. 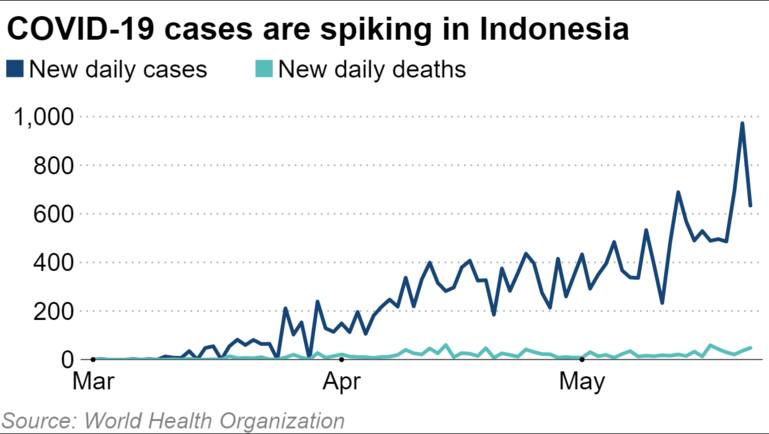 Last year, 19.5 million people in Indonesia took part in mudik. This year, to contain the outbreak, the government in late April imposed a nationwide travel ban affecting flights, rail and ferry services to discourage mudik travelers -- before relaxing the restrictions earlier this month to accommodate essential workers as well as migrant workers returning from overseas. Additionally, the government has decided to postpone until December a period of leave on either side of Idul Fitri totaling four days.

But mudik travelers have continued to trickle through the movement restrictions. In the past few days, some roads popular with mudik travelers have seen a rising number of vehicles -- such as the Pantura highway, which connects cities with some northern parts of Java island. Central Jakarta Governor Ganjar Pranowo said on Wednesday he estimated approximately 1 million people to have arrived in Central Java province by the time of Idul Fitri, most from Jakarta and surrounding cities.

Although Merak on the Java side has imposed strict measures to prevent travelers from crossing the Sunda Strait, Bakaueheni Port on the Sumatra side seems to have failed in doing so -- resulting in hundreds of people being stuck in Merak as bus services from the port have been suspended.

Traditional markets in many regions -- including Jakarta -- are seeing more crowds this week as housewives in particular shop for food ingredients for the Idul Fitri feast.

Meanwhile, leaders of the Indonesian Ulema Council, or MUI, and some major Muslim organizations are intensifying calls to avoid crowds by performing the Eid prayer at home and refrain from visiting each other during Idul Fitri.

The MUI has issued a fatwa, or religious edict, against mass Eid prayers in regions impacted by the outbreak. Only a few regions like Jakarta are enforcing physical distancing rules including on gatherings in mosques.

"We strongly urge [people] to perform the Idul Fitri prayer at home with core family members," Religious Affairs Minister Fachrul Razi said in a televised speech on Thursday. "And celebrate Idul Fitri by staying at home. There is no need to go anywhere, no need to receive visitors -- your guests might come carrying the virus."

But already, many mosques are defying the calls by preparing to host the mass prayer on Sunday morning, although some of them promise to apply physical distancing by imposing space between attendees. Mosques in many regions have earlier defied physical distancing measures by hosting the evening prayer during Ramadan, which attracted a lot of crowds.

Wahyono said it was tough to tackle Indonesians' habits, especially if new measures clash with the local culture. He added that many Indonesians had low levels of education and could not comprehend the danger of the virus.

"They've violated the movement restrictions many times already. So the cases might top 1,000 per day during Idul Fitri."