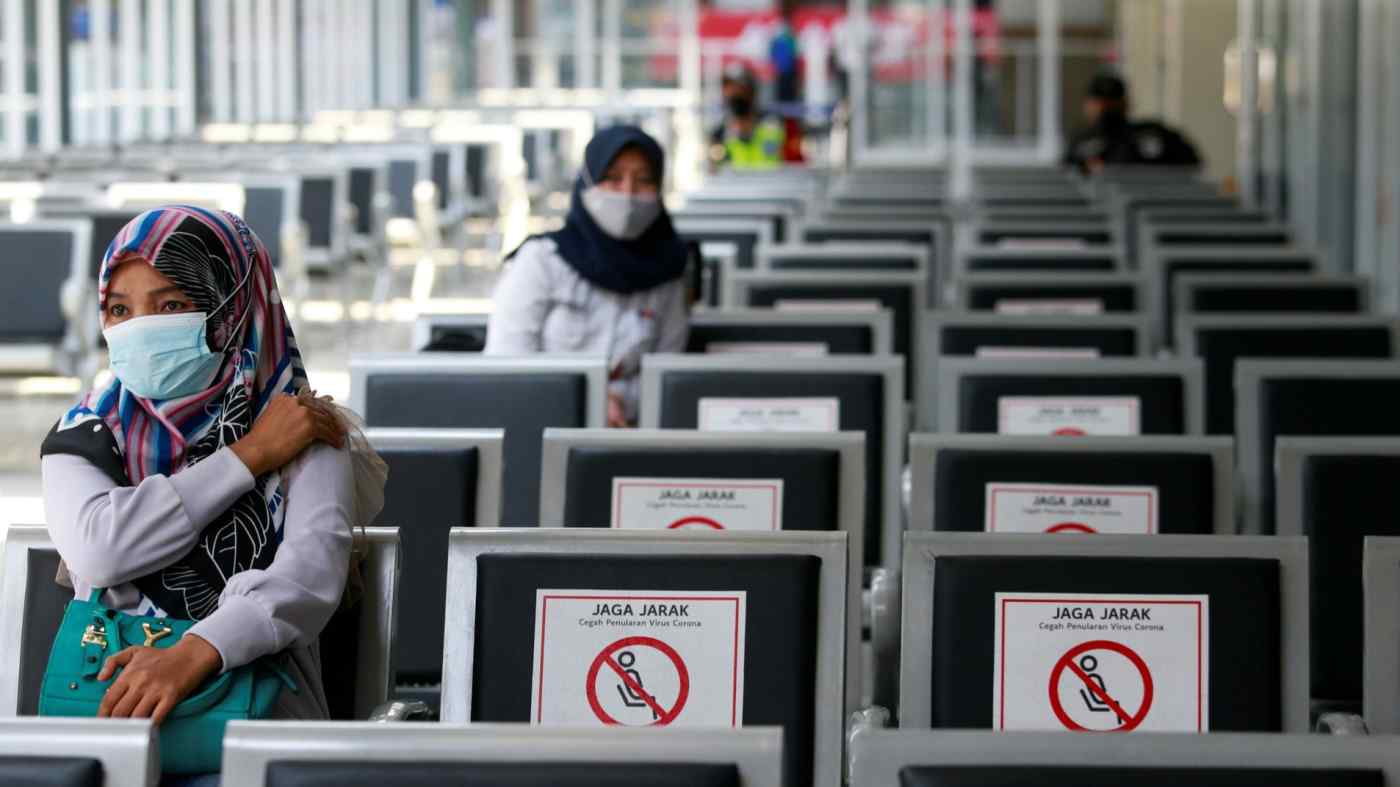 JAKARTA -- Indonesia will extend its tight mobility restrictions across major cities in densely populated Java, Bali and elsewhere, as deaths from COVID-19 rise despite declines in new infections, the government said on Monday.

The partial lockdowns that have been in place since July 3 will be extended for at least another week through next Monday, President Joko Widodo said in a Monday evening address.

"Even though there have been improvements, the development of the cases is still very dynamic and fluctuating. We must remain on alert to control COVID-19 cases," Widodo said. "To reduce the people's burden from restrictions in mobility and economic activities, the government will keep accelerating the distribution of social aid."

Indonesia averaged 39,000 new cases a day in the past week, down from a peak of about 50,000 in mid-July. The country's rolling seven-day average for confirmed daily infections is now below that of the U.S. and India, according to Oxford University's Our World in Data.

However, Indonesia's daily death toll is more alarming, having climbed to an average of 1,789 in the past week from about 1,000 in mid-July. It leads the world in highest daily deaths from COVID-19 in the past week, followed by Brazil, Russia and India, according to Our World in Data.

Health Minister Budi Gunadi Sadikin said major cities in Java and Bali are still reporting most of the cases and deaths, including Jakarta and its suburbs as well as the capitals of West, Central and East Java Provinces and their surrounding areas.

While hospitals in these regions are seeing bed occupancy rates decline for COVID-19 patients, Sadikin partially attributed the high death toll to late hospital admissions due to many patients' reluctance to get treated until after their conditions deteriorated.

"Before [the latest peak], deaths occurred after an average of eight days at hospital. Now the average is three to four days," the health minister said.

Jakarta-based watchdog LaporCovid-19 recently reported at least 2,313 COVID-19 deaths outside hospitals between June 1 and July 21, attributing most of the deaths to overloaded hospitals rejecting patients.

Indonesia has continued to adjust its lockdown policy since the pandemic began and now calls the restriction measures "PPKM," with the government dividing regions across the archipelago into four levels of PPKM. Level 4 is the strictest, and Level 1 is the most lenient.

Under Level 4, which remains in place in most of Java, nonessential workers must work fully from home, and shopping malls are closed except for supermarkets and pharmacies inside.

The coordinating minister for the economy, Airlangga Hartarto, said PPKM Level 4 was currently in place in 45 cities and regencies outside Java and Bali, where the delta variant has fueled a surge in cases, straining local hospitals and causing deaths. These include the capitals of North Sumatra, Riau, South Kalimantan, South Sulawesi and Papua provinces.

In replicating emergency measures in Java and Bali, the government is establishing special task forces to ensure oxygen supplies in some of those provinces, Sadikin said. As dozens of hospitals in these provinces have reported oxygen shortages, the health minister has instructed regional administrations to open more isolation facilities.

He added the government has dispatched 4 million doses of Moderna vaccine donated by the U.S. across Indonesia, and urged regional health agencies to immediately administer them as a booster shot for health workers.

As of Monday, 20.9 million Indonesians have been fully vaccinated and 47.7 million others have received their first shots, or nearly 8% and 18% of the population, respectively.

Sadikin said Indonesia has received about 90 million vaccine doses so far, mostly of China's Sinovac. The country expects to receive over 70 million doses each in August and September to reach its target of inoculating 1 million people per day, compared to hundreds of thousands daily in July.

He added Indonesia is seeking to follow in the footsteps of South Africa by partnering with the World Health Organization as a technology transfer hub for mRNA vaccines -- the technology used in vaccines by Moderna and Pfizer/BioNTech -- through state-owned vaccine maker Bio Farma.

The WHO last week announced it had formed a consortium with some South African entities to establish a transfer tech hub "to address the global imbalance of manufacturing capacity for COVID-19 vaccines."