Restrictions to be eased Monday if infections continue to ebb Calling the measures a "very tough policy that the government can't avoid," Widodo said in a speech Tuesday broadcast live on YouTube that "we've now seen a downward trend for both new cases and hospital bed occupancy rates."

"If this trend continues, then the government will gradually reopen [the economy] on July 26," the president said.

Hard-hit Indonesia's new daily infections over the past couple of days dropped to fewer than 40,000 from an average of 50,000 last week. But official data shows the reduction results at least partially from lower testing over the past few days, owing to the weekend and the Idul Adha holiday. Fewer than 130,000 people were tested per day since Sunday, compared with around 180,000 on some days last week.

The extension comes as little surprise but had been expected to be longer. Indonesia on Monday reported its deadliest day of the pandemic, with 1,338 new deaths. Southeast Asia's largest economy now leads the world in terms of new daily infections, followed by the U.K., Brazil, India and the U.S., according to Our World in Data.

Indonesia's average death toll over the past seven days of 1,080 is second only to Brazil's 1,200. Indonesian Muslims offer Eid prayers on the street July 20 amid a surge in COVID-19 cases in Bogor, near Jakarta.   © Reuters

Widodo said traditional wet markets would be among the first businesses to enjoy eased restrictions, allowing them to open longer through 8 p.m. with a 50% visitor capacity. Others include small business, such as street vendors and food stalls.

Indonesians observed a largely muted Islamic day of sacrifice, or Idul Adha, on Tuesday as the nation braced for longer restrictions on gatherings.

The government has imposed a ban on mass Eid prayers and street parades in areas declared as red and orange zones, and told Muslims not to crowd neighborhood livestock slaughtering sites. These curbs are in addition to tight restrictions -- set to expire Tuesday -- affecting all provinces on the densely-populated island Java, as well as in some other regions outside Java.

While most people appeared to be compliant, TV footage showed Muslims performing mass morning prayers on streets outside closed mosques in Jakarta and other major cities on Java. The butchering activities also drew crowds in many neighborhoods.

The latest surge has been attributed to the highly contagious delta variant, as well as a travel exodus and crowds during Idul Fitri, another major Islamic holiday, in May. Indonesia reported 38,325 new infections and 1,280 new deaths on Tuesday, bringing the country's totals to 2.95 million cases with 76,200 deaths.

Widodo had hinted Monday night that the government would likely extend the current lockdowns that have been in place since July 3.

"I understand that there have been aspirations for relaxation in economic and social activities, and these are possible if infections are low and admission rates to hospital for severe cases are also low," Widodo told a virtual briefing with regional leaders across Indonesia. "Imagine if the restrictions are loosened, and then cases climb again and hospitals cannot take in patients -- that would lead to the collapse of our health facilities."

He also urged regional heads to speed up disbursements of social assistance for the poor and others affected by the lockdowns. Sluggish distribution of aid has been blamed for many defying COVID rules amid lax enforcement in many regions. 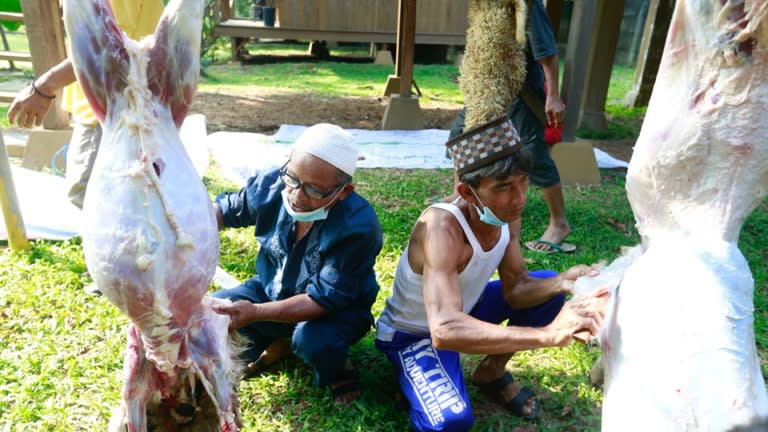 Volunteers prepare freshly slaughtered goats to be donated to poor people and patients with COVID-19 after a sacrifice ritual at a mosque in Bogor near Jakarta on Tuesday.   © Reuters

The Indonesian Medical Doctors Association, or IDI, also reported record deaths among medical workers. The IDI on Sunday said 114 doctors have died from COVID-19 so far this month -- nearly double the previous monthly high in January. A total of 545 have died since the beginning of the pandemic.

The fatalities among doctors is adding to the grim picture in the country that recently reported hundreds of deaths among patients self-isolating at home, as hospitals are overrun and suffering from oxygen and COVID-19 medication shortages.

"Even though they've been vaccinated, there continues to be deaths among medical workers due to surges in patients," IDI head of mitigation Mahesa Paranadipa told reporters on Sunday. "We've seen overloads and overworks throughout health facilities -- and we're worried they're causing trauma, burnouts and extreme exhaustion causing the health workers' immune system to drop."

The rising deaths among health workers are fueling doubts over the effectiveness of Sinovac jabs, especially against the delta variant, which led to the government's decision to give them a third shot using the Moderna vaccine as a booster. Indonesia's first Moderna shots were given to 50 doctors in Jakarta on Friday.

Indonesia has received over 140 million vaccine doses so far -- most in bulk form from China's Sinovac that needs further processing locally -- plus smaller deliveries of AstraZeneca, Moderna and Sinopharm vaccines.

But inoculations are still missing Widodo's target of one million jabs per day in July, and the roll out is especially low in regions outside Java and Bali islands. As of Monday, only 6% of Indonesia's 270 million population are fully vaccinated, less than half of the rate in Malaysia and similar to that in India.

Moody's Investors Service said in a Monday report that the resurgent infections pose "significant risks" to Indonesia's economic recovery and the government's plans to reduce the fiscal deficit to pre-pandemic levels.

"Beyond the increasing likelihood of a shallower economic recovery in 2021, Indonesia's economic growth and labor markets may suffer a greater degree of longer-term scarring from the current wave, making the return to pre-pandemic levels all the more difficult," Moody's added.