Indonesia prepares to open economy even as COVID-19 risk lingers

Up to 340,000 security personnel will enforce safety protocols People observe social distancing at a shopping mall in Tangerang, on the outskirts of Jakarta, on May 26.   © Reuters
ERWIDA MAULIA, Nikkei staff writerMay 28, 2020 12:00 JST | Indonesia
CopyCopied

JAKARTA -- "The new normal" is the catchphrase among Indonesian government officials seeking an exit from partial lockdowns across the sprawling archipelago.

But with the country still contending with a high number of new daily cases, policymakers are delivering mixed messages to an uneasy public.

President Joko Widodo on Tuesday began preparations for the new normal, which refers to the adoption of social distancing and other health protocols, such as mask-wearing and provision of hand sanitizer.

The measures are being introduced as some regions prepare to lift restrictions on movement. This includes Jakarta, which has seen a fall in new cases over the past two weeks and is scheduled to end its partial lockdown on June 4.

"We want to remain productive, but also safe from COVID-19," Widodo said during an inspection of a practice run for the new normal at a shopping mall in Bekasi, on the outskirts of Jakarta.

As many as 340,000 military and police personnel are being dispatched to four provinces: Jakarta, West Java, West Sumatra and Gorontalo, and 25 cities and regencies outside these provinces to support the program. Widodo said they will help local authorities enforce physical distancing and health protocols to further slow the spread of the virus, while educating them on new normal measures.

The Health Ministry, meanwhile, has issued a circular explaining health protocols that workplaces must adopt under the new normal. These include office hygiene, reduced overtime hours and providing fruit high in vitamin C or vitamin C supplements for employees.

Widodo said adoption of the new normal in different regions will depend on "figures and facts on the ground."

Wiku Adisasmito, the government's chief health expert on COVID-19, said separately that only regions with "good epidemiology indicators" will be allowed to loosen their movement restrictions. One criterion is the halving of daily new cases over the previous two weeks, even as testing increases.

By that standard, Jakarta is now classified at moderate risk, but some of its satellite cities, including Bekasi, Depok and Tangerang, remain at high risk. Meanwhile, Indonesia's second-most populous province, East Java, is seeing a rapid rise in new cases.

As of Wednesday, Indonesia had reported more than 23,851 cases, the second-highest number in Southeast Asia after Singapore. Its death toll, at 1,473, is the highest in East Asia outside China.

Some government offices are ahead of others in adapting to the new normal. The coordinating minister for the economy, Airlangga Hartarto, said civil servants at his ministry will begin returning to the office on Wednesday.

"The coordinating ministry for the economy is planning to take the initiative to work from the office selectively, by steadily implementing the health protocols," Hartarto said, according to local media reports.

"It is the government's duty in the economic sector to maintain growth so that 7 million unemployed people [before the pandemic] and 2 million others who've lost their jobs due to the impact from COVID-19 can get to work." 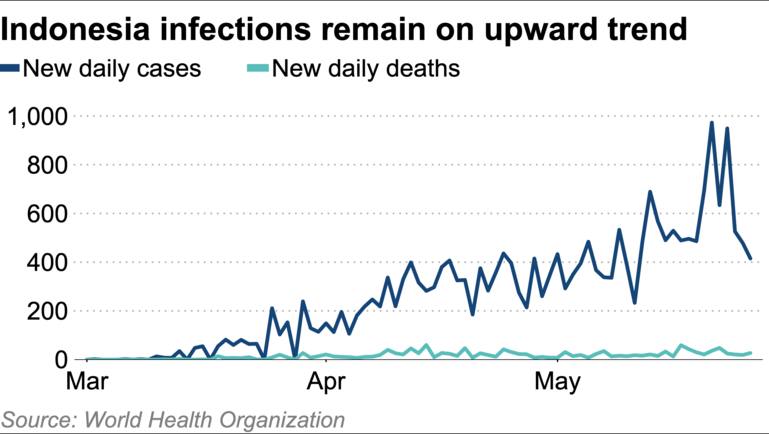 The government's new normal plans are backed by the Indonesian Employers Association, Apindo.

"Employers can only endure this situation until August. After that, we can no longer bear it. Massive layoffs can occur because there is no income," Apindo Deputy Chairwoman Shinta Kamdani said on Tuesday.

The public, meanwhile, is divided on the government's loosening measures.

Since officials started throwing out ideas for the new normal, those worried about the rising number of new cases, including medical workers, have made the hashtag #IndonesiaTerserah ("Indonesia whatever") a trending topic on social media. That reflects frustration with the government's coronavirus policies, which are seen as favoring economic considerations over health.

Critics lament Indonesians' ignorance of the virus threat -- many still crowd public places such as markets and mosques and ignored government calls not to return home during Ramadan, an annual tradition called mudik.

"We are fighting two pandemics, COVID-19 and stupidity," said one tweet doing the rounds.

But others approve of the government's plans. "It's easy for people who are financially secure [to criticize the government]. But others facing financial threats are thankful for the movement restrictions [relaxation]; they prefer that over dying of starvation," one person said.

The government's chief COVID-19 expert urges caution, including in Jakarta. A study by a team of researchers from the University of Indonesia School of Public Health estimates at least 1.7 million residents of Greater Jakarta left for their hometowns during mudik.

"If the mudik travelers who insisted on going back their hometowns return to Jakarta carrying the disease, they could create a second wave," Adisasmito said.