And there are worries that the more virulent Delta variant, which originated in India, might be spreading silently -- potentially worsening the new wave.

Indonesia on Thursday reported 12,624 new infections, the highest daily tally since late January. New cases have averaged over 9,000 a day over the past week, after a few months of hovering around half of that figure. A death toll of 277 the same day is the most since April.

Thursday's largest increases came in Jakarta, followed by West and Central Java. The three heavily populated provinces have seen alarming rises after the Islamic holiday of Idul Fitri in mid May, when wide travel restrictions imposed before and after the festivity deterring many -- but not all -- of the millions of people traveling to their hometowns and villages.

Bandung, the capital of West Java Province, on Wednesday announced a two-week lockdown, under which all tourist and entertainment spots in the city -- a favorite weekend getaway for Jakarta residents -- will close. Restaurants can only serve takeouts, the operating hours of traditional markets will be significantly reduced, and mosques only used for prayers and at half capacity.

Bandung Mayor Oded Muhammad Danial said the measures were taken as 89.7% of beds available for COVID-19 patients in the city's hospitals were occupied.

In Central Java, eight municipalities and regencies have been declared "red zones" and are imposing similar lockdowns. The province is a popular Eid exodus destination for people working in greater Jakarta.

"In some of the regencies and cities, the bed occupancy rates are approaching 90%. In Central Java at large it has reached 61%," Prasetyo Aribowo, secretary to the Central Java administration, told an online briefing on Thursday. He added that some facilities in affected regions had been converted to isolation wards for coronavirus patients. They include a psychiatric hospital and dormitories routinely used for local hajj pilgrims before their departure to Mecca.

Jakarta recently canceled a partial opening of schools, but is reluctant to impose another lockdown despite 78% of over 7,800 isolation beds and 73% of some 1,100 intensive care unit beds for COVID-19 patients being filled up as of Monday. Instead, the city opts to intensify so-called "micro" restrictions for neighborhoods or places where many new cases have been detected.

On Thursday, the Athletes' Village in central Jakarta, the city's main isolation facility for patients with mild symptoms, said it was opening an eighth tower in the sprawling apartment complex to accommodate an influx of 500-600 patients per day in the past week. A video of patients recently crowding one of the tower lobbies has gone viral.

"We currently have 5,730 [patients], the highest number since this emergency hospital was opened" in March last year, Muhamad Arifin, a manager of the facility, told local television station Kompas TV. The figure represented almost 80% of the facility's latest capacity.

The post-Eid surges have been expected -- Health Minister Budi Gunadi Sadikin had earlier said cases would likely peak five to seven weeks after Eid, which means they might still climb through early July. 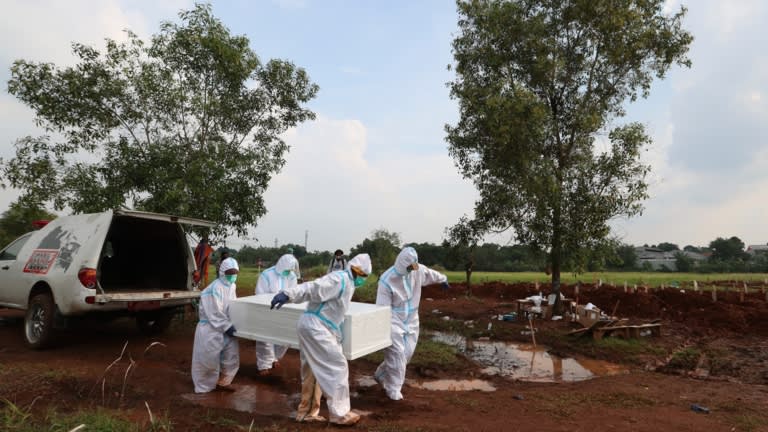 Workers prepare a coffin for burial at the special section of the Padurenan cemetery in Bekasi, West Java, Indonesia, on Thursday.   © AP

But the World Health Organization warns of another danger from what it calls "variants of concern" in its latest Indonesia situation update published on Wednesday. Indonesia's health ministry said earlier this week it detected 107 cases of the Delta variant -- which was responsible for India's deadly wave in May -- out of 148 cases from three WHO-listed variants of concern. That is a significant growth from 32 Delta cases detected the week before.

The WHO urges stricter measures. "With increased transmission due to variants of concern, urgent action is needed to contain the situation in many provinces."

"Drastic increase in bed occupancy rates this week in high-risk provinces is a major concern and necessitates the implementation of stricter public health and social measures including large-scale social restrictions," it added.

The surge is hitting the Indonesian rupiah. The currency dropped to around 14,430 rupiah per dollar on Wednesday, its lowest against the greenback in a month. While the move came as a result of U.S. Federal Reserve hinting it will make its first post-pandemic interest rate hike in 2023, concerns over the recovery of the Indonesian economy amid the rise in cases are also weighing on investors' minds.

"We expect the economy to grow between 4.1% and 5.1% in 2021, and in the second quarter, around 7%," said Perry Warjiyo, governor of Bank Indonesia, at an online press conference on Thursday after the central bank's monetary policy meeting. "But those numbers may need to be reviewed with the latest data, after the [rise in] COVID-19 cases."

President Joko Widodo has urged acceleration of Indonesia's inoculation program to counter the new wave. He said last week he wanted 700,000 vaccine shots to be delivered every day this month, and 1 million doses per day next month.

As of Thursday, roughly 22 million people had received their first vaccine shots and nearly 12 million others their second jabs -- or 54% and 30%, respectively, of the 40.35 million people targeted in the current inoculation phase.

But questions arise as to whether vaccines used in Indonesia -- most are from China's Sinovac, and a small portion from Sinopharm and AstraZeneca -- can provide protection against new variants of concern. Local experts, citing a study by Public Health England, pointed out only Pfizer and AstraZeneca vaccines had been proven effective so far against the Delta variant, while others have not been tested yet.

Reuters reported on Thursday that over 350 doctors and health care workers in the Central Java town of Kudus have contracted COVID-19 despite having received Sinovac jabs, with dozens being hospitalized. Kudus, where at least 28 Delta variant cases have been detected, is currently battling an outbreak

Masdalina Pane, deputy head of the Indonesian Epidemiologist Association, urges intensified testing and tracing to better detect new variants and mitigate their risks. Local experts earlier pointed out that Indonesia's positivity rate of over 20% -- in which 20% of those tested are confirmed positive for coronavirus -- reflects the country's severe undertesting.

Pane echoed WHO's call for wider containment measures, warning of "pandemic fatigue" among the Indonesian public that has caused many to stop wearing masks and abandon physical distancing.

"If there is no containment, no proper and swift control measures, I can say that in two weeks to one month, our [health facilities] will collapse," Pane said.