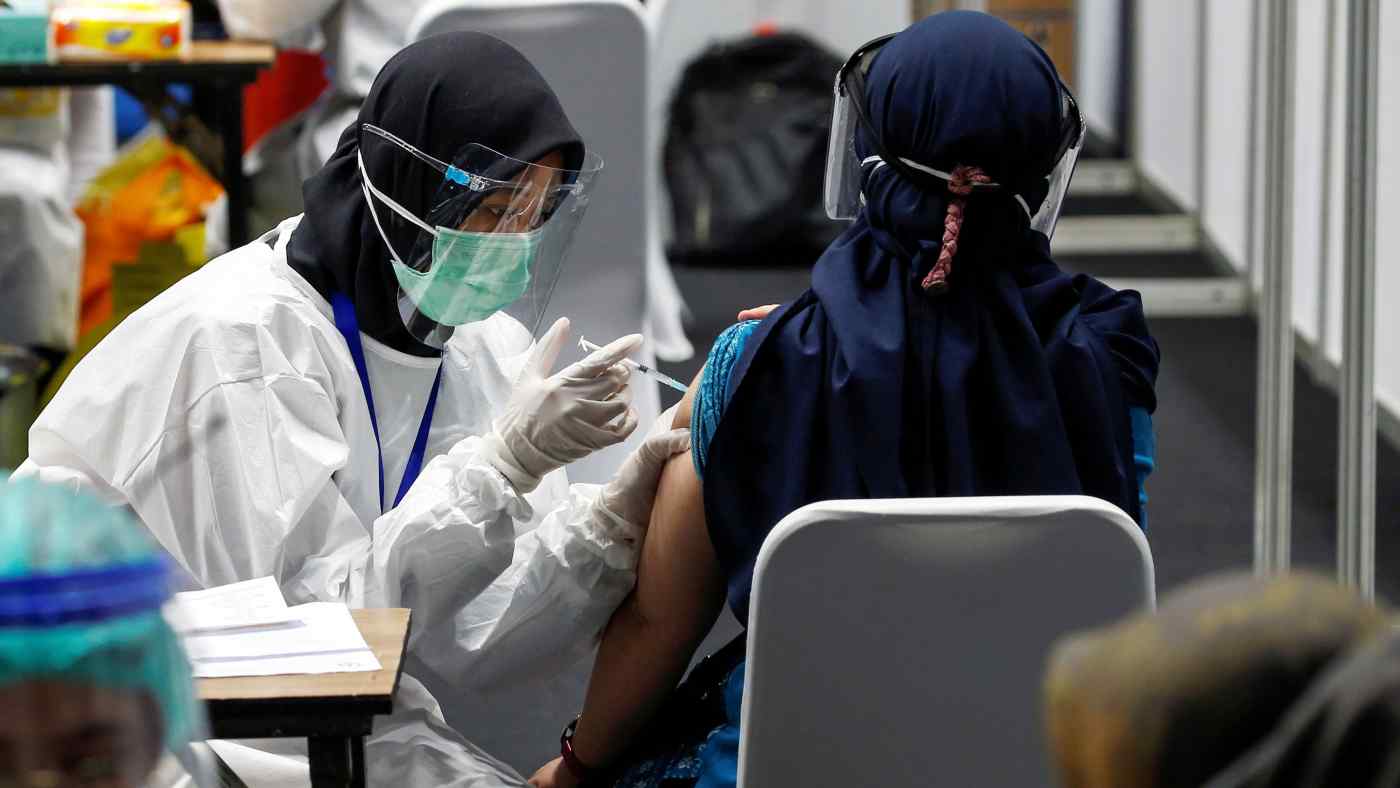 Nurul Avianti, a medic at a community health center in Kayu Jao, near the city of Padang on the island Sumatra, was one of the first in the country to be vaccinated in January.

"My entire arm felt sore, but just for a day," the 26-year-old told Nikkei Asia. "I felt all right and fit again the next day."

Indonesia is aiming to inoculate 1.5 million health care workers like Avianti by the end of February, before moving on to public servants and then the general public.

The program is now President Joko Widodo's top priority. The country had 1,183,555 confirmed cases and 32,167 deaths as of Wednesday, with the number of new daily infections showing little sign of slowing down. But in a country wider than the U.S. with an east-west span of more than 5,000 km and a population of 270 million -- the world's fourth highest -- scattered across some 6,000 inhabited islands, mass vaccination is a herculean undertaking.

The common view is that logistics form the biggest hurdle. Vaccines will be sent from Jakarta to more than 10,000 health facilities across a country generally lacking infrastructure, especially the cold chain storage needed to keep vaccines safely refrigerated.

And while Indonesia has been on an infrastructure spending spree since Widodo first took office in 2014, it still ranked 54th in terms of that measure in the World Bank's 2018 Logistics Performance Index, behind regional peers Malaysia, Thailand and Vietnam. A medical worker holds up a bottle of the Sinovac vaccine at an emergency hospital in Jakarta.   © Reuters

Bio Farma, a state-owned pharmaceutical company, is overseeing vaccine distribution and has already delivered 3 million doses across all 34 of the country's provinces, less than 1% of the 427 million the government believes it will need to inoculate 181 million people and achieve herd immunity. That figure is roughly 70% of the population that the health minister said accounts for all those above the age of 18 without serious comorbidity, pregnant women and COVID-19 survivors.

"One of the miscalculations was the cold storage capacity," said Nadia Tarmizi, health ministry spokesperson for the vaccination program.

"Some of the vaccines delivered to [rural] health facilities got stuck, or were even returned to provincial authorities because facilities were running out of cold storage capacity," she said. "We could not properly carry out our regular vaccination programs last year for things like polio and rubella [because of COVID-19]. Those unused vaccines were still in cold storage."

It is a problem that is making the government think outside the box. It recently enlisted the help of Unilever Indonesia -- a company with nationwide cold chain infrastructure -- which will reportedly supply 200 ice cream refrigerators for the vaccines.

The lack of cold storage could become more serious later this year when Indonesia starts receiving more vaccines. The country has so far placed orders for 329 million vaccines and hopes to receive the last batch by March next year, at the latest.

"There needs to be some way of keeping track of stock in real time to be able to say: this region needs more, this region has not used it all up yet, this region will need these sent" to manage the limited cold storage capacity, said Ines Atsmosukarto, CEO of Australian vaccine research company Lipotek. "If you can capture the condition in real time, then you would be able to organize from Jakarta, where I hope they should have a massive storage. But... real time tracking is easy to say, but not easy to do." Indonesian healthcare workers wait as they are being observed after receiving Sinovac's vaccine in Sleman, Yogyakarta, Indonesia.   © Reuters

Atsmosukarto is also concerned about electricity.

"I don't think there is any place in Indonesia that is not subjected to [sudden power outages]," she said. "All those places where the vaccines are stored, do they have power backup? For me that's the biggest issue they are facing."

That Indonesia must grapple with these problems actually reflects how proactive the government was in securing the vaccines -- Singapore was the only other country in the region able to start its program by January.

It is a sea change from early last year, when Indonesian government officials were constantly downplaying the risk of the coronavirus, citing reasons such as the power of prayer and the immune systems of Indonesians for the small number of infections in the country at that time.

The government has also been steadfast in relaying the message to the public that the Sinovac vaccines -- the only ones currently in Indonesia -- are safe for use.

The Indonesian Council of Ulama, the country's top Islamic body, was quick to issue a halal certificate to the vaccine, an important issue in the world's most populous Muslim majority country. When Widodo's vaccination was broadcast on national television, a large red drape with the phrase "Aman dan Halal" (safe and halal) written in white letters was hung at a makeshift vaccination station on the balcony of the presidential palace.

Even so, the country is rife with hoaxes about the virus, adding another layer of complexity to its vaccination rollout.

"All the medical workers here accepted the vaccine, but locals said they don't want to be vaccinated, as they are influenced by hoaxes," said Kasmiwarni, head of the community health center at Kayu Jao. "They believed that since this is a Chinese vaccine, the Indonesian Ulema Council was paid to issue the halal edict."

The Ministry of Communication and Information Technology had identified 149 hoaxes related to COVID-19 circulating in the country by Feb. 2. Some, such as a video claiming needles used in vaccinating state leaders are fake and retract when the syringe is pushed, are outlandish. Subtler ones claim U.S. pharmaceutical giant Merck says it is better to fight COVID-19 naturally than getting vaccinated. 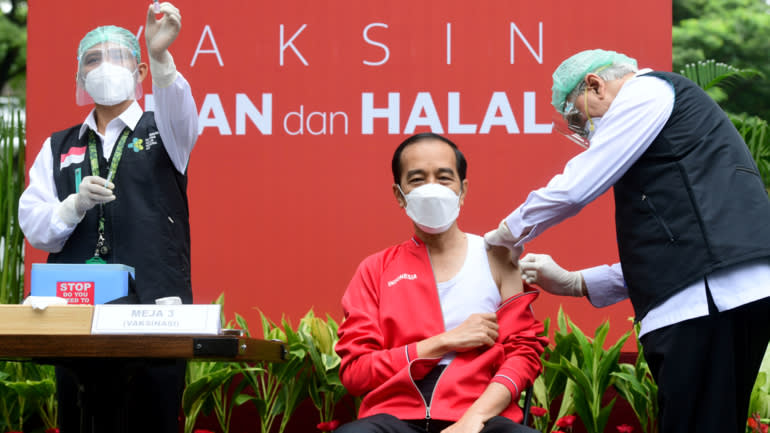 A slow rollout would be a problem for Widodo, not only because of the accumulation of cases, but also because of the economic toll. Millions have lost their jobs because of the pandemic and the country's economy suffered its first contraction in two decades last year. Widodo, whose political clout had been built on the economy's strong performance, is keen to get it back to normal quickly -- at one point even asking that the herd immunity timeline of 15 months be sped up to 12 months.

To expedite the program, Widodo and the health ministry are also pushing ahead with plans to involve the private sector.

Details have yet to emerge, but plans are for allowing companies to buy vaccines to give shots to their employees. The move has been supported by some, including the American Chamber of Commerce in Indonesia. "We welcome this initiative," Lin Neumann, its managing director, said in a news release. "We think the private sector can help the government through this program and we look forward to hearing more details."

But the plan is a source of concern among the medical community as it runs contrary to the idea of vaccine equity that is being promoted around the globe amid threats of vaccine nationalism.

"Vaccines are basically semipublic merit goods... but there are groups in society who feel they can afford the vaccine," said Iswanto Idji, coordinator for the Indonesian Medical Association's program to encourage vaccination. "[Allowing them to privately procure vaccines] could be a strategy to accelerate the vaccination program, but the government must control the price and availability so that it does not become commercialized."