Indonesia to roll out mass COVID-19 vaccinations next week

With 229m doses secured, vaccinating 67% of population may take over three years 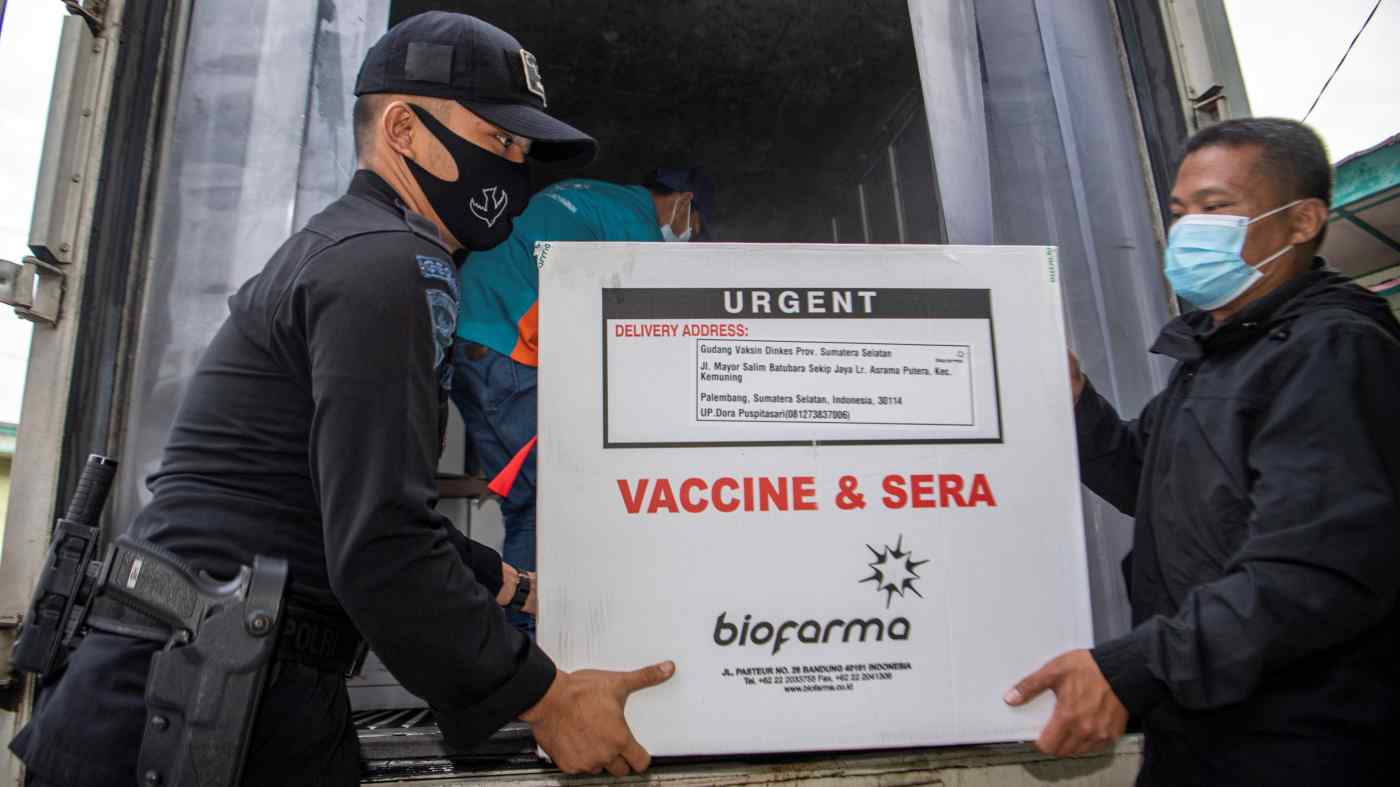 Indonesia has taken delivery of 3 million doses of China's Sinovac vaccine, as part of more than 229 million doses it has secured from pharmaceuticals around the world.   © Reuters
SHOTARO TANI, Nikkei staff writer January 4, 2021 20:28 JST | Indonesia
CopyCopied

JAKARTA -- Indonesia is set to start vaccinating its population against COVID-19 next week, a senior minister said, as the country tries to stem the spread of the virus and get its economy back on track.

Coordinating Minister for Economic Affairs Airlangga Hartarto announced the plans on Monday after a ministerial meeting. He added that the program is contingent upon emergency use approval from the country's food and drugs agency as well as the vaccine receiving a halal certification.

Indonesia has managed to secure more than 229 million doses of COVID-19 vaccines from pharmaceuticals around the world and has already received 3 million doses from China's Sinovac. It is also negotiating an additional 50 million doses each from AstraZeneca and Pfizer.

Indonesia's state-owned drugmaker Bio Farma has already distributed more than 700,000 doses from the 3 million to 34 provinces, the company said in a statement on Monday. The government's target is to vaccinate 1.3 million health workers initially.

Brazil's biologic research center said last year that Sinovac's shots had an efficacy rate above the required 50% mark, while Turkey's health authority said it showed an efficacy of 91.25% in local tests.

Indonesia has the highest cumulative COVID-19 cases in Southeast Asia, with 772,103 confirmed infections and 22,911 deaths as of Monday.

Health Minister Budi Gunadi Sadikin recently told the media that Indonesia would be looking to vaccinate 181 million people out of its population of 270 million to reach herd immunity. Indonesia is a sprawling archipelago of 17,000 islands that makes such a vaccination program a logistical nightmare.

President Joko Widodo pledged last year that Indonesians would get free vaccinations, and that he would be the first to take the shot to give people confidence that the jabs are safe.

While countries like the U.S. and the U.K., which have already begun vaccinations, are giving the shots to the elderly as they are the most vulnerable, Indonesia is prioritizing its working-age population. Those in the 18 to 59-year-old bracket will receive the vaccines after health workers and public servants.

The government believes that by vaccinating the more active and sociable group, it can stem the spread of the disease more efficiently. Jakarta also hopes that those in this age group will be able to return to their jobs and precrisis lifestyles, in turn, boosting domestic production and consumption.

The archipelago fell into recession for the first time in two decades in the three months ended in September, and the Asian Development Bank recently downgraded its growth outlook for Indonesia this year to 4.5% from a previous forecast of 5.3%.