Indonesia to tighten COVID restrictions in Bali and Jakarta JAKARTA -- Indonesia will impose two weeks of tighter social restrictions in the holiday destination of Bali and parts of Java, including the capital Jakarta, as the government scrambles to contain the spread of COVID-19.

Chief economic minister Airlangga Hartarto announced the additional measures on Wednesday, saying the decision was made to help reduce the burden on hospitals and lower the number of fatalities. "The government sees a number of things that need to be done in order to limit transmissions," he said.

The tighter rules will take effect on Monday and run until Jan. 25, covering 22 towns, regencies and regions across Java, the country's most populous island, as well as Bali.

Measures include having 75% of workers work from home, shopping malls close earlier and restaurants limit diners to 25% of their capacity. Some local governments in the affected areas have decided to reopen schools, but the new restrictions call on schools to remain closed and continue with online education.

Indonesia on Wednesday recorded its biggest daily rise in COVID-19 infections, with 8,854 new cases. Daily new cases have increased between 6,000 to 8,000 in recent weeks. The country has the highest number of cumulative cases in Southeast Asia, with 788,402 cases and 23,296 deaths. 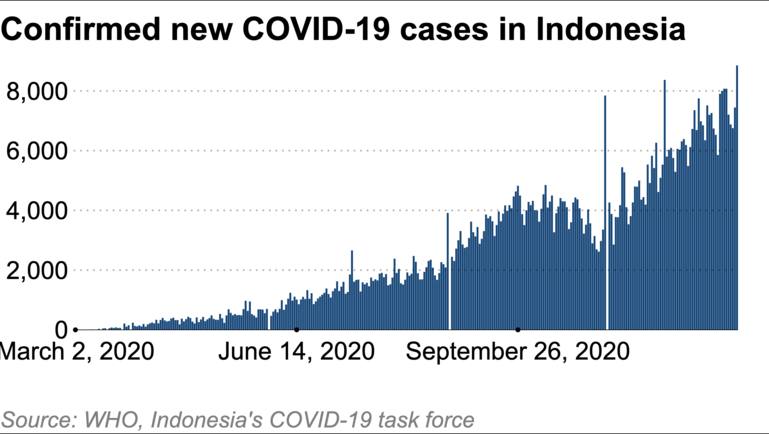 The government decided earlier this week to start what it calls a mass vaccination program on Jan. 13, with the president receiving the first shot. The country has received 3 million doses from China's Sinovac, and as of Wednesday, 1.2 million doses have been distributed to 34 provinces, said Budi Gunadi Sadikin, the country's health minister. He said the target was for all the received vaccines to be distributed by Thursday.

The health ministry had set a target of vaccinating 181 million of Indonesia's 270 million people in 15 months to reach herd immunity, but Sadikin on Wednesday said it will try to finish in 12 months.

While countries that have already begun vaccinations are putting seniors first in line, Indonesia is prioritizing its working-age population. After front-line health workers and public servants receive their shots, 18- to 59-year-olds will be vaccinated.

A hurdle remains, however, as the country's food and drug agency has yet to give emergency authorization to the use of vaccines.