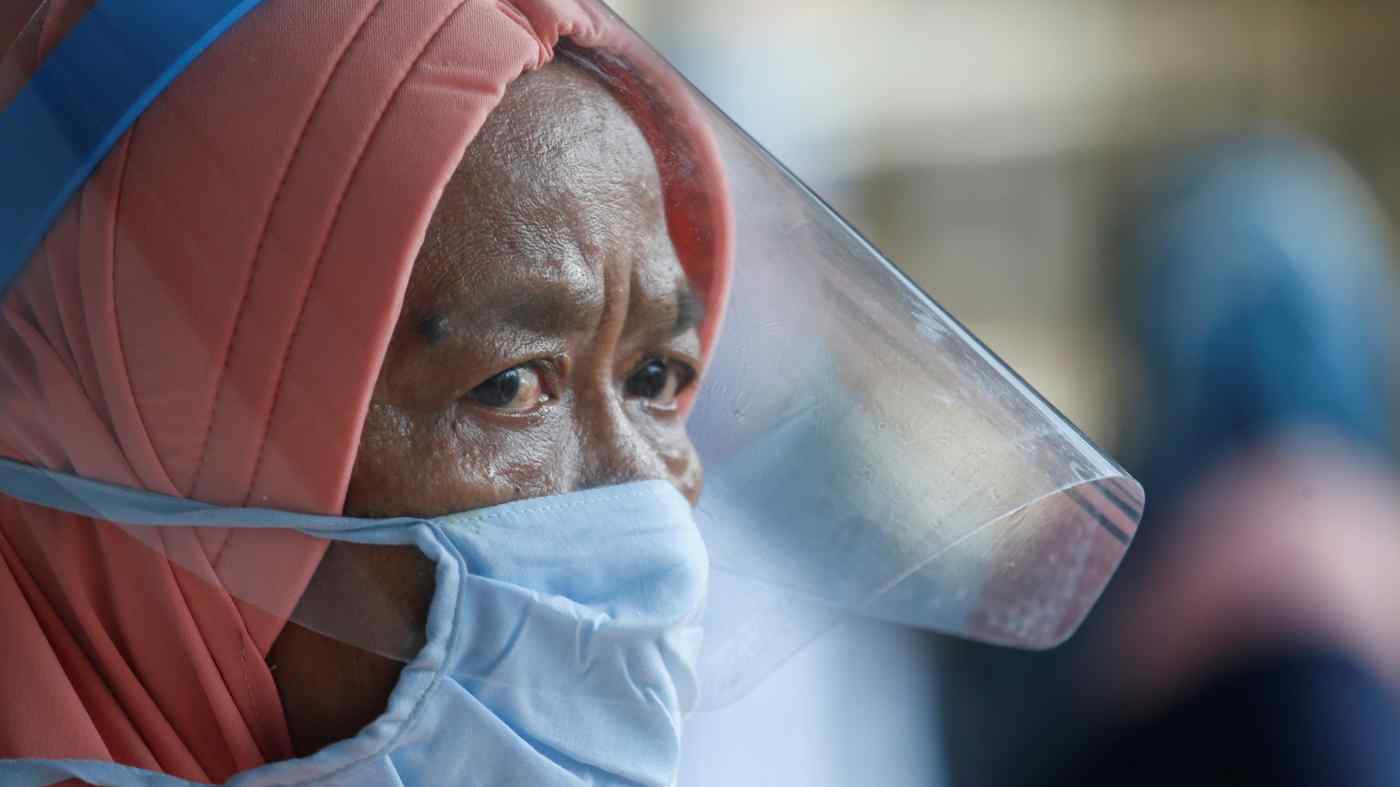 A woman wears a face shield and protective mask at a station in Jakarta as the government eases restrictions aimed at preventing the spread of COVID-19 on June 8.   © Reuters
SHOTARO TANI, Nikkei staff writerJune 17, 2020 18:42 JST | Indonesia
CopyCopied

The region's biggest economy reported an additional 1,031 infections, bringing its total to 41,431, while Singapore saw its figure rise to 41,216. Indonesia has seen an average of around 880 daily cases since early June, and now has the most confirmed cases in Southeast Asia.

Indonesia wants to gradually return to normal to shore up the flagging economy, but experts have warned that it may be premature to reopen as the virus has not yet been contained. The country has had 2,276 deaths in total, compared with Singapore's 26.

"It is somewhat of a consensus among the epidemiologists in Indonesia that the country hasn't even reached the peak of the first wave yet," said Laura Navika Yamani, epidemiologist at Airlangga University in Surabaya, Indonesia's second-largest city.

The country does not have a nationwide lockdown in place, but regional governments have imposed their own social restrictions, known as PSBB, from mid-April. But with millions losing jobs and the government wary of a spike in poverty, Indonesia is slowly trying to move back to business as usual. In Jakarta, offices and streetside restaurants have been allowed to resume operating, albeit with strict social distancing measures, while shopping malls reopened their doors on Monday at reduced capacity.

The country is even drawing up plans to restart regular travel to and from China, South Korea, Japan, and Australia -- four countries that are especially important to Indonesia in terms of investment and tourism.

"The current number of cases is not representative [of what's happening on the ground]," said Yamani. "Especially with loosened [social] restrictions, there will be more crowds that could potentially become new clusters of cases... The PSBB [period] is not long enough." The economic fallout from the pandemic condemned the country to its slowest expansion since 2001 in the first three months of 2020.

Finance Minister Sri Mulyani Indrawati said on Tuesday that she expected the economy to contract 3.1% in the second quarter. "With a very heavy [slowdown in] second-quarter growth, maintaining a positive [growth rate for 2020] will be very challenging," she said.

While Singapore's recent COVID-19 cases have largely been confined to tightly packed housing for migrant workers, coronavirus is being detected in all walks of life across Indonesia.

Jakarta continues to have the largest number of confirmed cases in the country, accounting for around 23% of total infections, but the East Java region, which includes Surabaya, now accounts for 20.5%. Khofifah Indar Parawansa, governor of East Java, said in May that the rapid increase in cases was due to increased testing.

Hospitals in East Java, as well as in other regions that accept COVID-19 patients, have beefed up security in recent days as families of people suspected to have died from the virus tried take the departed from facilities and give them traditional burials. At least six cases have been reported to the police; four in the city of Makassar in South Sulawesi, one in Surabaya in East Java and one in the Bekasi region, just east of Jakarta.

Muslim funeral practices include family members washing the dead from head to toe, but government procedure calls for COVID-19 victims to be wrapped in plastic and buried quickly to prevent the spread of the virus, robbing relatives of grieving time.

"The reason why families try to forcibly take the body of their relatives is because often when the person dies, there is no certainty whether the body is COVID-19 positive or not," said Brigadier General Awi Setiyono, head of the National Police Headquarters Information Bureau. He said patients sometimes die before their test results come back, which usually takes around a week under the government scheme.

"The Indonesian National Police has issued a letter to authorities to encourage hospitals to carry out swab tests and PCR tests on the deceased," Setiyono said. "Patients can be buried in their respective religious rituals if proven negative, but funerals still must pay attention to health protocols."