Vaccine disparity in country of 17,000 islands casts shadow on recovery 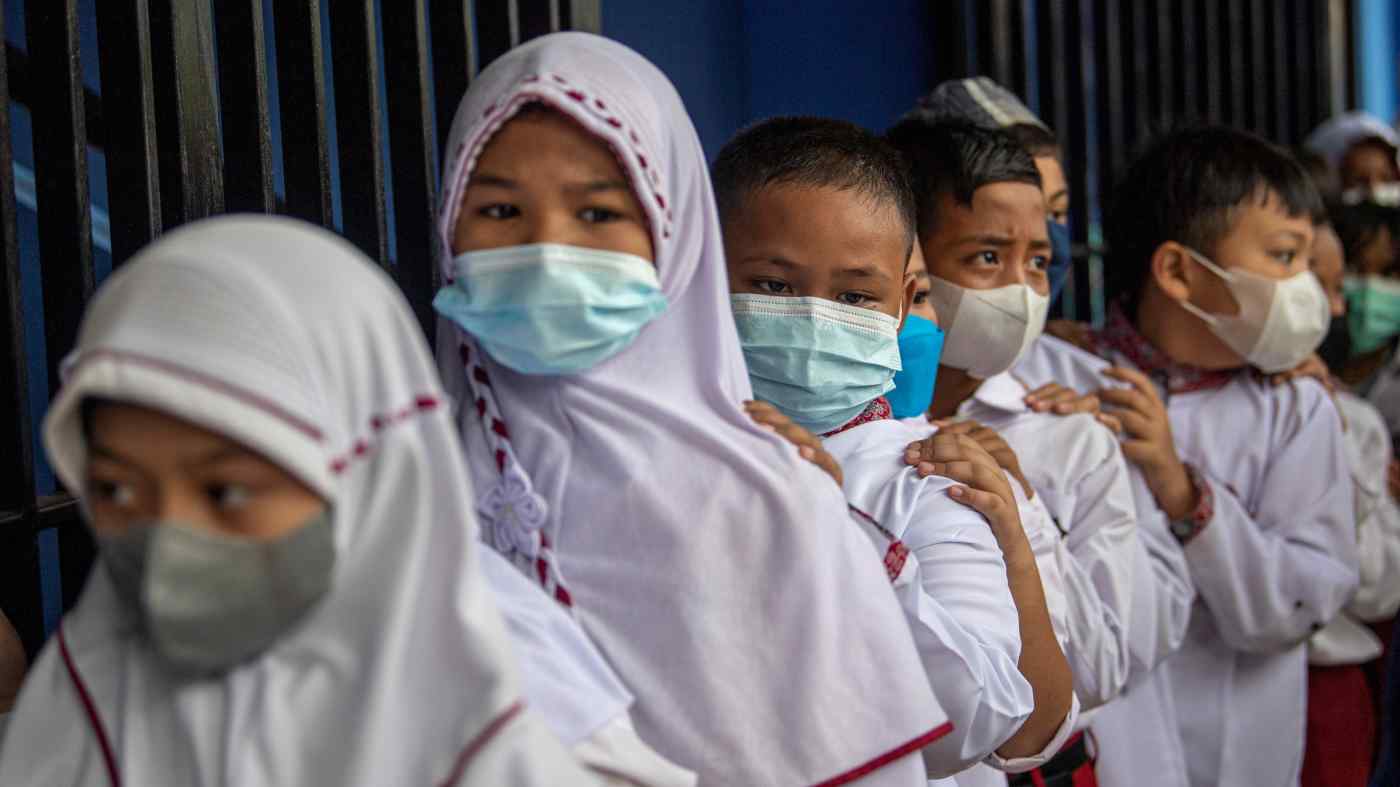 JAKARTA -- As coronavirus cases surge in Indonesia, its government is again facing a tough balancing act between stopping the spread of the virus and keeping the economy going.

For a country that needs its economy to grow at a steady pace to absorb an ongoing influx of new labor -- it added an annual average of 2.3 million people to its labor force over the past five years -- the government cannot easily hit the brakes on productivity, as it did earlier in the pandemic. This is particularly so when the economy is finally showing signs of revival.

But with only around half of its population fully vaccinated with two shots, and with big gaps in the takeup rate between provinces, there are lingering concerns that focusing on the economy could endanger lives.

"The government has continued to look for a balance point for gas and brakes. We should not apply the brakes too deeply and not release the gas too loosely," Coordinating Minister of Maritime Affairs and Investment Luhut Pandjaitan, who also heads up the country's COVID response, said on Monday as he announced a partial tightening of restrictions across the islands of Java and Bali.

A day after the announcement, Indonesia recorded 57,049 new cases, and the daily count has since then exceeded 60,000. Most are believed to be the omicron variant of COVID, and the peak has surpassed the second wave caused by the delta variant last year. 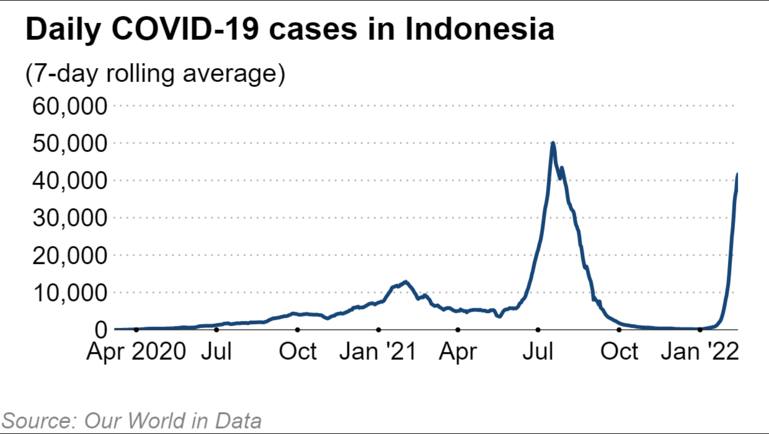 Despite the partial tightening, restrictions are lax compared with the height of the delta wave, when shopping malls were closed and employees in nonessential sectors were all required to work from home. This is in part because although omicron is proving to be highly transmissible, its symptoms are thought to be milder and mortality rates lower, allowing the government some room in implementing restrictions.

The country is also hosting G-20 meetings this year in an online-offline hybrid format, but tighter COVID curbs may make it difficult to host face-to-face meetings.

An official at the health ministry told Nikkei Asia that the government "estimates that daily new cases could reach 100,000 to 150,000" during the peak of the third, or omicron, wave. But "the government has not planned to implement [social restrictions] at the highest level, so that the community's economic activities can still continue, so that there is no slump in the national economy," the official said.

The government's moves have the support of some experts. "High cases become worrying if the treatment at hospitals explode, like we saw with the delta wave," said Pandu Riono, epidemiologist at University of Indonesia. "Currently the conditions are proven to be far from last July" during the delta outbreak. Data from the health ministry showed national bed occupancy rate of 32% as of Feb. 14, much lower than the 54% recorded on Aug. 6 during the delta wave last year when hospitals were overloaded.

"As long as [the care in hospitals] is under control without an occurrence of overwhelming cases or critical-care bed crises, there is nothing to worry about," Riono added.

But other experts are worried about the combination of Indonesia's low vaccination rate and omicron's high transmissibility.

Despite being one of the first countries in Southeast Asia to kick off its vaccination program in January 2021, Indonesia has fallen behind Malaysia and Thailand which have vaccination rates of more than 70% each, and the Philippines with around 55%, according to Our World in Data. 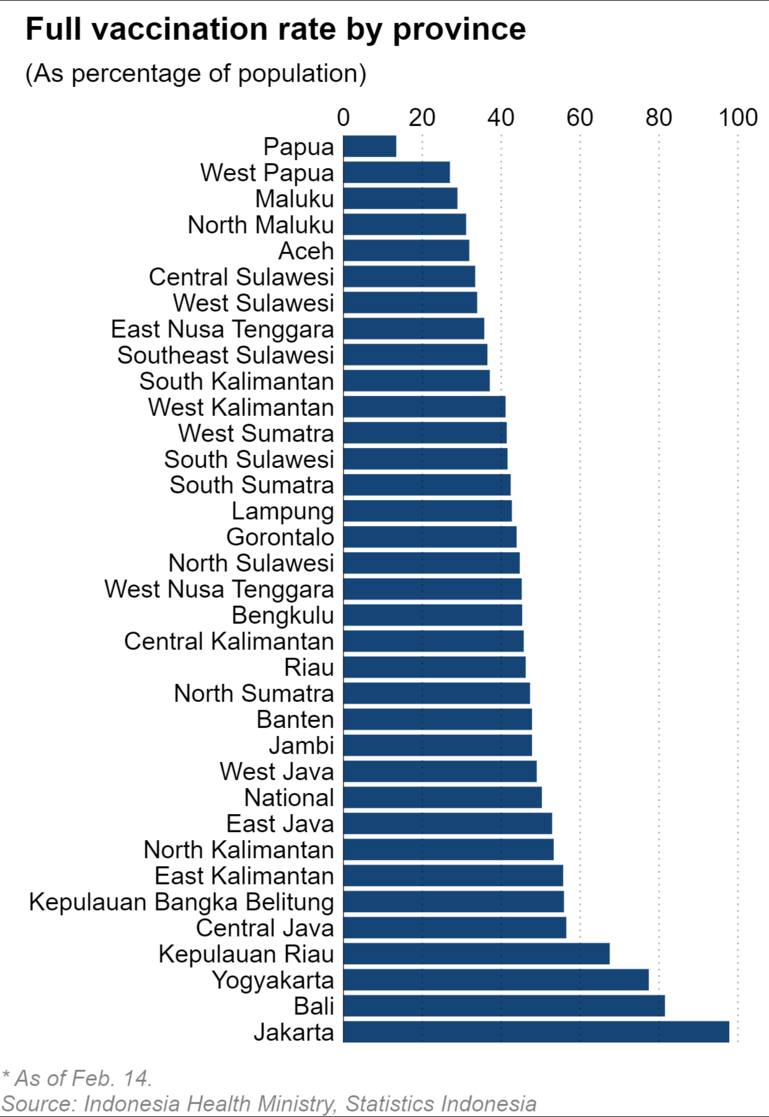 In a country made up of around 17,000 islands, logistics is a big challenge, while vaccine hesitancy, like in many other countries, also likely played a part.

"This disparity is indeed what causes a lag in the spread or peak of the increase in cases [especially] between Java-Bali and outside Java-Bali," said Laura Navika Yamani, epidemiologist at Airlangga University, adding that during the delta wave, cases and hospitalization rates lagged one to two months in the areas of low vaccination.

"While [provinces in] Java-Bali are already sufficiently protected with the majority of omicron cases having mild or no symptoms, that won't likely be the case in places outside Java-Bali due to inadequate vaccination coverage," she said.

She also warned of the risks of waning protection against COVID-19 even for the vaccinated as antibody levels decline over time.

"I have observed in Jakarta that many cases of omicron occur in patients who have received the full dose of vaccine more than six months ago," she said. "Pursuing the two dose vaccination target is urgent in areas outside Java-Bali, while in Java-Bali, especially areas such as Jakarta and Surabaya, it is urgent to pursue a booster."