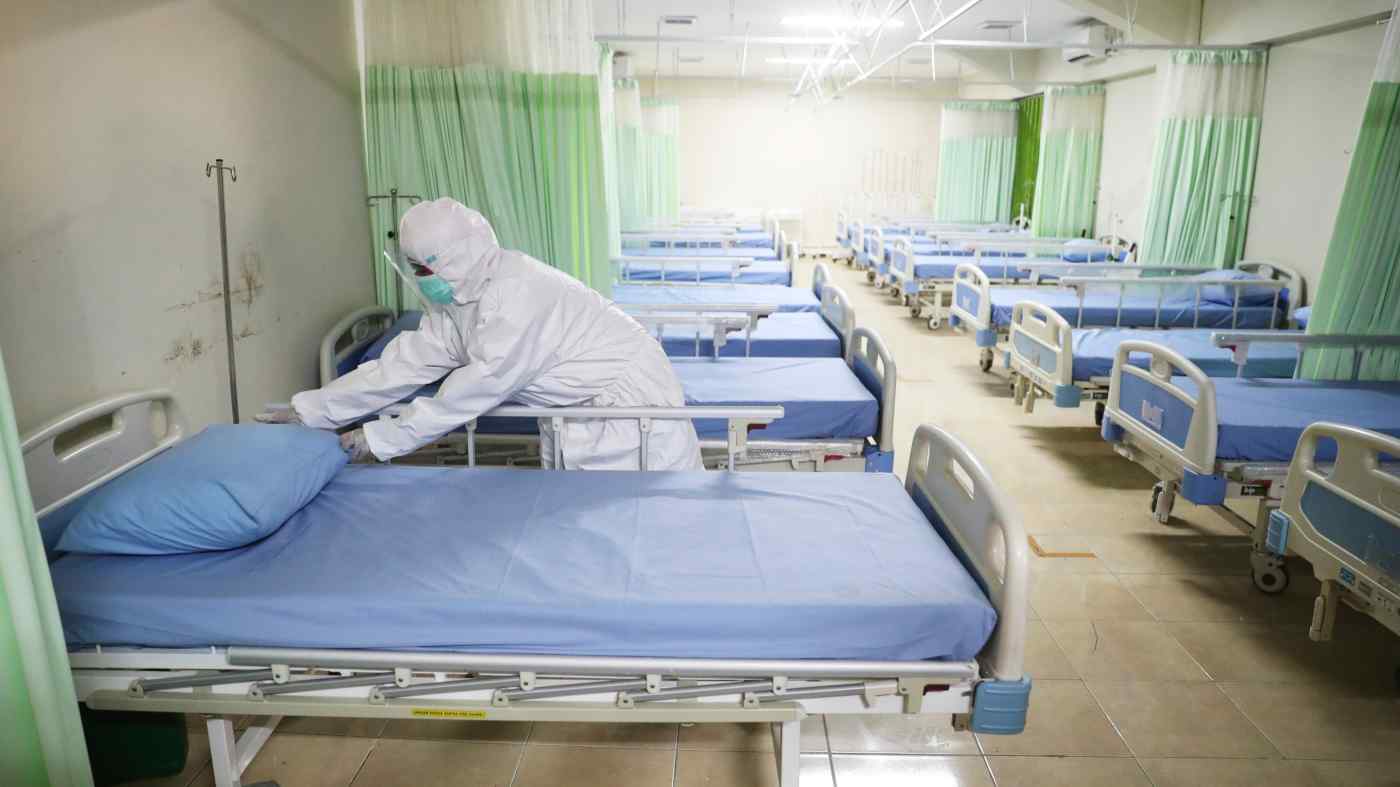 JAKARTA -- Indonesian central government officials are trying to thwart the Jakarta governor's plan to reinstate large-scale movement restrictions in the Indonesian capital from Monday, refuting his claim that hospitals are running out of beds for coronavirus patients.

Chief economic minister Airlangga Hartarto told reporters Thursday that senior cabinet members and the governors of Jakarta and its surrounding provinces agreed there should be a "balance between COVID-19 preventive measures and economic recovery considerations."

The minister played down the Jakarta governor's concerns over "drastic" rises in COVID-19 infections and deaths since mid August, repeating previous remarks that Jakarta's recovery rate -- the number of those who have recovered versus the total infected -- is higher than the national average, at 75% versus 71%.

He added the government continues to work on increasing hospital bed capacity for COVID-19 patients, through means such converting some hotels into treatment facilities as well as opening up more towers in the former Asian Games' athletes' dormitory compound in central Jakarta as isolation facilities for patients with mild symptoms.

"The government has enough funds and... is reassuring all regions, including Jakarta, that the government will keep maximizing the capacity of our health facilities," Hartarto said. "The government asserts that there is no such thing as limited health capacity."

He added the central government and regional administrations must handle the COVID-19 outbreak and economic problems "in one language and action."

The minister's remarks stand in contrast to Jakarta Gov. Anies Baswedan, who on Wednesday night announced he would reinstate large-scale movement restrictions next Monday. Under this plan, most offices and public spaces will be closed, schools will remain shut and restaurants will be open for takeout orders only. Mosques will be allowed to open only in neighborhoods confirmed to be free from coronavirus infections. A worker sweeps in front of an board showing share prices at the Indonesia Stock Exchange on Wednesday: Stocks fell sharply after the capital reinstated widespread public closures.   © Reuters

As in April and May, when Jakarta first imposed the restrictions before relaxing them in June, only 11 essential industries -- including food, finance, construction and logistics -- will be exempt, and even they will have operational limits, Baswedan said.

"As in the beginning of the pandemic, we'll do work from home, study at home and pray at home. This is a more [severe] emergency situation than earlier, so do not leave home unless you have to," he said.

The governor said the number of infections and deaths due to coronavirus in Jakarta had risen drastically since mid-August, raising concerns that hospital and intensive-care beds for COVID-19 patients in the Indonesian capital will be full as soon as next week.

"Jakarta currently has 4,053 isolation beds for COVID-19 patients. As of yesterday, 77% were in use," he said. "If this situation keeps on going, if we don't pull the brake, based on our projection, the isolation beds will be full by Sept. 17 and after that we won't be able to accommodate any more COVID patients."

"But if it is not accompanied by tight [movement] restrictions, even these [new] hospital beds will be full by the second week of October."

Indonesia's new daily infections reached a new high on Thursday, with 3,861 cases over the last 24 hours, and 120 new deaths.

Jakarta has reported 50,671 coronavirus cases, the highest among Indonesia's 34 provinces, and 1,351 deaths. But the number of funerals applying health protocols for COVID-19 has exceeded 5,000, according to data from the Jakarta government's website.

Nationwide, Indonesia has reported a total of 207,203 cases and 8,456 deaths. While the number of infections is the second-highest in Southeast Asia after the Philippines, it is No. 2 in Asia for deaths, behind only India.

Baswedan said office clusters, as well as dine-in restaurants and public transport, have all contributed to Jakarta's significant rise in cases in recent weeks.

"The president two days ago urged all of us not to restart the economy before [public] health is under control. Seeing this emergency situation, we do not have much choice but to pull the emergency brake as soon as possible."

Following the governor's remarks, the Jakarta Composite Index fell 5% on Thursday to its lowest point since late June. This triggered a 30-minute circuit breaker during morning trading.

The central government's spokesman for COVID-19, Wiku Adisasmito, expressed his support for the Jakarta governor's plan during a press conference later in the day -- but it is unclear as to whether his remarks carry any weight.

"During the last five weeks, all municipalities in Jakarta are indeed in the red zone. It shows a high infection rate, therefore tightening [of restrictions] is needed," Adisasmito said. "And we have to accept this reality. We have to take one step back in order to have a ... normal life in the future."

President Joko Widodo has not said anything on the matter. It is not immediately clear how the Jakarta administration will respond to the chief economic minister's statements.