BEIJING/GUANGZHOU/SHANGHAI -- Coronavirus cases are climbing fast in economically vital Chinese coastal cities, far from the outbreak's epicenter, raising uncertainty over how many multinational manufacturers will be able to resume production next week.

Nikkei calculated the concentration of confirmed cases in 10 large Chinese cities -- including Wuhan, where the virus is believed to have originated -- based on population data from the central government.

Rates of cases per million residents in urban areas, where most of the travelers who carried the virus from Wuhan reside, surged two- to fourfold over the week through Thursday.

Some of the highest concentrations were found in Zhejiang and Guangdong, two provinces where the private sector plays a big role in the economy. A slowdown in these provinces, which generate nearly one-fifth of China's gross domestic product, risks compounding the economic damage caused by the outbreak.

The highest density of cases outside Wuhan -- which had 2,017 per million -- appeared in the Zhejiang port city of Wenzhou, with 277. The city had 421 cases in an urban population of about 1.5 million.

The city is known as a cradle of small business, with a focus on light industry such as apparel, and its entrepreneurs travel all around the country. Roughly 200,000 Wenzhou natives are thought to live in Wuhan about 900 km away, and many returned home to visit family for the Lunar New Year holiday, giving the virus a chance to spread.

Wenzhou residents face strict limits on activities, with only one person per household allowed to go out at a time, and businesses are ordered not to reopen until after Feb. 17.

Hangzhou, the capital of Zhejiang Province, is also high on the list with 42 cases per million, nearly four times the concentration in nearby Shanghai. The city hosts the headquarters of Alibaba Group Holding, which has told employees to work from home. The e-commerce giant had wanted staffers to return to their offices Monday, but now has extended the telecommuting period to Feb. 17.

"Because places like Wenzhou and Hangzhou have brisk economic exchanges with other cities, they have a large number of cases relative to their populations, which makes it difficult to resume operations," said Wu Junhua, research director at the Japan Research Institute in Tokyo. 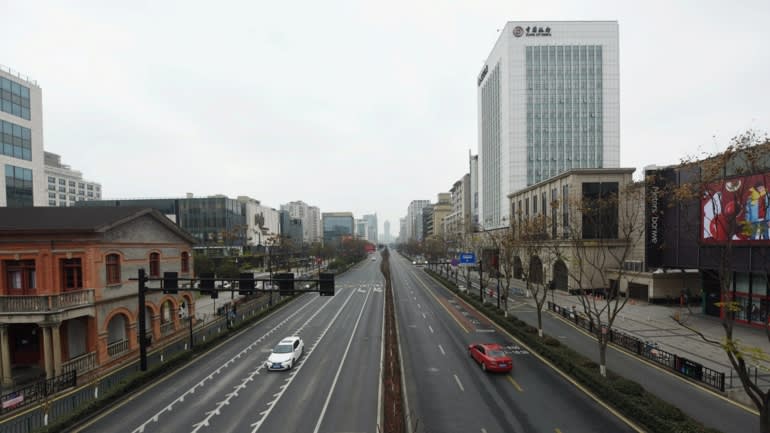 Commercial areas remain quiet in the Zhejiang Province capital of Hangzhou, which had 42 coronavirus cases per million residents as of Feb. 6.   © Reuters

Guangdong Province, on China's southern coast, also has been hit hard by the outbreak. The provincial capital of Guangzhou has 44 cases per million, and Shenzhen, a major production center for smartphones and other electronics, has 26. Both figures roughly tripled over the past week -- the fastest pace of growth outside Wuhan.

Shenzhen-based Huawei Technologies, the world's largest telecommunications equipment maker, resumed business Monday. A source chalked this up to the telecom industry being a part of the infrastructure sector. But peer ZTE, also based in Shenzhen, is waiting until at least next week to reopen.

Guangzhou is an auto industry hub, housing factories for Toyota Motor, Honda Motor and Nissan Motor. Toyota pushed back the restart of its plants in the city by a week to Feb. 17 at the earliest. Honda plans to reopen Monday but expects to need more time before production is in full swing.

Conditions in Guangzhou itself are not the only factor. Given the lockdown in Wuhan, a key source of auto parts, "it might be difficult to return to full operation at our Guangzhou facilities" by the end of February, said a representative at a Japanese automaker.

Office equipment manufacturer Ricoh has postponed opening a new plant in Guangdong by a month from the original date in April.

Companies reopening on Monday worry that contact among workers will create opportunities for the virus to spread.

"For now, we're asking employees to keep working from home from the 10th on," said a representative for a Japanese electrical equipment company.

Many people continue to avoid going out or traveling for fear of infection. This could hamper plants in Guangdong that rely on migrant workers from areas such as Hubei Province, where Wuhan is located.

If the outbreak drags on, "it'll become tougher to find labor for construction projects," said a construction industry source in Guangzhou.

China's two largest cities have fared better, with 11 cases per million in Shanghai and 16 per million in Beijing. Shanghai moved quickly to curb the outbreak, screening people entering and leaving the city. Beijing remains on alert but has let government offices and public transportation continue operating.

The northeastern city of Dalian boasted the lowest concentration of cases, with just 4 per million.