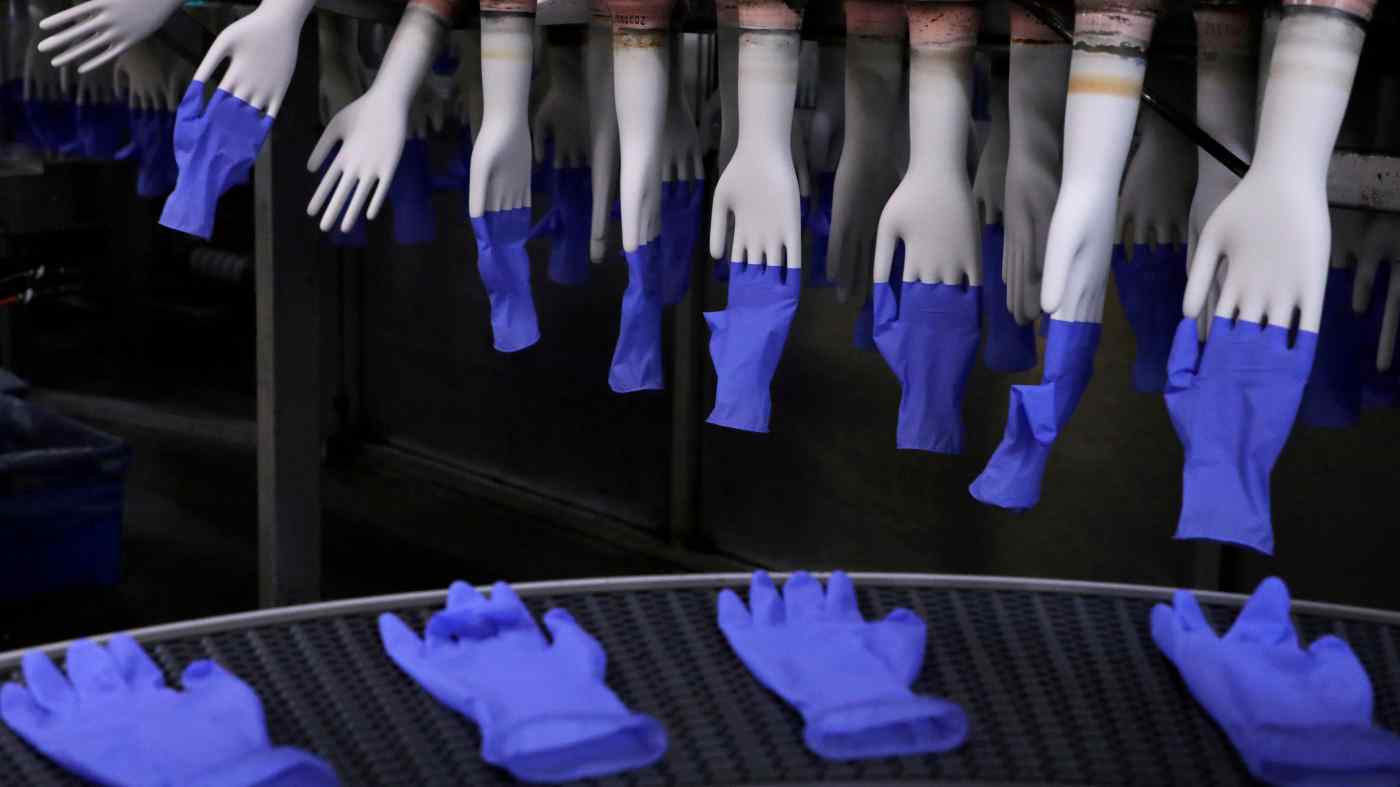 KUALA LUMPUR -- Glove manufacturers were among the highest-grossing stocks on the Malaysian bourse last year, elevating their already-rich owners to be new billionaires. The spike in share prices was in tandem with booming demand for rubber gloves as essential personal protective gear in fighting the COVID-19 pandemic.

The share prices of Malaysia's top three glove producers -- Top Glove, Hartalega and Supermax -- reached all-time highs, growing by 445%, 249% and 1,599%, respectively, in the last 12 months, far outperforming the 38% growth between the lowest and highest points of the bourse's benchmark FBM KLCI index in the last year.

Share prices and investors' decisions are external factors that are not within the producer's control, Top Glove responded via email to Nikkei Asia.

"On our part, Top Glove will continue to focus on managing our business well, so we are able to consistently deliver the strong and healthy results our stakeholders have come to expect from us," added the company, which claims to control 26% of the global rubber glove market.

Ever since news of the Pfizer COVID-19 vaccine's approval in the U.S. broke on Dec. 12, the share prices of Top Glove, Hartalega and Supermax have dwindled 10%, 7% and 17%, respectively, through Feb. 25.

On top of that, the glove industry has also been smeared with allegations of abuse of foreign workers in filling the tall orders, to the extent that import restrictions have been discussed in Australia, the U.S. and Denmark. In July last year, the U.S. banned imports from two subsidiaries of Top Glove over concerns of forced labor.

According to Top Glove, demand for medical gloves will remain intact even with the rollout of vaccines because immunization procedures, too, require medical gloves and because hygienic awareness will stay high post-pandemic.

The producer is confident that demand will not plunge to pre-pandemic levels.

"Pre-pandemic, global glove demand was already growing about 10% and is expected to continue to grow steadily driven by strong market fundamentals across all geographies," it added. The current financial year, ending Aug. 31, also started well for Top Glove, with sales in the quarter from September to November reaching 4.8 billion ringgit, up 294% compared with the same period of the previous year while its net profit jumped 20 times to 2.4 billion ringgit.

Top Glove is keeping marketing momentum by advocating the use of gloves during vaccinations to prevent and protect from skin injuries, recommending a "double-gloving" concept that involves using nitrile gloves as the inside layer and stretch polyethylene collective protective equipment (CPE) gloves as the outside layer.

"The outside layer of CPE gloves, which is 10 times more affordable than nitrile gloves, is to be changed and disposed of after a single use," the company says.

Ng Bei Shan, an analyst at Malaysian Industrial Development Finance, told Nikkei Asia that demand for gloves is expected to remain sturdy due to the supply-demand imbalance.

"We believe that gloves are still an important part of the PPE [personal protective equipment] to protect front-line workers, and we think the hygiene awareness for the developing countries has increased following the experience of this pandemic, and that may drive growth in glove consumption per capita," she said.

An analyst at CGS-CIMB Research also agreed that demand is expected to remain robust, with higher health care awareness especially in countries that previously had low glove use, such as China and Indonesia.

"People also tend to forget that gradual reopening of more sectors such as airlines as well as food & beverages would also spur usage of gloves in the nonmedical sector," the analyst said in a written communication.