TOKYO/SINGAPORE -- Israel's recent surge in coronavirus infections despite a standout vaccination campaign has raised fears of a never-ending battle. But experts in the Middle Eastern state as well as Asia paint a nuanced picture of the Israeli experience, drawing lessons and even glimmers of hope about learning to live with COVID-19.

Likely to be watching Israel's outcomes closely are Asian countries such as Singapore, which late last month announced an 80% vaccination rate and where cases are also on the rise, albeit modestly by global standards. The city has mapped out a policy to treat the virus as an endemic disease.

On Thursday, Israel reported an all-time high of 11,187 cases for the previous day, according to local media. This was partly due to more aggressive testing, but the numbers are startling from a country that had vaccinated over 60% of its population with the full two-shot Pfizer regimen and was seeing single-digit cases as recently as June. Unvaccinated individuals accounted for over 6,000 of the new infections, but over 4,000 had been fully inoculated, the Health Ministry's dashboard shows.

In a global first, the Israeli government has resorted to recommending third "booster" shots to everyone aged 12 and up, effectively changing what it means to be "fully vaccinated."

Still, when professor Eyal Leshem of Israel's Sheba Medical Center takes stock of the situation, he sees some positives.

"All this is in the background of almost full normal activities," the infectious disease specialist said, comparing the current wave to one that triggered a lockdown in January. "While kids were on school vacation, commerce and events have continued to happen. The only significant restriction was indoor face masks." 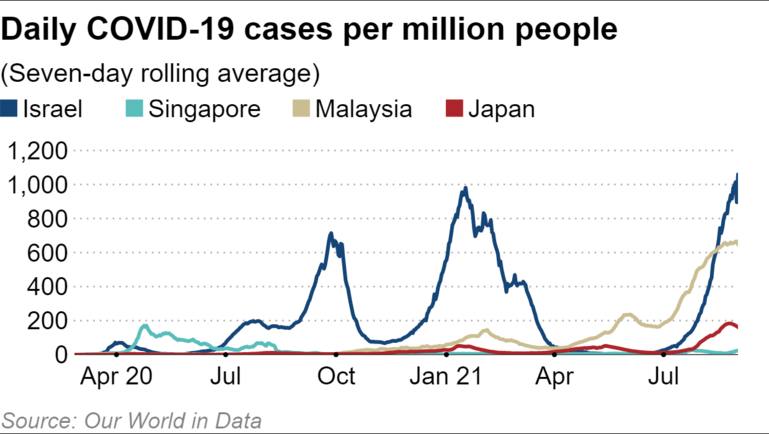 Even without an economic shutdown, the number of severe cases remains well below the 1,100-plus seen in January. The latest Health Ministry data shows the severe figure was 752 last Sunday but was down to 673 on Thursday. The dashboard shows around 20-30 daily deaths lately, less than half the rate in January.

"We've seen excellent protections from two doses of the vaccine," Leshem stressed. "When we actually look at disease rates -- not absolute numbers, but disease rates -- we see that the rate of severe disease in unvaccinated people is almost 300 per 100,000, whereas in fully vaccinated [with two shots] the disease rate is 19 per 100,000. This is for persons aged over 60."

Professor Paul Tambyah, president of the Asia Pacific Society of Clinical Microbiology and Infection in Singapore, made a similar point and suggested what is happening in Israel supports the notion that the only option may be to coexist with COVID-19. Daily cases in the city-state are creeping toward 200, also up from single digits.

"Although the numbers in Israel are high, the number of severe cases and deaths is a lot lower than during previous surges before the vaccination campaign," Tambyah told Nikkei Asia. While he noted Israel has different demographics to Singapore and a significant proportion of people unlikely to get jabbed, he said the trends suggest "we might have to accept more cases as long as there is not a corresponding rise in severe cases and deaths." But if two shots can achieve such an outcome, why is Israel rushing to give everyone a third?

Leshem explained that the government understood that the more infectious delta variant, if it circulates even in a well-vaccinated population, will still bring higher numbers of "fully vaccinated and hospitalized" patients -- "what we call breakthrough infections."

Compounding the government's concern was a study by prominent Israeli experts suggesting "a strong effect of waning immunity in all age groups" six months after vaccination.

While Israel was the first to go all-in on third shots, the U.S. and numerous other countries have either started or made plans for extra jabs. Singapore, too, on Friday said it intends to give boosters to seniors and certain immunocompromised individuals.

Third doses have stirred ethical and scientific debates, however, especially for broader populations.

The World Health Organization has warned that boosters will suck up more supplies desperately needed in poor countries. Tambyah, meanwhile, said before Singapore's decision on Friday that there is "no solid evidence that a routine third dose of the vaccine is necessary." A man receives his third dose of the COVID-19 vaccine in Jerusalem in mid-August.   © Reuters

Leshem said one could argue protection is still sufficient without boosters, or that people vaccinated later had more time to be infected, "priming" them with extra antibodies. However, he said that there is some data suggesting boosters work, and that "what we think now is that the slowdown of disease rates is also partially attributed to the booster."

Israel had given third doses to 2.48 million people as of early Friday.

If data ultimately determines that third shots are necessary, it would raise a question: Will we need fourth or even more doses? Leshem said this was "difficult to predict" but indicated an endless cycle is not inevitable.

"The natural course of infectious disease is usually characterized by a new equilibrium," he said. "What this means is, it's difficult to say when, but in a few months or years we may reach a stage where the virus circulates in the community and mostly causes mild infections because most of the population is immune to severe disease by means of vaccine, previous infection or both."

Either way, Leshem and Tambyah outlined a future where countries have to learn to manage outbreaks without slamming the brakes on their economies.

"The take-home message from this," Leshem said, "is that when the delta variant is introduced into a population, there will be an increase in cases, even despite high [vaccine] coverage rates."

When that happens, he added, a combination of vaccines, strengthening immune systems, credible government communications and personal responsibility among the public can "help nations function relatively normally despite COVID."

Tambyah said, "We should concentrate on protecting the vulnerable, monitoring for large clusters, ramping up vaccinations, keeping the health care system going and maintaining the physical, mental and social well-being of the people."