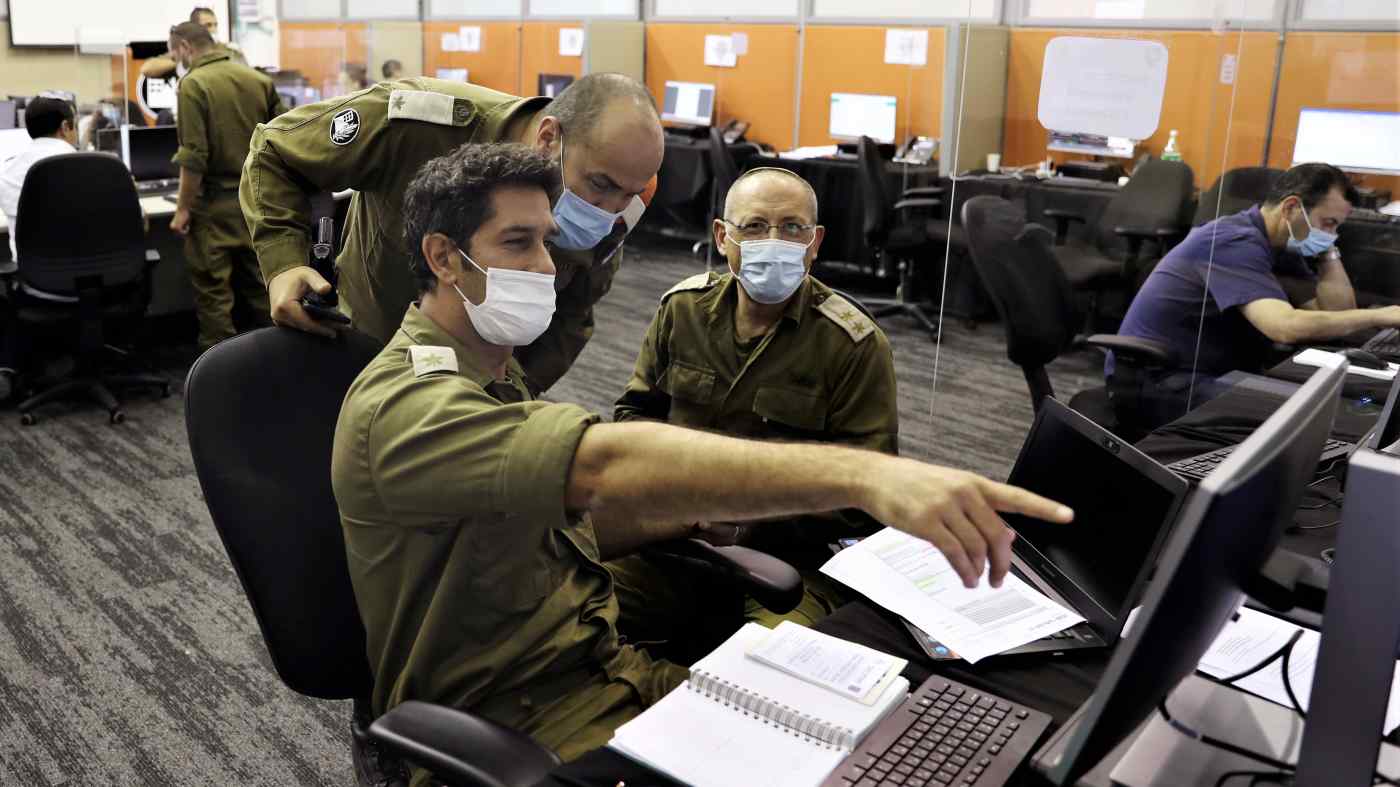 TOKYO -- The world is watching Israel and its unmatched coronavirus vaccination drive. Israel, meanwhile, is watching COVID-19 around the world with a "Knowledge Center" spearheaded by military intelligence.

Much has been made of the tiny Middle Eastern state's rapid vaccine rollout. It has administered nearly 66 shots per 100 residents, according to the latest figures from statistics website Our World in Data. That was far ahead of the best of the West, the U.K.'s nearly 19, let alone Asia, where Singapore was leading at about three.

Israeli Prime Minister Benjamin Netanyahu last week reported that confirmed cases in the 60-plus age group had dropped 45% thanks to inoculations. But if the up-for-reelection Netanyahu has made himself a prominent face of the campaign -- touting 17 rounds of talks with Pfizer's CEO and being the first to get jabbed -- the military has provided crucial support.

When COVID-19 first reached the country almost exactly a year ago, the government sought to trace and quarantine people who had been in contact with patients. As it quickly became clear that the Ministry of Health lacked the resources to confront the crisis alone, the authorities turned to the Israel Defense Forces.

A military spokesman told Nikkei Asia that IDF contact tracers have conducted roughly 240,000 epidemiological investigations, while Home Front Command facilities have accounted for about 50% of all COVID testing. He said the military also dispatched personnel to reinforce hospitals and laboratories while providing 29 quarantine locations.

Another endeavor was to create a Coronavirus National Information and Knowledge Center, led by the IDF Intelligence Directorate. The basic idea was to soak up all kinds of information on the virus and vaccines -- from the ministry itself, from health care providers and from research published across the globe -- to help the government make better decisions. Policymakers receive daily reports from the center.

"We brought people from different disciplines -- the intelligence people, from the military, many people from academia, to sit together and to try to assess properly all different aspects which are relevant for us," Dr. Asher Salmon, head of the Health Ministry's international relations department, told Nikkei.

Asher declined to disclose the scale of the center but explained it "does many things," from conducting risk analysis to formulating mathematical models. "We need somehow to understand, are we going to have a massive outbreak in the coming weeks? Where is it going? How will it respond to different measures?" It has not always worked. Initially a success story, Israel later struggled to contain outbreaks and resorted to multiple lockdowns, while the virus surged through some communities that defied social distancing guidelines. The nation of about 9 million has recorded over 700,000 infections and more than 5,000 deaths. It continues to see thousands of daily cases, though the curve is trending downward.

"I have to tell you that after being in this [coronavirus] business for a year, it's not very easy," Asher said. "Not every assessment or analysis has proven itself. But [the Knowledge Center] is certainly a tool that helps everybody, from the prime minister and the cabinet down to us, to really try and plan properly."

The operation extends to monitoring progress on vaccines.

Within Israel, the center tracks the number of people inoculated, how the doses are distributed across demographics, reports of side effects, and where more educational support might be needed to persuade residents to go and get the shots. It also watches how vaccines are working outside the country and how mutations might affect them.

In late January, the Knowledge Center warned of the danger of an Israeli variant emerging. "The mass vaccine campaign taking place parallel to the active outbreak in Israel may lead to 'evolutionary pressure' on the virus," it said in a report quoted by The Times of Israel news site.

The IDF spokesman said the Home Front Command and the military's Unit 8200 -- an intelligence organ known for its cyber capabilities -- have "teamed up" on a task force focused on variants. "The contacts of each person confirmed to be infected with one of the variants will be thoroughly investigated using a combination of specially trained investigators and an algorithm to trace contacts two 'generations' back," he said. 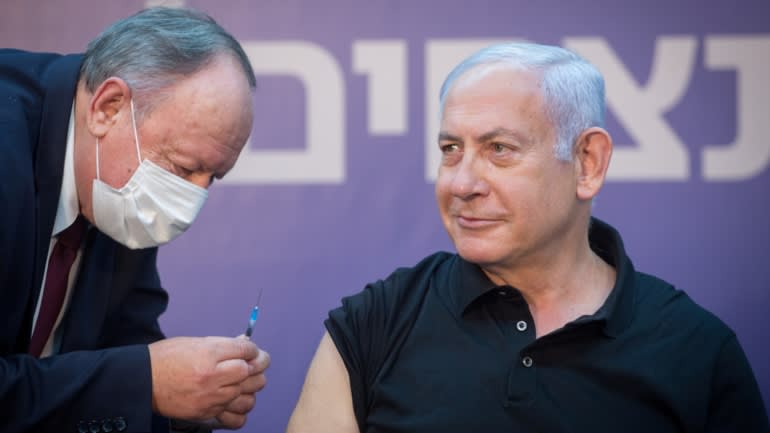 Asher stressed: "We are doing whatever we can to limit [variants], to contain them. Because there is conflicting data regarding the effectiveness of the current vaccines against these variants."

The IDF, meanwhile, is offering on-the-ground assistance to get vaccines out as quickly as possible. The government recruited about 700 reserve medics to help with mass inoculations.

"Those reserve medics have been deployed to 104 vaccination centers across Israel," where they assist with shots and logistics, the spokesman said. He added that the IDF helps arrange vaccinations for people with mobility issues, who cannot reach an inoculation site.

IDF involvement in a time of crisis is nothing unusual in Israel -- a country that has fought multiple conflicts dating back to its foundation in 1948. Although Israel is not in a state of war today, it is constantly on guard and faces rising tensions with Iran.

Legally, all citizens are required to serve after turning 18, with exceptions for Arabs and ultra-Orthodox Jews. This makes the IDF part of the community in a way that, say, Japan's Self-Defense Forces are not. The SDF has dispatched small numbers of nurses to help certain prefectures cope with COVID-19, but even its disaster relief operations are tightly controlled by pacifist laws. An IDF medic consults with a man getting vaccinated in Tzrifin, in central Israel. (Photo courtesy of IDF)

Although the IDF is aiding the coronavirus fight, Asher emphasized that it is only part of the story.

"It looks very interesting, exciting, sexy, but in the end, it's just people with proper knowledge assessing [the situation] and really trying to predict what is unpredictable," he said, pointing to the mathematicians, computer experts and businesses also on the case.

Asher said this cross-sector approach should be remembered for the next pandemic, whenever it strikes.

"What I try to tell my colleagues is, it's not the business of the Ministry of Health or the health system. It's a national business," he said. "The consequences of this crisis are national and are relevant to almost every discipline in the country. So we have to work together and use the strong sides of every organization."

Another lesson, he said, is the importance of restricting movement of people within and across borders. "It's the best way to stop it. Certainly China is still successful by massively limiting people. And I do believe if that had been done from the beginning, we may be in a whole different place now."

With reporting by James Hand-Cukierman.