CAIRO/WASHINGTON/TOKYO -- As most of Asia and the world anxiously await COVID-19 vaccines, Danny Hakim is in high spirits after receiving his second Pfizer-BioNTech shot in Israel last week.

"They say with the second vaccine you usually get a headache and a fever. I didn't," said the 61-year-old philanthropist and peace advocate.

Hakim described a festive atmosphere at the seniors residence his wife runs, where he was invited to come and get his doses. "It was a real party" with balloons, music and free coffee. "They had everything. It was fantastic."

In the span of a year, Israel has gone from pandemic success story to multiple lockdowns to object of global envy as it races ahead with inoculations. What has been described as a "miracle" by some in the press is in fact a result of a strong public health system, comprehensive data, financial resources and, perhaps, an extra dose of political motivation as the virus continues to spread.

Since Prime Minister Benjamin Netanyahu received the nation's first jab on live TV on Dec. 19 -- "One small injection for a man and one giant leap for the health of us all," he said -- the ratio of doses administered per 100 people has surpassed 29, according to the statistics website Our World in Data. At the same time, Israel is not the only country with a brisk rollout. The United Arab Emirates and Bahrain rank second and third in terms of shots per 100 people. The U.K., after struggling to contain the pandemic, is fourth.

But the gap between Israel and Asia is stark: Numerous countries are only just ramping up while some, such as Japan and Malaysia, are not expected to even start vaccinations until sometime in February. Netanyahu, meanwhile, has stressed that all Israel residents over 16 should be fully vaccinated by the end of March.

Israeli health workers and individuals over 60 have had first dibs, and local media reports on Sunday said over 250,000 people had received their second doses. The Pfizer vaccine is expected to be 95% effective at preventing COVID-19 about a week after the second shot.

"To me, the most critical factor is the fact that in Israel, health care is completely socialized and government-funded," professor Eyal Leshem, specialist in infectious diseases at Sheba Medical Center in Tel HaShomer, told Nikkei Asia.

Every resident is enrolled in one of four health maintenance organizations, or HMOs. These are government-funded, not-for-profit organizations that nevertheless compete to provide the same care services.

What this means in practice is that each HMO "has a full electronic medical record and can easily identify people for vaccine prioritization, contact them and bring them in to vaccinate them," Leshem explained. "So the logistics of the vaccine, which was a blockage for other countries like the U.S. or Germany, is very easy in Israel." Danny Hakim poses with a COVID vaccine vial and a Magen David Adom worker upon receiving his second shot on Jan. 14. (Photo courtesy of Danny Hakim)

The HMOs reach out to eligible individuals by text messages and phone calls. Vaccination appointments can be made online. And there is an emphasis on flexibility: While certain population segments are first in line, officials strive to avoid the waste seen in some parts of the U.S., where there are reports of doses being discarded due to a lack of patients fitting eligibility criteria.

"I could get a text message at 4 p.m. from my health care fund, saying, 'Listen, if you want a vaccine, go ahead and visit your community health center or a health center in another city,'" Leshem said.

"Normally you think ambulances are for accidents. But here they've used their quite formidable manpower to get the vaccinations out," Hakim said. "In the elderly home, [the vaccination staff] were all from Magen David Adom. So it's not always in health clinics. Sometimes they're outside in tents. They're all over the place."

None of this would matter without enough doses. Netanyahu has chased vaccines as if his political life depended on it -- and it just might. Dogged by allegations of corruption and an inability to form a stable coalition, he faces his fourth election since 2019 in March.

"He thinks he's saving the nation and [the vaccinations] will help him get in again," Hakim said. 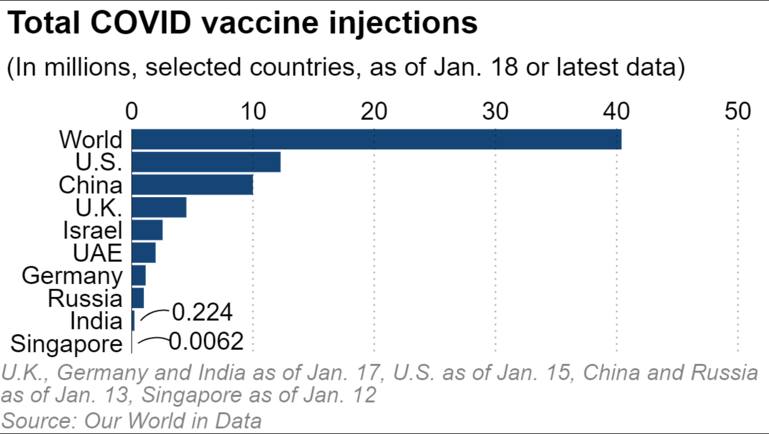 The prime minister has boasted of having 17 conversations with Pfizer's CEO. And media reports say Israel agreed to pay a significant premium, though the details remain under wraps.

Duke University's global vaccine tracker shows that as of early January Israel had secured at least 8 million doses from Pfizer, 6 million from Moderna, 4 million from Arcturus Therapeutics and an unknown quantity from AstraZeneca.

"We don't really know what happened in terms of payment," Leshem said. "But even if the Israeli government paid more per dose, I think it could be argued that this was a smart investment."

The Ministry of Health did disclose an agreement to provide Pfizer extensive weekly status reports, making the country something of a global guinea pig. A partially redacted contract released on Sunday shows this includes non-identifiable data on COVID cases and hospitalizations as well as "numbers of vaccinees, as total and by age and other demographic subgroups."

Netanyahu needs this to work. Israel is now in its third nationwide lockdown and roughly 9,000 new infections are reported each day. Over 552,000 have caught COVID-19 so far, with just over 4,000 deaths. Critics pin much of the blame on the premier for failing to clamp down on ultra-Orthodox Jewish communities -- an important support base -- that defied social distancing rules.

Despite the continued spread, Leshem was optimistic that early February would mark a turning point for severe cases, as vaccines kick in.

Netanyahu is not the only world leader hoping to inoculate his way out of trouble. Japanese Prime Minister Yoshihide Suga has seen his approval figures drop as cases rise just months before the Tokyo Olympics, and has appointed a new minister to lead the vaccine rollout. Malaysian Prime Minister Muhyiddin Yassin this month declared a parliament-suspending state of emergency -- a move prompted by soaring infections but that also staves off a leadership challenge.

Countries that have already started vaccinations aim to pick up the pace.

India and Indonesia have begun the daunting tasks of immunizing their large populations. Singapore -- arguably comparable to Israel as a small country with strong health care and financial muscle -- last week opened its first two coronavirus vaccination centers. Total inoculations stood at only 6,200, but the Health Ministry said the numbers "are expected to rise substantially in the coming weeks as we continue to ramp up our vaccination operations." 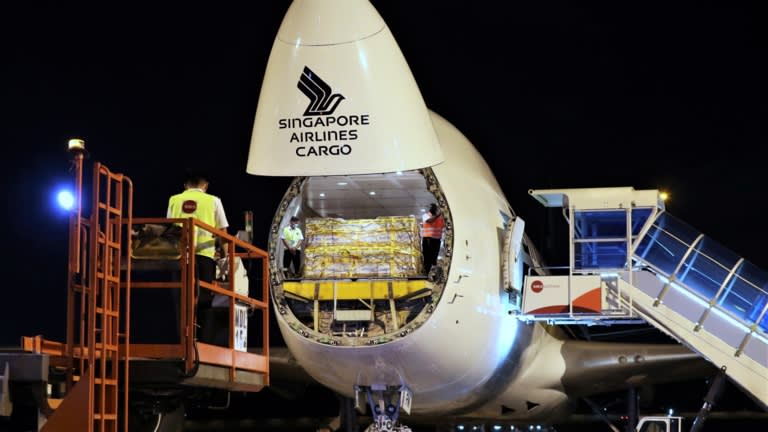 Across the Pacific, President-elect Joe Biden is aiming for 100 million inoculations in his first 100 days. The U.S. was quick to authorize vaccines but stumbled in distribution. This was partly due to the time-consuming process of selecting people for prioritized injections. Still, by sheer total shots, the U.S. was leading the world at 12.28 million as of last Friday.

For most countries, simply copying the Israeli model is not an option.

Israel's fast pace is "unlikely to be replicable across much of the world," especially in the short term, Oxford Economics said in a note dated Monday. "The rapid rollout partly reflects ample access to the Pfizer vaccine in exchange for information," wrote Ben May, director of global macro research.

Still, he added, Israel "will provide the rest of the world with a potential roadmap for the future and a guide to the speed and extent to which normality can be resumed once a significant share of the population has been inoculated." Israel reportedly plans to introduce "green passports" for people who are fully vaccinated, allowing freedom from safety rules.

Leshem offered a way bigger countries in Asia and elsewhere might draw on the tiny Middle Eastern state's experience.

"When you look at a large problem, you have to dismantle it into smaller solvable problems," Leshem said. "Very large nations probably need to divide their countries into smaller manageable units -- perhaps Israel-type units of about 10 million -- and manage them locally."