Prime Minister Yoshihide Suga said he had not been involved in detailed discussions on the controversial proposals before they were unveiled.   © Kyodo
Nikkei staff writersJuly 15, 2021 02:10 JST | Japan
CopyCopied

TOKYO -- Japanese Prime Minister Yoshihide Suga on Wednesday apologized for a proposal by his coronavirus point man to put pressure on restaurants that reject pandemic-linked limits on alcohol sales.

"We regret the trouble we have caused to so many people," Suga said after his government backtracked on a plan to cut off such establishments from alcohol distributors. "I would like to add my own apology."

The prime minister's comments to reporters marked his government's latest attempt to undo cabinet member Yasutoshi Nishimura's much criticized announcement on July 8 to involve financial institutions in leaning on bar and restaurant operators weary of nonbinding restrictions on serving alcohol at night.

Nishimura, the minister for economic and fiscal policy, said information on establishments not complying with the request would be shared with banks. The liquor rule is tied to cash payments meant to help businesses through the coronavirus crisis.

Nishimura's announcement came on the night the government decided to announce a fourth coronavirus state of emergency in the Tokyo area, lasting until beyond the Summer Olympics. Three earlier emergency declarations sparked resistance among the bars, clubs and eateries that make up the Japanese capital's neon nightlife. 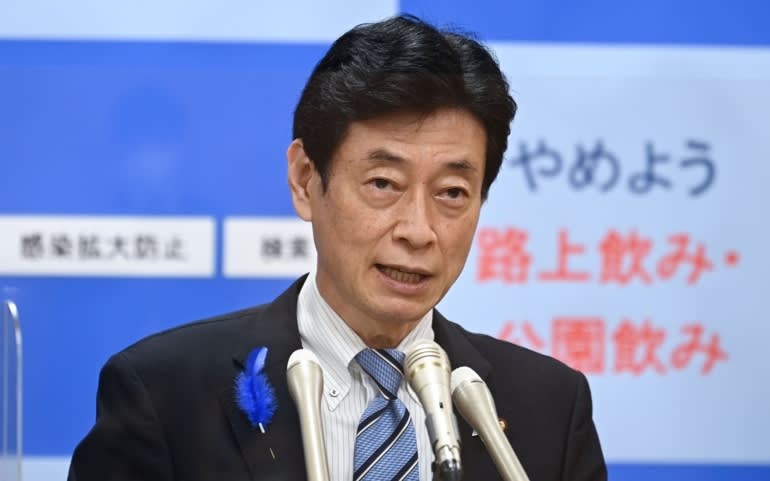 Yasutoshi Nishimura, the Japanese government's coronavirus pointman, has come under fire for plans to involve lenders in pressuring bars and restaurants that continue to serve alcohol at night. (Photo by Kento Awashima)

The proposal encountered resistance from banks uncomfortable with the idea of playing an enforcement role, as well as from ruling and opposition party lawmakers.

Asked who was to blame for the mixed messages, Suga said: "We are all going to make sure we handle things the right way."

Critics of the plan to involve lenders in the unpopular liquor ban came from within Suga's own Liberal Democratic Party.

"This tops the list of bad moves that you must not do," lower house member Masanobu Ogura said.