TOKYO -- Japan and other Asian countries are adding to the cascade of global restrictions on travel from the U.K., amid fears of a new coronavirus variant believed to be more transmissible than strains seen so far.

Katsunobu Kato, the Japanese chief cabinet secretary, on Wednesday morning announced a temporary ban on foreign visitors arriving from the U.K., starting Thursday. Singapore, the Philippines and South Korea have all announced their own fresh travel curbs since Tuesday, following measures by India and Hong Kong on Monday.

Kato said only Japanese citizens coming back from Britain, as well as foreign nationals with valid residence permits, will be allowed to enter the country "for the time being." They will be asked to stay in quarantine for 14 days -- a rule that had been relaxed in November for travelers returning from short business trips.

This contradicted earlier reports that suggested even foreign residents might be temporarily locked out. However, newcomers to Japan will have to wait outside the country: "Until further notice people from the U.K. will not be allowed to move to Japan to start a new job," the British Embassy in Tokyo tweeted on Wednesday. Britain's travel advisory says the curbs apply to "foreign nationals in possession of visas issued since 1 October under the previous Global Residence Track."

From Sunday onward, citizens and residents returning to Japan will be allowed to isolate at home only if they can submit proof of a negative COVID-19 test issued no more than 72 hours before departure. Otherwise, they will have to stay at a designated quarantine facility.

Governments are taking no chances with the new strain, despite questions over whether there is actual cause for alarm. The World Health Organization has stressed that it has seen no evidence the variant is more deadly or makes people sicker, cautioning against panic. British Prime Minister Boris Johnson has said it appears to be up to 70% more transmittable.

The Philippines, for its part, will temporarily ban all flights from the U.K. from Thursday until at least Dec. 31.

All travelers who have been in the U.K. within 14 days of their arrival in the Philippines -- including those merely transiting -- are likewise temporarily restricted from entering the country during the same period, Manila's COVID-19 task force said. Anyone who fits this criteria but arrives before Thursday will be required to undergo stricter testing and isolation protocols, including a mandatory 14 days in quarantine notwithstanding a negative test.

Philippine Airlines, the country's flag carrier, later announced it was halting its once-a-week service connecting Manila and London from Christmas Eve until the end of February 2021. The airline said the suspension was "in the best interest of all."

Joining the clampdown, a South Korean health official on Wednesday morning announced that flights from the U.K. would be suspended until the end of the year.

And Singapore's Ministry of Health on Tuesday said it was temporarily banning all long-term work pass holders and short-term visitors with travel histories to the U.K. in the past two weeks. This takes effect on Wednesday at 11:59 p.m.

As for returning Singaporeans and permanent residents, they will have to be tested on arrival, before 14 days in quarantine.

Singapore's Health Ministry said in its statement: "While the strain has been suggested to be more transmissible, there is currently insufficient evidence to determine if this strain is associated with any change in disease severity, antibody response or vaccine efficacy. These aspects are being investigated by the U.K. authorities. The Ministry of Health will evaluate the data as it emerges and review our border measures accordingly."

Taiwan has held off on imposing a ban but said on Tuesday that it would reduce passenger flights between Taipei and London by half starting Wednesday. It also said that all passengers coming from the U.K. or anyone who has been in Britain over the past 14 days would be placed in centralized quarantine.

European countries were quick to cut off Britain after the U.K. government admitted over the weekend that the coronavirus variant was out of control in some parts of the country.

Hong Kong followed on Monday by announcing it would ban anyone who had spent time in the U.K. in the past two weeks from boarding a flight to the city, while India said it would suspend flights from the U.K. until Dec. 31. Several Middle Eastern countries -- Saudi Arabia, Israel, Kuwait and Oman -- have announced flight and border crossing suspensions affecting travel from the U.K., ranging from a week to 11 days. 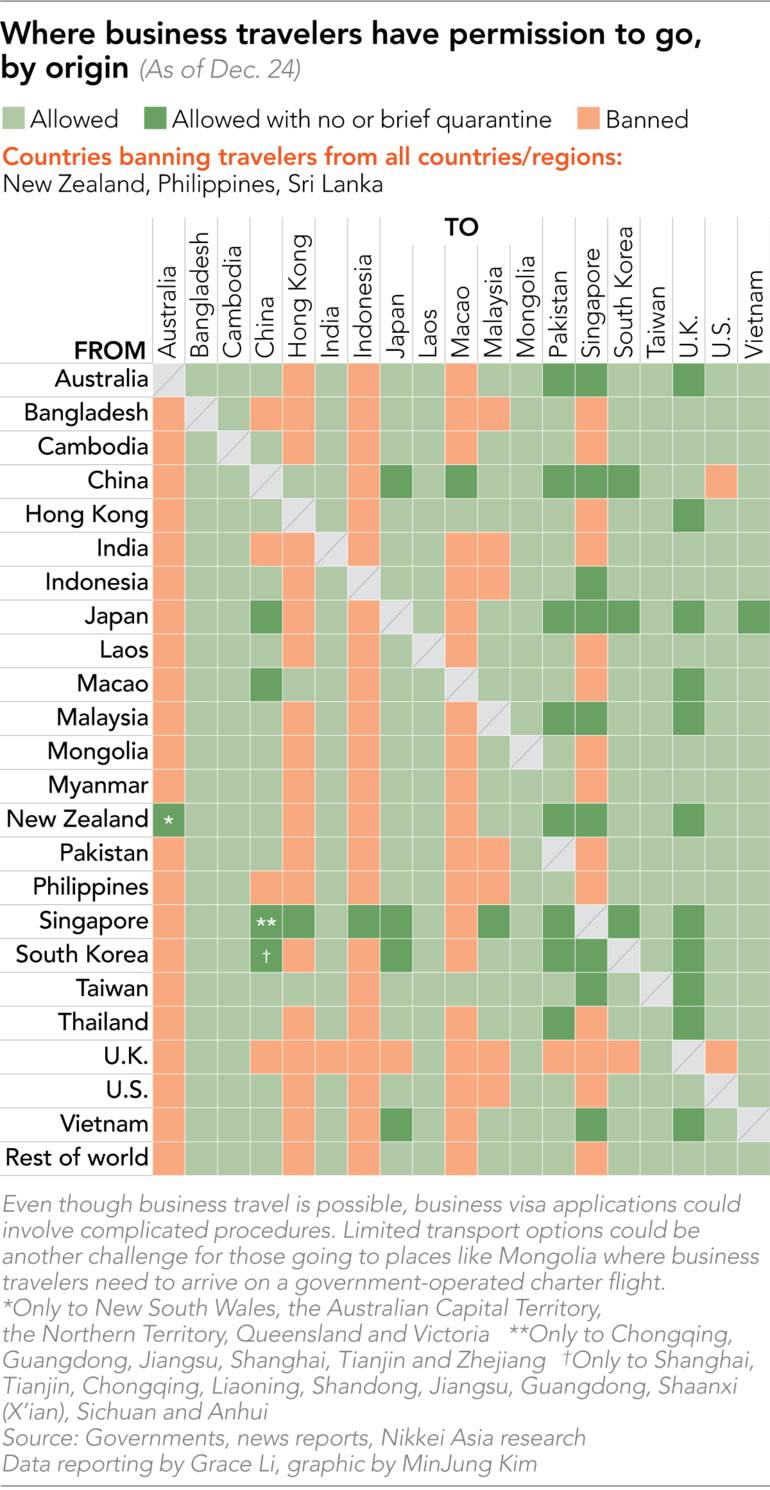