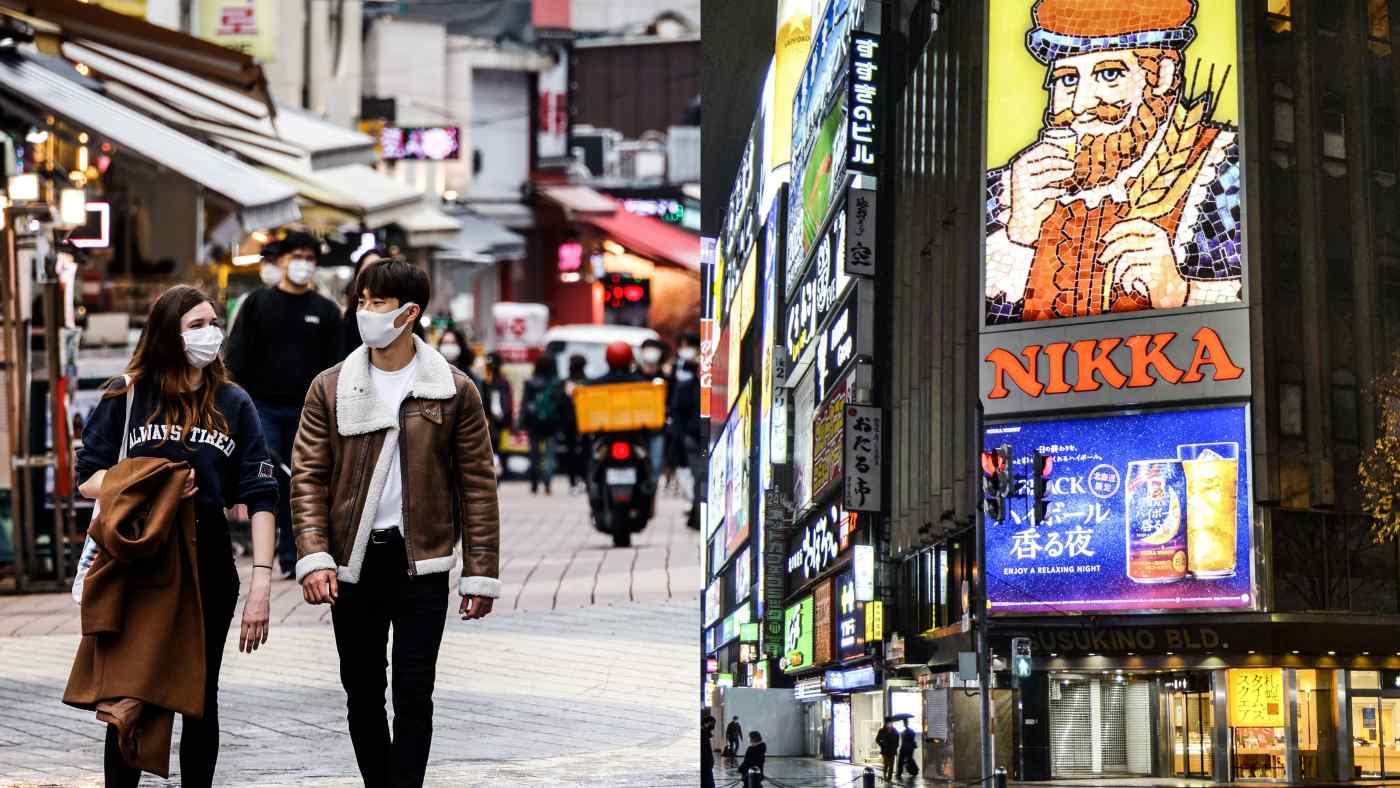 A couple walks down a street in Seoul, left, and bright lights in Sapporo's Susukino district show that the nightlife magnet is still in business. (Source photos by Kyodo and Reuters)
MITSURU OBE and KIM JAEWON, Nikkei staff writersNovember 20, 2020 16:54 JST | Japan
CopyCopied

TOKYO/SEOUL -- Coronavirus infections have surged to a record high in Japan this month with the arrival of the flu season. Cases are also on the rise in neighboring South Korea.

The increase comes as countries have shifted focus to reviving their economies.

Is Japan in for an explosive surge in infections like Europe and the U.S.? Here are five things to know:

Japan has seen a spike in the number of new infections this month, hitting 2,371 on Thursday and an almost fourfold increase on the month.

South Korea reported 363 cases on Friday, marking a new three-month high, though it is well below the February peak of 813. Health authorities warned that the world is facing a crisis that shows no signs of abating. They added that South Korea is not exempt from the problems.

Infections are also rising in other Asia-Pacific countries. China reported 17 new cases for Thursday, up from 12 a day earlier. India reported 45,576 on Thursday in the last 24 hours -- up from 38,617 the previous day and bringing the country total to 8.96 million. On Wednesday, South Australia Premier Steven Marshall announced a six-day lockdown to stamp out an outbreak.

Why the upsurge in infections?

So-called lockdown fatigue is a key factor. After nine months of social distancing, people are itching for social interaction, despite government warnings.

Take Hokkaido, Japan's northernmost prefecture. Its capital, Sapporo, has a vibrant nightlife with many pubs, nightclubs and other attractions, all of which have started to come alive again after initial lockdowns. The city's entertainment district, along with the area's seafood and scenery, are huge tourist draws.

The ubiquitous hostess clubs in the district, whose clients mainly comprise men in their 20s and 30s, have seen an uptick in business. Since masks tend to get in the way of face-to-face business, they are usually not worn. Hence, clusters can appear after unmasked clients return home, unwittingly spreading a nightlife-contracted virus to family members and office colleagues.

Authorities are asking that bars and restaurants keep doors and windows open or properly ventilate their premises. But clubs stay open until late into the night when temperatures drop, making this unfeasible.

"The coronavirus is more difficult to deal with than influenza because some people stay asymptomatic. They spread the virus without people around them noticing it," said Kazuhiro Tateda, Toho University professor and chairman of the Japanese Association for Infectious Diseases.

Cold winters also play a part. Researchers have found that the coronavirus remains active for longer at cooler temperatures, increasing the risk of people breathing in droplets or touching infected surfaces. People also tend to stay indoors, where air is not well ventilated. Air also tends to be dry in winter, drying out the mucous membranes of the body's airways -- the first line of defense against the virus -- making people more susceptible to infection.

China, despite being in the same climate zone as Japan and South Korea, has avoided a major outbreak since February, as stringent controls are in place to quickly stamp out infections: When an outbreak occurs, the area goes into lockdown.

The government, which tracks the movement of citizens, will isolate anyone who may have come into contact with infected people. Quarantine is strictly enforced so there is far less chance of infected people spreading the virus.

How is the health care system coping?

Young people are unlikely to develop a serious illness from the coronavirus, but it can be deadly to older people. In Hokkaido, people in their 30s or younger made up 70% of the infections in October. The share dropped to less than 50% in November, as the virus attacked older generations.

Across Japan, there were 251 seriously ill patients as of Nov. 15, less than 328 during the April peak. The health ministry says that about 50,000 beds are available for coronavirus patients and that the occupancy rate stands at only 25%.

But there are questions about these numbers, says Tateda, the infectious disease expert. He wonders how many beds are actually ready for virus patients and whether there are enough medical workers and equipment to handle a huge influx.

In Hokkaido, some regions are already having difficulty accommodating patients because of surging infections. The hospitals are much more strained than the statistics indicate, a Hokkaido government official said. "One seriously ill patient and the workload increases dramatically for the hospital staff," the official says.

What is the outlook?

Experts warn that medical facilities could be overwhelmed unless people start changing their behavior, including paying closer attention to social distancing guidelines.

The situation may be even worse as virus cases are outpacing Google's forecast.

How is Japan responding?

Prime Minister Yoshihide Suga on Thursday called for the public to wear masks when dining and meeting others. What he meant was to keep voices low during meals, take off masks only when eating, and put them on when conversing.

The new campaign forms part of his effort to avoid any business restrictions for fear they will damage the economy. He is determined to keep business as usual in spite of the virus upsurge. There will be no stay-at-home requests or shutdown of bars and restaurants.

The Suga government intends to continue its "Go To" subsidy campaign for domestic travel, even as medical professionals voice concern that it could add to the country's virus woes, especially through asymptomatic carriers.

That means it is up to the public to follow Japan's loose social distancing rules.

In South Korea, rules are more strictly enforced. People can be fined 100,000 won ($90) for not wearing a mask on public transportation or in public spaces. Masks are mandatory even on streets in some municipalities. Infected people must also self-quarantine or face arrest.

There are already cases where people have been sentenced to months in jail for violations.

In Japan, there is also a growing call for more stringent rules. If cases continue to increase at the current rates in Tokyo and Osaka, "cluster measures and efforts by the people alone will not be enough to control [the virus]," said Shigeru Omi, head of Japan's panel of experts.