Japan and US make plans to evacuate citizens from Wuhan TOKYO/HONG KONG/SHANGHAI -- Tokyo and Washington are making plans to evacuate Japanese and American citizens from Wuhan, the epicenter of the novel coronavirus outbreak that has claimed more than 50 lives, while Honda Motor said Sunday it was evacuating about 30 employees and family members out of the area back to Japan.

Japan's Prime Minister Shinzo Abe said on Sunday that after his government finishes talks with Chinese authorities, it will bring back "all [Japanese citizens] that wish to return, and is looking at all possible means, such as chartered flights."

Abe said that the government has been asking Japanese residents in Wuhan if they want to leave the city. Some 430 Japanese nationals had been confirmed to reside in or near Wuhan, according to Foreign Minister Toshimitsu Motegi.

Honda said that it will have roughly 30 personnel, including Japanese expatriates and their families, fly from Wuhan to Japan on a charter flight arranged by the government. A few employees are expected to stay in Wuhan, where the automaker has three factories.

Motegi spoke with Chinese counterpart Wang Yi over the phone on Sunday evening to ask for China's cooperation in bringing Japanese citizens back home. Wang expressed understanding of Japan's position. Motegi also promised Japan's full support to prevent the infection from spreading. Wang said that China will work to provide information to the international community. 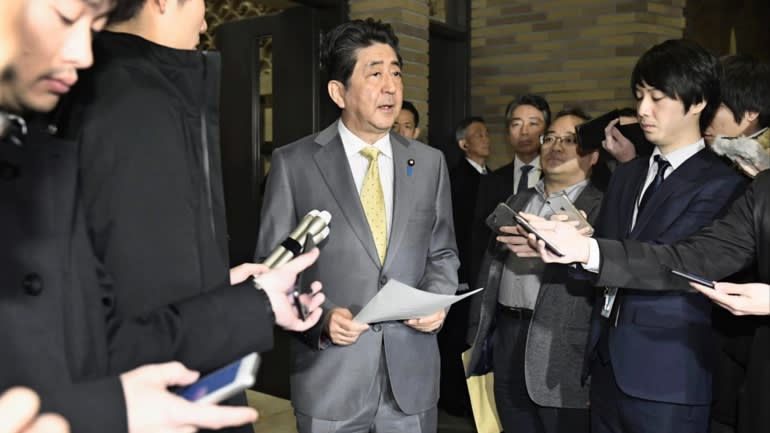 Shinzo Abe spoke to reporters at the official prime minister's residence about the Wuhan virus on Jan. 26.   © Kyodo

The government is also considering evacuation by road from Hubei Province, and have Japanese nationals take flights home from other places, according to sources.

The Chinese government said on Sunday the death toll in the country from the coronavirus rose to 56 from 41 a day earlier, with 1,975 cases confirmed. Thailand, Japan, South Korea, Vietnam, the U.S., France, Taiwan, Hong Kong, Macao, Singapore, Australia, Nepal and Malaysia have all reported cases.

The U.S. Embassy in China on Sunday posted a statement on its website confirming an evacuation plan for diplomats and U.S. citizens in Wuhan. The State Department "is making arrangements to relocate its personnel stationed at the U.S. Consulate General in Wuhan to the United States."

An evacuation flight from Wuhan Tianhe International Airport to San Francisco will depart on Tuesday.

The statement said the flight was limited to private U.S. citizens, and that "if there is insufficient ability to transport everyone who expresses interest, priority will be given to individuals at greater risk from coronavirus."

Hua Chunying, a spokesperson for China's foreign ministry, issued a statement on the U.S. evacuation plan that said Beijing will offer cooperation in compliance with its rules regarding the preventive measures on diseases.

Hong Kong Disneyland on Sunday announced it would temporarily close its popular theme park due to the spreading coronavirus that originated in Wuhan, China.

The resort said on its website that it made the decision "out of consideration for the health and safety of our guests and cast members."

"We are in close contact with health authorities and the government," the park said, adding that it will reopen once authorities "determine it is advisable." Hotels at the Disneyland resort will remain open. Chinese media reported that a 2-year-old in Guangxi, an autonomous region that borders Vietnam, and a 9-year-old in the central province of Shaanxi have been infected with the virus. Until now, the virus had been seen as more contagious among older people.

Canada on Saturday declared its first "presumptive" confirmed case of the virus. Local media said the patient is a man in his 50s who returned to Canada from a trip to Wuhan on Wednesday. He is reported to be in stable condition.