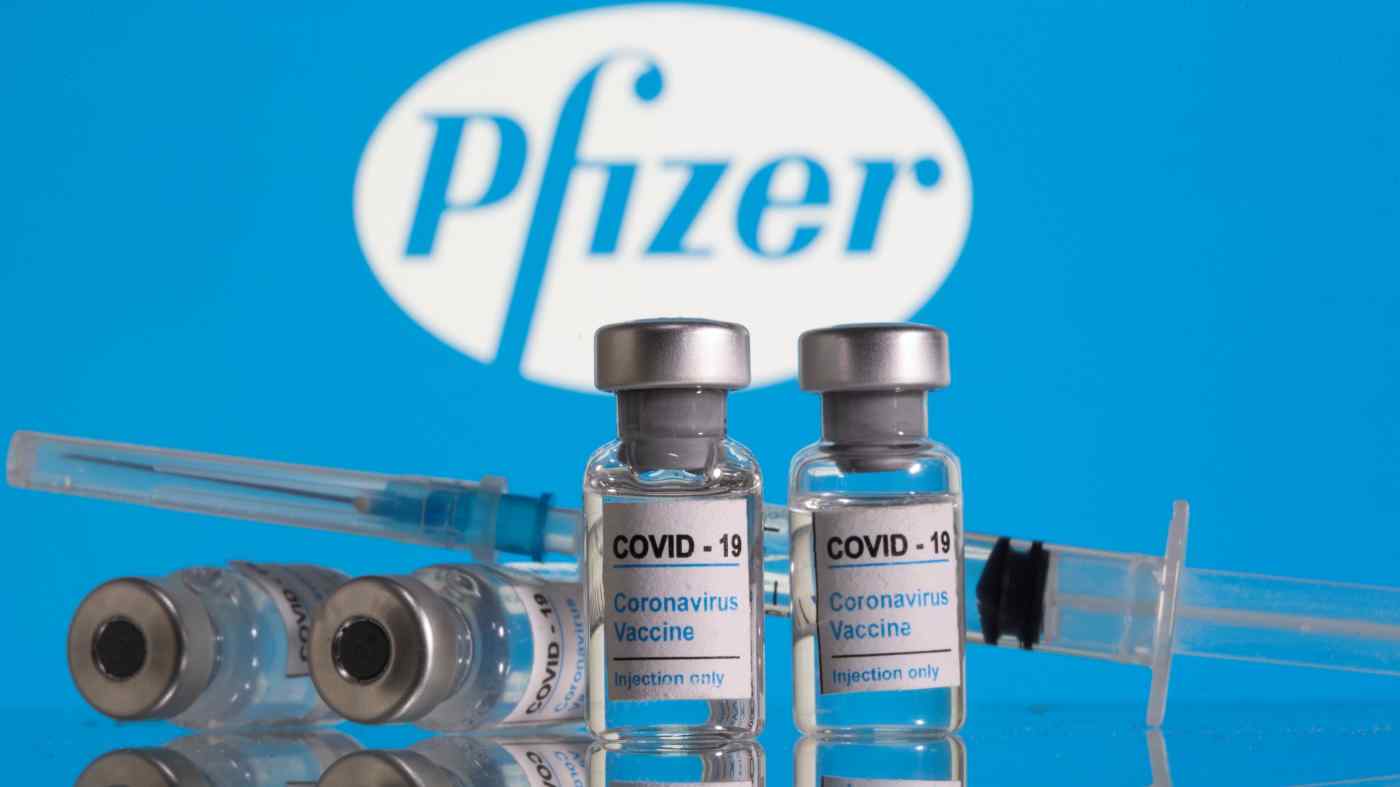 Vaccinations are expected to start Wednesday at a medical facility in Tokyo before expanding elsewhere.   © Reuters
February 14, 2021 17:47 JSTUpdated on February 14, 2021 20:45 JST | Japan
CopyCopied

TOKYO (Kyodo) -- Japan formally approved Pfizer Inc.'s coronavirus vaccine on Sunday, the first greenlit for domestic use, clearing the way for the nation to start inoculating health workers in a matter of days.

The fast-track approval by the Ministry of Health, Labor and Welfare was a major step forward in the country's efforts to bring the pandemic under control.

It came amid widespread dissatisfaction with Prime Minister Yoshihide Suga's response to the public health crisis and with less than six months until the Tokyo Olympics and Paralympics.

U.S. pharmaceutical giant Pfizer and its German partner BioNTech SE have said data from late-stage clinical trials showed the vaccine to be 95 percent effective at preventing symptoms of COVID-19.

Japan received a shipment of around 400,000 doses from Pfizer's factory in Belgium on Friday, the same day a health ministry panel said it had found no issue with approving the vaccine for people aged 16 or older.

First in line to be inoculated are about 20,000 doctors and nurses who have agreed to participate in a study to track potential side effects and the frequency with which they occur. Vaccinations are expected to start Wednesday at a medical facility in Tokyo before expanding elsewhere, with two shots to be administered three weeks apart.

A further 3.7 million front-line health workers are to begin receiving the vaccine in March, followed by 36 million people aged 65 or older from April at the earliest.

People with preexisting conditions such as diabetes or heart disease and those working at elderly care facilities will come next, then, finally, the general population.

One hurdle to rolling out COVID-19 vaccines and achieving herd immunity in Japan is public skepticism. Only 63.1 percent of respondents in a Kyodo News poll conducted this month expressed willingness to get a shot, while 27.4 percent said they were unwilling, apparently out of concern for side effects.

According to the U.S. Centers for Disease Control and Prevention, around 12 million people in the United States have been inoculated with the Pfizer vaccine, with anaphylaxis, or a severe, life-threatening allergic reaction, occurring rarely after vaccination.

Distributing the vaccine nationwide also comes with a number of logistical challenges. It must be stored in ultracold freezers at around minus 75 C, and once taken out kept refrigerated and used within five days.

The government's top spokesman, Chief Cabinet Secretary Katsunobu Kato, said at a press conference Sunday the 400,000 doses Japan received were not affected by widespread blackouts caused by a powerful earthquake that struck the northeastern region the previous night.

The health ministry is asking local governments, tasked with delivering shots, not to transport doses using motorcycles or bicycles, as any impact could affect the effectiveness of the vaccine.

In addition to Pfizer, Japan has agreements in place with AstraZeneca Plc and Moderna Inc. to receive enough doses for its population of 126 million.

Following the European Union's tightening of export controls on vaccines, however, it is uncertain when and in what amounts the country will receive subsequent shipments, a point Taro Kono, minister in charge of Japan's vaccination efforts, has expressed concern over.

Successfully reigning in the coronavirus is crucial for Suga, who is facing criticism for waiting too long to declare a state of emergency in Tokyo and other regions as well as allegations his eldest son wined and dined government officials who were positioned to award a license to the satellite broadcasting company for which he works.

The Kyodo News poll showed the approval rating for Suga's Cabinet stood at 38.8 percent, down from 66.4 percent when he took office in September.

Pfizer applied for fast-track approval of its vaccine in mid-December on the basis it had already been greenlit and administered overseas, including in the United States.

Clinical trials conducted abroad on around 43,000 people showed those who received the vaccine were 95 percent, or twenty times, less likely to get COVID-19 than those in a control group who did not. The drugmaker also tested the vaccine on 160 people in Japan to further test its safety.