Country on verge of surpassing South Korea in infections TOKYO -- Confirmed cases of novel coronavirus infection in Japan surpassed 10,000 on Saturday, just days after a state of emergency was extended nationwide in an attempt to slow the spread of the virus.

Data from Japan's Health Ministry shows a nearly sixfold spike in cases among people in their 50s and younger since the March 20-22 three-day weekend, compared with an increase of 2.7 times among those in their 60s and older. "With infections spreading in unknown ways, we are dealing now with the result of many people letting down their guard during one week in mid-March," said Hitoshi Oshitani, a Tohoku University virologist who sits on a health ministry coronavirus task force, at an online symposium Saturday.

Japan's number of COVID-19 cases is approaching the 10,653 confirmed patients in South Korea, which was once the worst-hit Asia-Pacific country outside of China, data from Johns Hopkins University's Coronavirus Resource Center shows.

Japan had 10,276 as of 9 p.m., a Nikkei compilation shows. South Korea has since been overtaken by India.

Prime Minister Shinzo Abe on Friday once again appealed to the nation to stay indoors, saying a target of an 80% reduction in social contacts had not been reached.

The day before, Abe expanded his declaration of a state of emergency to the entire country from an original seven areas that included Tokyo and Osaka. The move was prompted in part by fears the outbreak could overwhelm medical services in rural areas that are home to many elderly people. 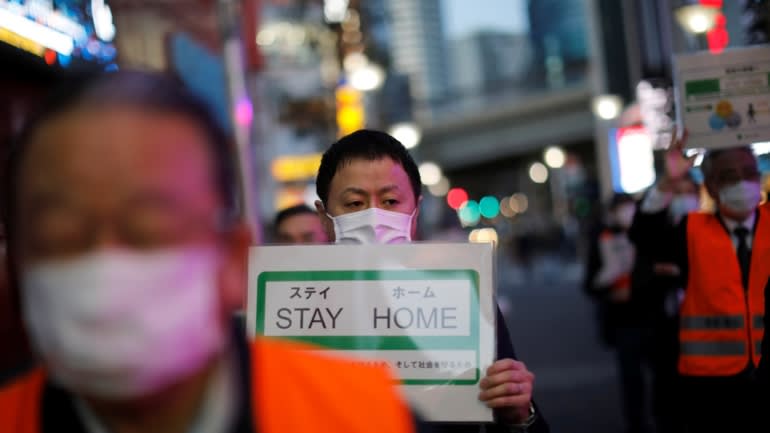 Staff members of the Tokyo metropolitan government call on people to stay home after the Japan's government announced a state of emergency.   © Reuters

Just over 200 people have died of virus-related complications in Japan as of Saturday.

The spread of the virus has gained speed since the March holiday weekend. Japan took two and a half months to top 2,000 confirmed COVID-19 cases on March 31, but needed only another six days to exceed 4,000. Surpassing 6,000 took only four days more.

The time needed for cases to double in Japan has lengthened from as short as six days, which is likely the result of more people staying at home in Tokyo and other large cities. Yet Japan remains on the verge of a sharper rise in infections.

The first wave of COVID-19 cases to hit Japan began in January, spread mainly by people traveling from China. Hokkaido emerged as an early hot spot for cases with no clear path of infection. Authorities' responses during this stage, including Hokkaido's declaration of a state of emergency in February, appeared to limit the rise in new cases.

But after this pause came sharp increases in Tokyo and other cities that have been linked in part to travelers returning from countries other than China.

"Even before the first wave from China had abated, a second wave began, with more than 300 infected people streaming in from Europe, Egypt, the U.S. and elsewhere," Oshitani said.