Japan decides to place Okinawa under COVID-19 state of emergency 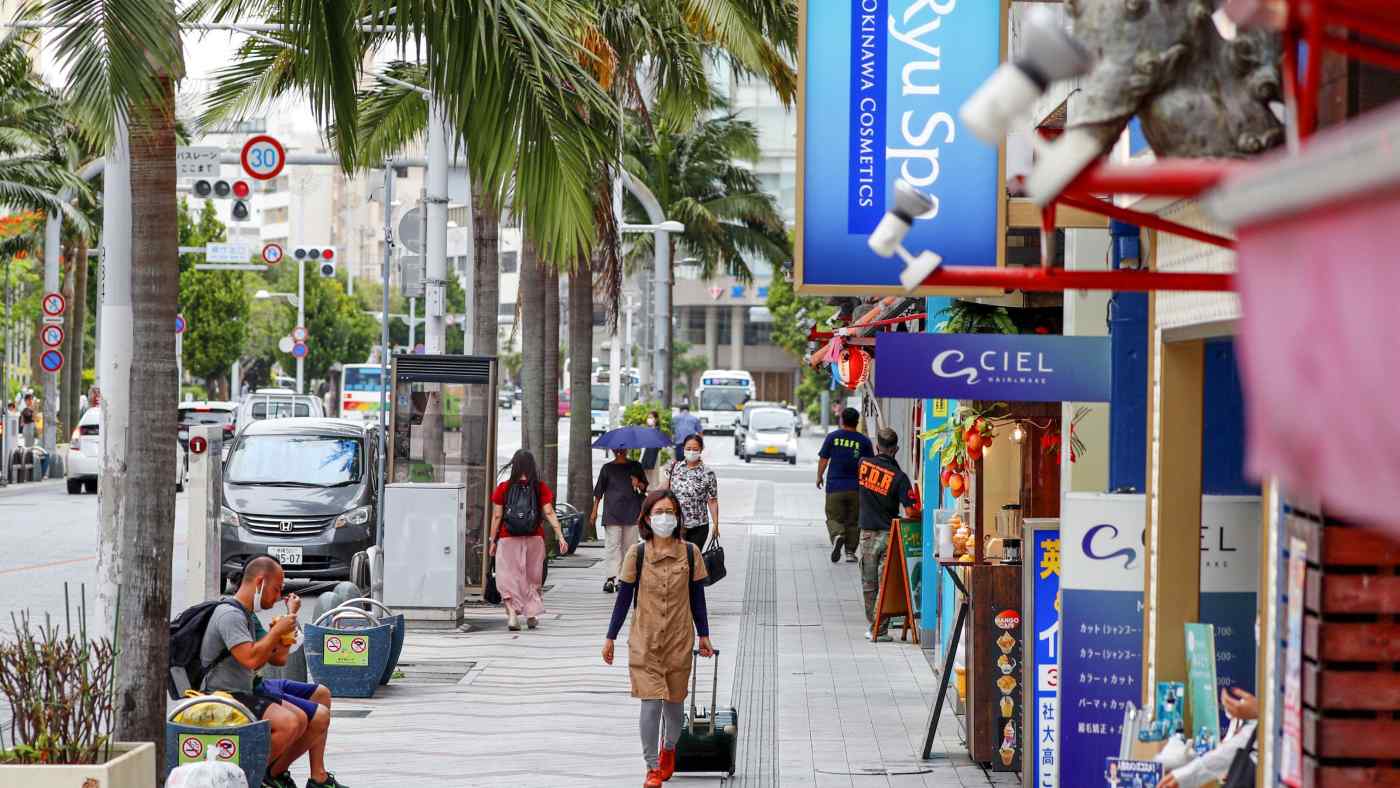 People in masks walk along Kokusai Avenue in Naha, Okinawa Prefecture, on May 21. The government plans to restrict restaurant alcohol sales and discourage tourists to cope with an outbreak of COVID-19.    © Kyodo
May 21, 2021 19:16 JST | Japan
CopyCopied

TOKYO (Kyodo) -- The Japanese government decided Friday to add Okinawa to areas under a COVID-19 state of emergency as infections in the southern island prefecture surge.

Tougher restrictions will be in place from Sunday to June 20, with Yasutoshi Nishimura, the minister in charge of the coronavirus response, calling for strong measures including banning restaurants from serving alcohol and asking tourists not to visit Okinawa during this period.

Okinawa's addition will bring the number of prefectures under the state of emergency to 10. Prime Minister Yoshihide Suga formalized the decision at a task force meeting after getting a nod from an expert panel.

The move comes after Okinawa Gov. Denny Tamaki on Wednesday asked for his prefecture, a popular tourist destination for its warm climate and beaches, to be added as the rising number of infections strains the local medical system.

Okinawa, which has a population of around 1.5 million, reported another 207 coronavirus cases on Friday, a daily record for the prefecture, and one death attributed to COVID-19.

Japan's fourth wave of infections appears to have passed its peak, though hotspots such as Okinawa as well as a slow vaccine rollout continue to be sources of concern with just two months until the Tokyo Olympics.

Nishimura warned the infection situation has yet to significantly improve and called for "maximum vigilance" in stopping the spread of the highly contagious Indian variant of the virus.

Suga has already declared a state of emergency in nine prefectures including Tokyo and Osaka through May 31, with eateries told to close by 8 p.m. and to refrain from serving alcohol or offering karaoke services.

Department stores and other major commercial facilities are also being told to temporarily shut or close early, and attendance at concerts and sports events has been capped at 5,000, or 50 percent of venue capacity.

Health minister Norihisa Tamura told a press conference the government will decide whether to extend the current state of emergency after examining the latest data.

The government had initially been reluctant to place the tougher restrictions on Okinawa, which is currently under quasi-emergency measures, because the prefecture had opted not to ask restaurants to stop serving alcohol due to a backlash from businesses.

But it reversed its position after daily coronavirus cases in the prefecture topped 200, with more than 90 percent of its hospital beds for COVID-19 patients already filled and Tamaki saying the medical system is in a "crisis situation."

The expert panel on Friday morning also approved the ending of quasi-emergency measures in the western prefecture of Ehime on Saturday, earlier than the previous deadline of May 31.

Meanwhile, the government rejected a request from Gifu to be placed under the state of emergency, having deemed that the situation in the central prefecture is stable.