Japanese Prime Minister Yoshihide Suga says he is "aware that many people have voiced their concerns and anxieties" about the Olympics but reiterates his vow to make them "safe and secure." (Photo by Arisa Moriyama)
Nikkei staff writersMay 28, 2021 19:00 JSTUpdated on May 28, 2021 21:59 JST | Japan
CopyCopied

TOKYO -- Japan has officially extended the coronavirus emergency in Tokyo and eight other prefectures until June 20, roughly a month before the scheduled start of the Olympics on July 23.

Prime Minister Yoshihide Suga's government made the call on Friday, out of concern for scarce hospital beds and the need to control virus variants. The move buys time to accelerate Japan's vaccination campaign and prepare a safer environment for the Tokyo Games, which have sparked widespread opposition.

"The next three weeks will be an important time to achieve results from vaccinations and our control measures," Suga told reporters Friday evening. "I ask for everyone's cooperation and understanding."

Acknowledging resistance to the Olympics, he said: "I am aware that many people have voiced their concerns and anxieties. We are listening carefully to those voices and are working with people to ensure a safe and secure event."

The emergency decree -- first declared on April 25 in Tokyo and the greater Osaka area, and already extended once earlier this month -- was due to expire next Monday. Now the two metropolises as well as the prefectures of Aichi, Fukuoka, Hiroshima, Hokkaido, Hyogo, Kyoto and Okayama face another three weeks under restrictions on dining and shopping.

To soften the blow, the government will step up support for families and businesses in need, including providing up to 300,000 yen ($2,730) for households over a three-month period. It will also extend a deadline for businesses that want to apply for interest-free and unsecured loans.

Ahead of the announcement, Yasutoshi Nishimura, the minister in charge of the coronavirus response, told an expert panel on Friday, "There will always be waves of infections, so we must make the situation manageable to prevent any rebounds." He also warned about the spread of coronavirus variants and worsening medical care capacity.

Japan has seen its daily new infections slow since last week, but the government fears variants -- including one first identified in India -- could quickly push cases back up. 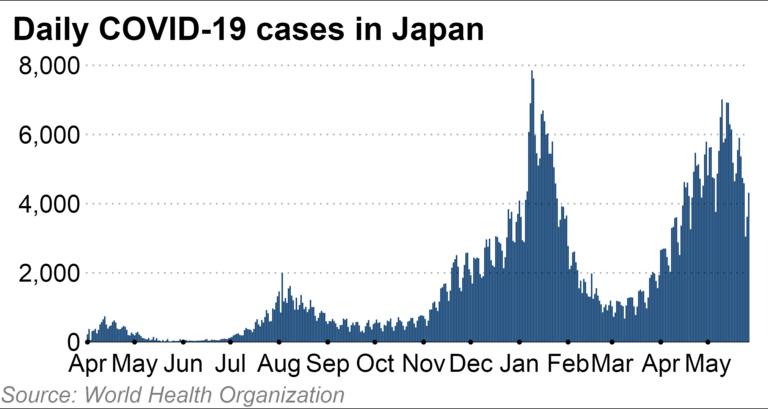 The measures the government is maintaining include a ban on serving alcohol at restaurants and bars, which are asked to close by 8 p.m. Large commercial outlets such as department stores, shopping malls and movie theaters are also urged to shut their doors at that time. Big events are supposed to limit spectators to 5,000 or 50% of the venue's capacity, whichever is lower.

Suga hopes to keep the virus in check while speeding up jabs. Large-scale inoculation sites for the elderly have been set up in Tokyo and Osaka, with the Self-Defense Forces called in to help. By Wednesday, the government said about 2.8 million health workers and 2 million seniors had completed their second doses.

In his Friday news conference, Suga said a total of 11 million shots have been administered overall. He stressed that Japan has secured enough COVID-19 vaccines, including a supply of 100 million doses due by the end of June and plans for another 100 million by September.

The prime minister said around 400,000 to 500,000 shots are now being given per day -- short of his 1 million per day target. He said his daily goal should be reachable by mid-June.

He also said that within the next month, based on the status of reservations, vaccinations would become available to people with underlying medical conditions and other members of the general public in municipalities with a clear outlook for completing inoculations of seniors.

The question is whether all this will be enough to guarantee the safety of the Olympics. Within Japan and abroad, critics are urging officials to cancel the games or postpone them a second time; they were originally scheduled for summer 2020.

Foreign spectators will not be able to attend, and many teams are working to vaccinate their personnel, though this is not a requirement for participation. But Naoto Ueyama, head of the Japan Doctors Union, on Thursday warned that inviting teams from around the world risked concentrating mutations of the virus in Tokyo, according to Reuters. He said this could spawn a new "Olympic strain." 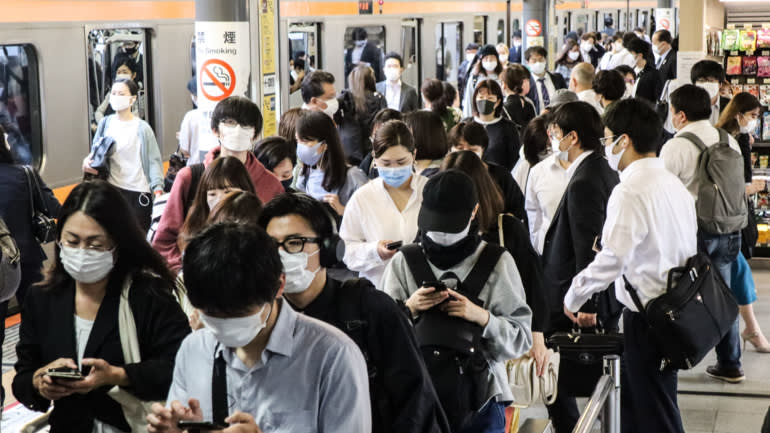 Tokyo's train stations can still be busy despite the state of emergency and encouragement to work from home. (Photo by Ken Kobayashi)

Japan has pledged to keep the games "safe and secure," as Suga reiterated.

He stressed that a series of control measures will be implemented to prevent outbreaks stemming from the games. Currently, around 59,000 Olympics-related staff and media are expected to descend on Tokyo, along with 19,000 for the Paralympics. But the government hopes to trim those numbers further.

In addition, Suga pointed out that participating athletes and officials will be thoroughly tested, as well as restricted to certain accommodations and means of transportation. They will not be allowed to sightsee or mingle with the general public, and "will be subject to thorough behavior management, including disqualification for any malicious violations," Suga said.

Still, International Olympic Committee Vice President John Coates recently stirred controversy by saying that the Olympics would "absolutely" go ahead even if Tokyo remains under a state of emergency.

As of Wednesday, the number of new infections per 100,000 people exceeded the level for Stage 4 -- the worst tier on the government's scale of the pandemic's severity -- in eight prefectures. Nine prefectures, excluding Tokyo, have hospital bed occupancy rates equivalent to Stage 4.

The government seeks to lift the COVID-19 emergency once these indicators fall below Stage 3 levels.