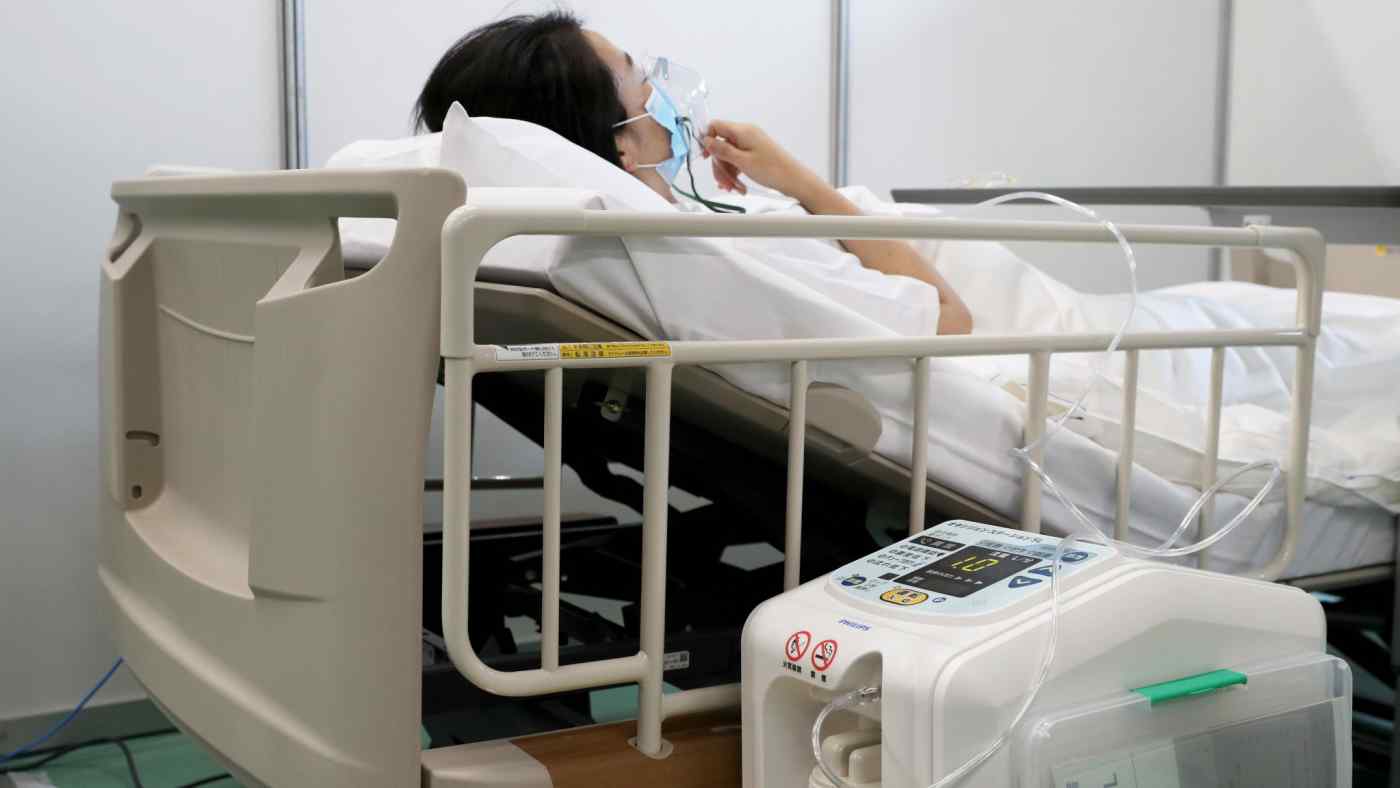 TOKYO -- The number of coronavirus patients in Japan told to recuperate at home has surged to the point where there is a near shortage of medical devices needed for treatment.

There were 127,000 homebound COVID-19 patients nationwide on Wednesday last week, including those recovering in hotels and those wait-listed for hospital vacancies. The count has mushroomed more than nine times from the 14,000 stay-at-home patients recorded on July 21.

In Tokyo alone, the number of homebound cases jumped from 6,000 to 34,000 patients over the same span. However, the city government only has roughly 500 oxygen concentrators to go around, and is currently negotiating with five distributors to procure more.

While the wards and other local governments that make up Tokyo separately have their own oxygen concentrators, the prospects for sufficient supplies are bleak.

There may be a shortage of oxygen concentrators if the number of infections fails to recede in the near future, the health ministry warned. On Aug. 13, the agency sent a notice to manufacturers -- cosigned by the Ministry of Economy, Trade and Industry -- seeking increased production and stable supplies.

"We will need a production increase of more than 1,000 units a month," said a health ministry official.

There are concerns that pulse oximeters, which measure a patient's blood oxygen levels from their fingers, will be in short supply as well. Patients are responsible for returning the oximeters, raising the risk that the number of available devices will dwindle.

Tokyo acquired about 75,000 pulse oximeters, but the number of units returned is "unknown," according to a city official.

Osaka Prefecture has about 17,000 pulse oximeters, mainly at public health centers under its control. The government is negotiating with manufacturers for an additional 3,000 to 4,000 units by the end of this month.

Kanagawa Prefecture on Saturday abandoned a policy to provide one oximeter per person and instead limited supplies to one device per family.

Concentrators deliver air with a 25% to 30% concentration of oxygen, up from the normal 21%. Normally, demand for the devices comes chiefly from the nearly 200,000 patients suffering from chronic respiratory failure nationwide and monthly deliveries stood at only 2,000 to 5,000 units a month.

Manufacturers are rushing to boost production. The industry lifted oxygen concentrator inventories by 1,000 to 2,000 units around April, but orders kept surging.

"It's difficult to meet all the demand," said a representative from Teijin, Japan's leading oxygen concentrator maker that commands a roughly 50% market share.

Konica Minolta, which makes pulse oximeters, has expanded production to 20 times the pre-COVID level since June.

Industry peer Omron has received orders that roughly double its original production plans. The company has all but sold out its inventory and expects to increase supplies from contract manufacturers in September.

"We're running short on more than 10 types of semiconductors, mostly microcontrollers," said a source at a pulse oximeter maker.

Solely increasing supplies of oxygen concentrators will not lead to efficient use. Doctors and public health centers decide who should receive the equipment, but the rising cases of delta variants have put hospital admittances at a virtual standstill.

A medical examination is required for assigning an oxygen concentrator or retrieving used equipment from patients. The mounting number of cases has stretched thin the available physicians. For oxygen concentrators to be assigned without a doctor, there will need to be a framework to ensure the patient receives the correct volume of oxygen. A pulse oximeter measures how much oxygen is in a person's blood.   © Kyodo

Tokyo's public health centers contact stay-at-home patients at least once a day to ask about blood oxygen saturation as well as body temperature. If the saturation level falls below 93%, that triggers a "moderate symptoms II" alert, requiring hospitalization.

However, there are an increasing number of cases where no hospital can be found that can accept such patients. On Monday, Tokyo opened an "oxygen station" that can temporarily hold up to 130 COVID patients requesting emergency services.

"Administering oxygen is a medical procedure, so only doctors can use oxygen concentrators," said an official at a public health center. "First a medical association or a similar group needs to be contacted to arrange home visits."

In Tokyo, however, most of the equipment acquired by the city has been loaned out and there is a shortfall of concentrators themselves. Some doctors have resorted to bringing concentrators from their own hospitals, said the public health center official.