Lack of flexibility results in too few beds for coronavirus patients 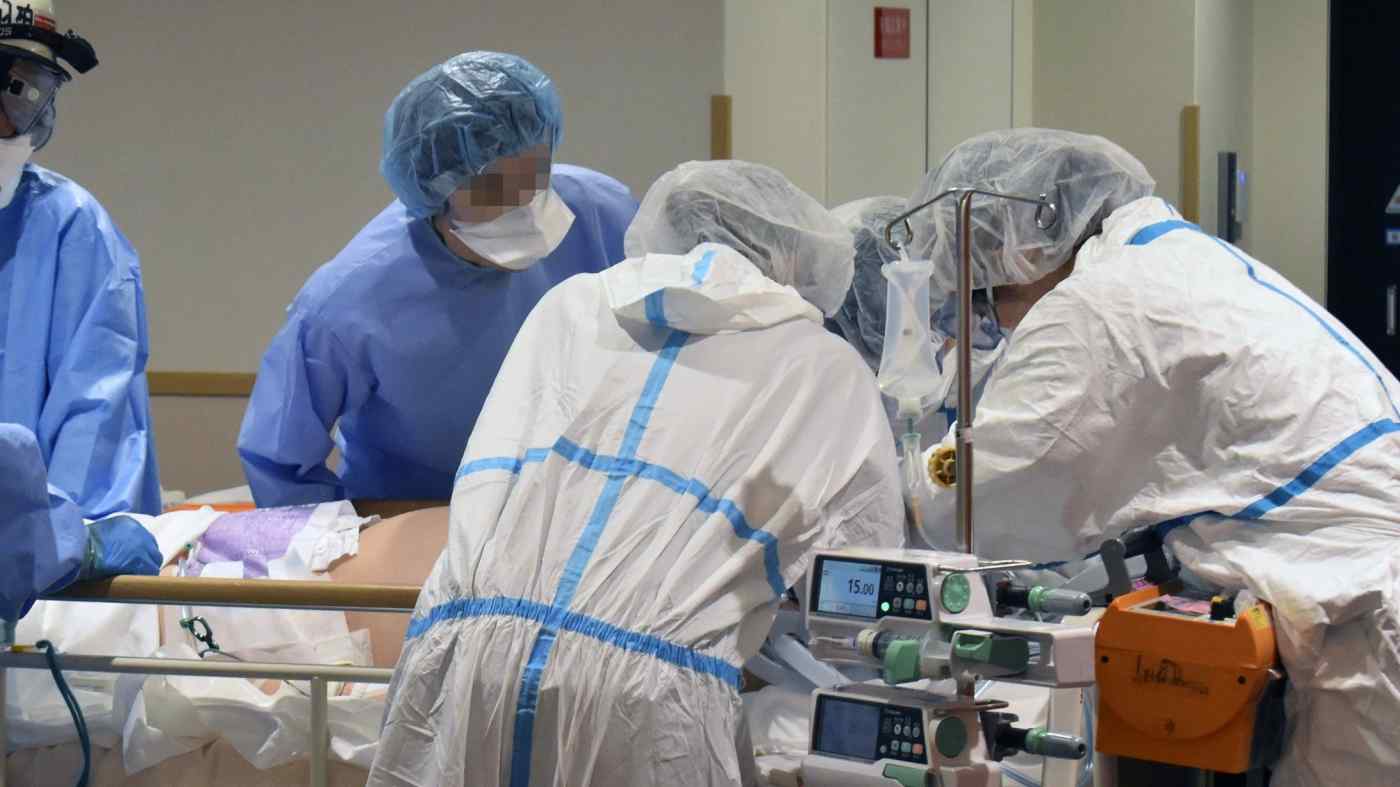 TOKYO -- Hospitals in areas of Japan hit hard by a resurgent coronavirus outbreak are struggling to accommodate patients, despite far lower case numbers and more beds than in Europe or the U.S. A failure to adjust excessively rosy assumptions as facts on the ground changed is partly responsible for the situation.

Many experts had warned of the possibility of a winter surge for months. Yet the number of beds set aside for coronavirus cases has actually declined since the first wave last spring.

There is no shortage of overall capacity. Japan has a total of around 900,000 hospital beds for regular patients and infectious disease cases, of which only 3% or so have been allotted to the COVID-19 response.

In mid-May, when about 3,400 COVID-19 patients were hospitalized, more than 30,000 beds were expected to be available across the country. This fell to around 27,000 in mid-August, during the second wave. Because this surge largely affected younger people and brought relatively few serious cases, local authorities may have grown complacent about securing more capacity.

As a result, the number of beds available had barely budged in late December, during the current third wave, compared with more than four months earlier.

This stands in contrast to hospitals in other nations that have adapted more flexibly to surges in coronavirus patients.

In the U.S., where state health authorities hold significant power, New York has directed all hospitals across the state to add 25% more beds and asked retired doctors and nurses to return to work. The U.K.'s National Health Service, which is directly overseen by the health ministry, told hospitals in December to free up all possible beds for coronavirus patients. The current bed numbers for Japan are derived from scenarios provided by experts based on the first wave and have not changed much since then even as the actual situation has worsened. Tokyo, for example, had been projected to see a peak of 477 new cases per day, yet it reported 1,337 on Dec. 31.

"Even when a bed opens up, it's filled right away by a new patient," said an employee at a university hospital in Tokyo that has brought in six COVID-19 patients, twice as many as it originally set aside capacity for. At the Tokyo Medical and Dental University hospital, the eight beds for severe coronavirus cases are almost always occupied, and the 25 beds for moderate cases remain about 60% to 70% full.

Nationwide, about 40% of the beds that municipalities expect to be able to provide for coronavirus cases were occupied as of late December, according to the health ministry. But more than 50% of beds are full in Tokyo and other hard-hit areas, and many individual facilities are at their limit.

And although the surge has sent municipalities scrambling for beds, hospitals already have their hands full with existing patients. Tokyo has secured only about 3,500 of the 4,000 beds it requested from medical institutions.

The lack of capacity for COVID-19 stems in large part from private hospitals. A health ministry survey in September of 4,201 hospitals with acute care capacity found that while 69% of public hospitals, as well as 79% of hospitals operated by such entities as the Japanese Red Cross Society and charitable organizations, were able to accept COVID-19 patients, this was true for only 18% of the 2,759 private hospitals surveyed.

Business concerns are a factor. Global Health Consulting Japan found that hospitals that admit coronavirus cases saw a larger decline in patients than those that do not. These facilities have often been forced to postpone such moneymaking procedures as surgeries, cutting into revenue.

And critics argue that facilities that do take coronavirus cases often fail to divide labor and resources effectively.

According to treatment data for roughly 16,000 hospitalized COVID-19 patients analyzed by Global Health Consulting, 72% of those released between February and September were considered "mild" cases not requiring supplemental oxygen. The trend remained largely the same in the months leading up to the current wave.

A more detailed analysis of data from February to June showed that a quarter of severely ill patients were treated in standard hospital beds. Meanwhile, more than half of mild cases received treatment in infectious disease facilities, intensive care units or other beds that could accommodate sicker patients.

During the third wave, "when moderate and worse cases requiring respiratory care increased, hospitals should have changed their thinking early on about admitting mild cases," said Aki Yoshikawa, chairman of Global Health Consulting. "They haven't used the lessons learned up through the second wave. The mismatch in beds needs to be fixed."

Additional reporting by Yumiko Oshima in New York and Yusuke Nakajima in London.