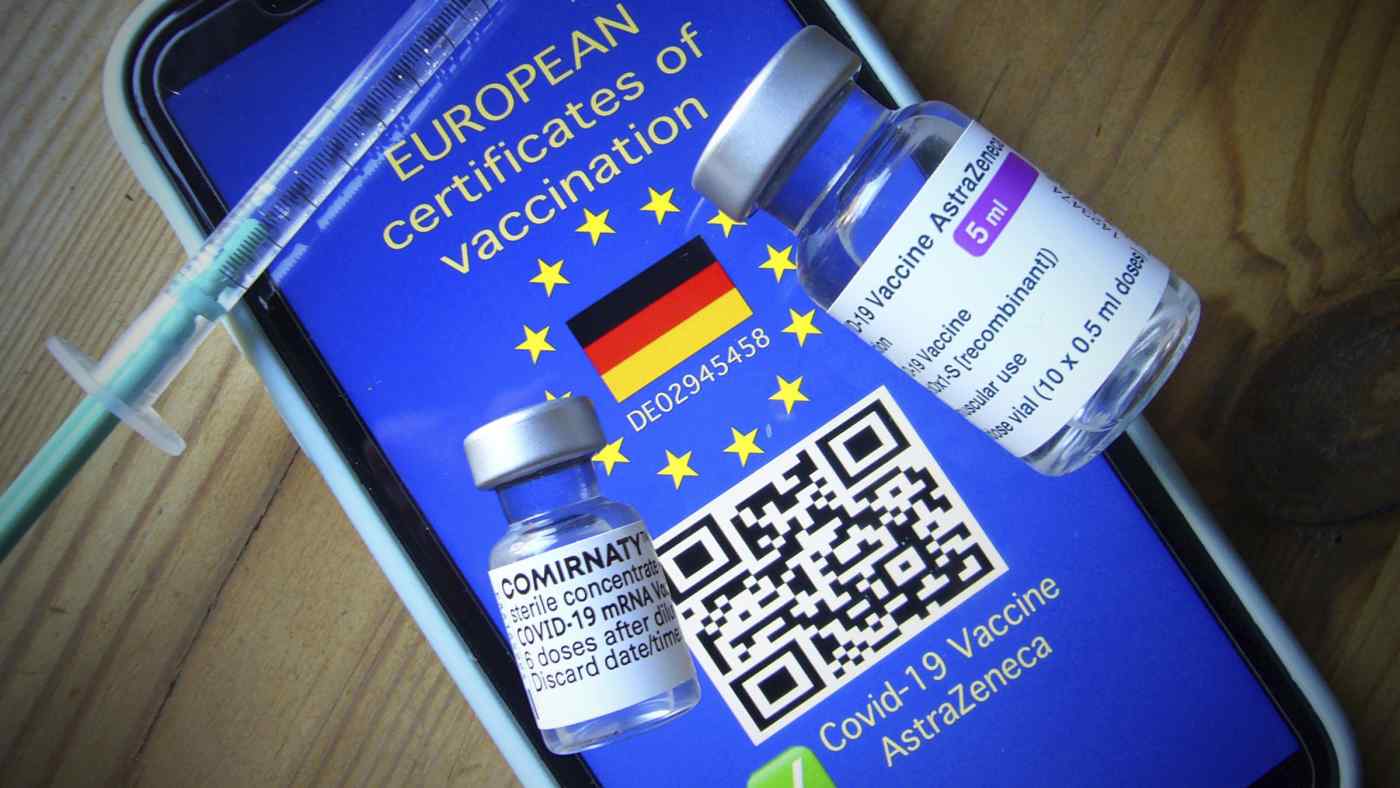 BRUSSELS/NEW YORK/TOKYO -- Japan intends to issue COVID-19 inoculation certificates this summer to vaccinated residents traveling abroad, hoping to give business travel and other economic activities a boost, Nikkei has learned.

Such so-called vaccine passports are gaining use around the world. The European Union will adopt them in July ahead of lifting restrictions on travel within the bloc.

Some senior Japanese government officials already carry unofficial certificates when they travel to Europe, the U.S. or elsewhere because they increasingly are asked whether they have been vaccinated.

An interagency team led by Chief Cabinet Secretary Katsunobu Kato is discussing an official program for businesspeople and others. Plans call for issuing a paper certificate this summer, followed by a digital version -- possibly used through a smartphone app -- by the end of the year.

Japan has lagged other developed nations in vaccinations, but now is procuring and distributing more doses made by Pfizer and Moderna. The country has been inoculating residents 65 and older since April, and vaccinations in corporate workplaces will start on June 21.

Vaccine passports are expected to ease the way for businesspeople in different countries to meet in person by reducing the risk for both the traveler and host nation.

"From a businessman's perspective, it would be ideal if a vaccine passport makes free movement possible," said Ken Kobayashi, chairman of the Japan Foreign Trade Council.

The passports will be issued by local governments that hold information on residents and are responsible for giving the vaccines. Information such as the person's name, the vaccine manufacturer and the inoculation date will be listed. Japan's central government is expected to guarantee accuracy by linking the certificates to a national vaccination records system.

Users will present the vaccine passports when taking international flights and entering foreign countries. Foreigners living in Japan who are returning to their home countries are among the anticipated users, in addition to Japanese citizens going abroad to study and for business.

"The 14-day self-quarantine period after returning home is the biggest hurdle for overseas travel," said an official at travel agency H.I.S. "The tide will turn if restrictions are eased with the introduction of the vaccine passport program."

Japan models its scheme on the EU Digital COVID Certificate debuting July 1. The EU certificate, issued to those who have been vaccinated or have recovered from COVID-19, will exempt holders from self-quarantines and testing. Seven countries including Germany are using them on a trial basis this month.

On May 31, the European Commission recommended that bloc members gradually ease travel restrictions, taking into account the introduction of the vaccine passport. The EU is expected to allow visitors from outside the bloc, such as the U.S. and Japan, if they received vaccines approved by the EU.

Critics say vaccine passports could lead to discrimination against those who are not vaccinated. In the U.S., different states are taking different approaches. New York launched the Excelsior Pass smartphone app showing a person's vaccination history in March, and the app has been downloaded more than 1 million times.

But Georgia has banned the state's public entities from requiring vaccine passports, based on the view stated by Gov. Brian Kemp that "vaccination is a personal decision between each citizen and a medical professional -- not state government."

Georgia said it will not share the state's vaccination records with any public or private entity for the purpose of a vaccine passport program, even though it will continue urging residents to be inoculated. At least 10 states have similar restrictions, according to U.S. media.

Japan is debating the matter cautiously. One proposal calls for the central government to create unified guidelines to prevent a mishmash of rules created by companies and municipalities hoping for a speedy return of normal economic activities.

International cooperation will be essential for a vaccine passport program to work. The Group of Seven nations confirmed the need to work together on this issue at a recent meeting of health ministers in the U.K. Nations hope to create a framework for recognizing each other's vaccine passports, with the World Health Organization playing a central role.