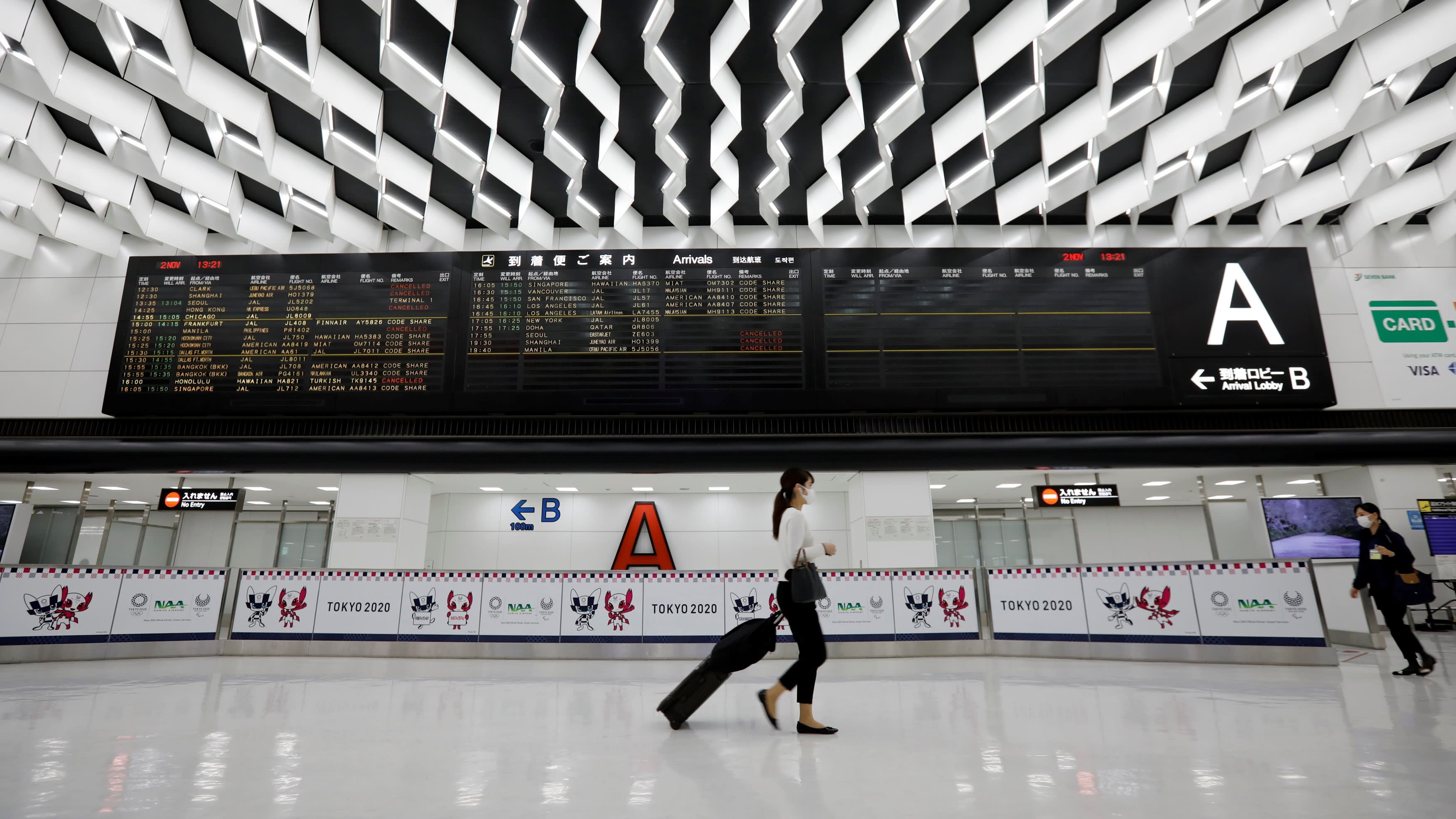 A traveler walks through the arrival zone at Narita International Airport near Tokyo. Japan is facing a resurgence in COVID-19 cases, particularly in cities like Tokyo and Osaka.   © Reuters
YUSUKE KONISHI, Nikkei staff writerNovember 26, 2020 04:53 JSTUpdated on November 26, 2020 05:51 JST | Japan
CopyCopied

TOKYO -- Japan's coronavirus advisory panel on Wednesday urged residents to avoid traveling to and from hard-hit parts of the country for three weeks -- a period seen as the make-or-break point to prevent an explosion of new cases.

"The next three weeks will decide whether we can keep new infections under control," said Yasutoshi Nishimura, minister in charge of economic revitalization, to reporters after meeting with the panel.

If the government fails to contain the virus, "we will have to consider declaring another state of emergency," he said.

Japan uses a four-stage scale to measure the outbreak's severity. While local governments have the final say on where they fall on the scale, the panel's chairman, Dr. Shigeru Omi, named Sapporo, central Tokyo, Nagoya and Osaka as examples currently meeting the criteria for Stage 3 -- the second-worst category.

The prefecture of Hokkaido, where Sapporo is located, had crossed into Stage 4 on two of the six indicators used in the scale, according to data published Friday by the health ministry.

The advisory panel does not want residents to travel to or from Stage 3 areas for the next three weeks unless strict measures to prevent the spread of the virus can be put in place. It is also urging the government to exclude travel originating from these areas from its Go to Travel initiative to promote domestic tourism.

"The most effective thing to do is stop traveling both into and out of these areas," Omi said.

Nishimura said there are Stage 3 areas not doing enough to combat the new coronavirus. "We will respond in coordination with their respective governors," he said.

If cases continue to increase, those who otherwise could have been saved may soon lack the care they need, the panel warned. In addition to the travel measures, it also pushed for reduced hours at businesses that serve alcoholic beverages, as well as tighter restrictions on events.

The Tokyo Metropolitan Government had so far hesitated on such curbs in response to the current coronavirus wave, given the economic impact. But the prefecture's seriously ill COVID-19 patients reached 54 on Wednesday, the most since Japan lifted its state of emergency in May, forcing it to act.

Tokyo will now ask all establishments that serve alcohol to close at 10 p.m. for 20 days starting Saturday. Small and midsize businesses that heed the call will each receive 400,000 yen ($3,830) in financial support.

"We need to do everything we can to prevent our health care system from collapsing," Tokyo Gov. Yuriko Koike said in news conference Wednesday.

The Osaka prefectural government is also urging alcohol-serving establishments in certain districts to close at 9 p.m. from Friday to Dec. 11. Hokkaido plans to extend its guidance to reduce hours, originally intended to end Friday, to Dec. 11.

Other areas are also weighing similar curbs. "If cases keep increasing, we won't have a choice," said Hideaki Omura, governor of Aichi Prefecture, where Nagoya is located.

Many areas have been alternating between phases of stricter restrictions to prevent the spread, and phases of more openness to keep the economy going. Tokyo urged a range of nonessential businesses to close during the first wave of the coronavirus in April, and also for bars and restaurants to close by 10 p.m. during the second wave this summer.