TOKYO -- After lifting the state of emergency in much of the country, Japan on Thursday will examine whether to ease coronavirus-related restrictions in the remaining regions, including Tokyo.

Prime Minister Shinzo Abe's government and health experts on an advisory panel say they are considering numerous criteria "comprehensively," but one deciding factor will be the number of cases ahead of Thursday's discussion.

Here are five things to know about Abe's looming decision.

How close is Tokyo to reopening?

The current state of emergency is set to expire at the end of May. In deciding whether to recommend an early exit, the government's team of experts said last week it will consider (1) the number of COVID-19 cases, (2) medical care capacity and (3) the means of monitoring the situation, such as testing capacity.

One key element is whether the number of new weekly cases falls to 0.5 per 100,000 residents. For Tokyo, the figure stood at 0.76 on Monday.

Reports suggest that the emergency status may continue in the greater Tokyo area and Hokkaido, but will be lifted in Osaka, Kyoto and Hyogo prefectures on Thursday.

What is the situation in Tokyo?

Tokyo's number of daily COVID-19 cases began a downward trajectory at the start of May. The daily number of new infections has been under 30 since Thursday, with only five reported on Tuesday. Though some panel members attribute the low number of cases to insufficient testing, Tokyo also has a significantly lower death toll than similarly sized global cities, such as New York and London. 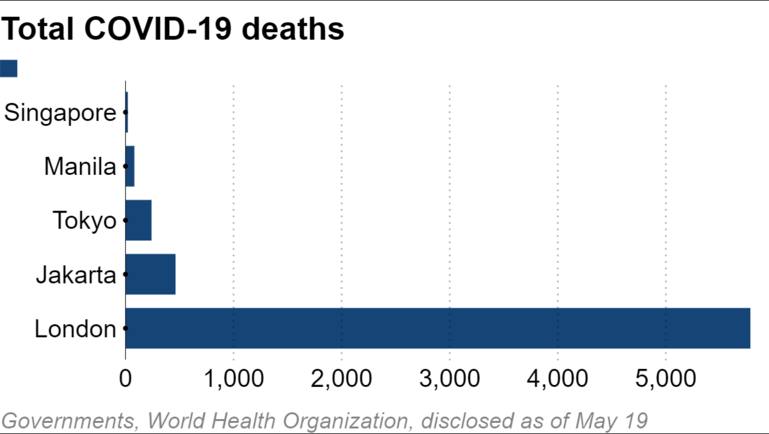 Business operations and the movement of people have been restricted in the city for almost two months. Tokyo Gov. Yuriko Koike has urged the public to refrain from going out since the end of March, citing the risk of an explosive increase in coronavirus infections. Abe's government declared a state of emergency April 7, giving local governments the authority to take steps such as requesting businesses to close.

These measures lack legal force, and Japan's restrictions have been lax compared with those in other countries. Many businesses nevertheless closed their operations voluntarily. With new infections declining, some companies -- such as department store operator Takashimaya and clothing store chain Uniqlo -- recently reopened a few stores in Tokyo.

What changes if Tokyo's state of emergency is lifted?

Koike said last week that businesses would be allowed to reopen in stages. Public establishments "of high importance for maintaining the culture and health of Tokyo residents," such as libraries and museums, will open first.

The next step involves relaxing restrictions for places able to avoid the "three C's" -- closed spaces, crowded places and close-contact settings. Theaters and some restaurants could fall into this group. Easing restrictions could bring longer business hours for restaurants, which now are asked to close at 8 p.m. The final step would be to reopen the types of businesses that caused clusters of infections in the past, such as concert halls.

What are the risks?

The experts advising Japan's government stressed that even after the state of emergency is lifted, preventive measures such as social distancing need to stay in place. The risk of a new outbreak remains, as seen in South Korea and other countries that eased restrictions.

To guard against a possible second wave, Tokyo set its own criteria for easing. These include maintaining fewer than 20 new daily cases and being able to trace infection routes for at least half of the cases. Koike warned that the effects of the long Golden Week holidays that ended May 6 are not yet visible because of the virus' two-week incubation period.

Abe warned last week that the virus has not disappeared, and he retains the option of declaring a state of emergency again.

Increasing coronavirus testing capacity and controlling the strain on the medical system remain a challenge. Antigen kits, which enable easier and faster testing than polymerase chain reaction tests, were approved for the first time in Japan only last week.

How about the rest of Japan?

Other regions still under the state of emergency include Osaka and Hokkaido. Their status also will be reviewed Thursday under the same guidelines.

The government and the experts also will consider the movement of people between neighboring prefectures. For example, Kanagawa and Saitama are home to densely populated bedroom communities near Tokyo.