Falling offerings and fraying social bonds have some considering closure

OSAKA -- The new coronavirus has people everywhere avoiding crowded spaces, and in Japan that includes temples. The number of services for the traditional Buddhist holidays of Bon and Higan has fallen, putting some temples under financial strain.

Temples were already facing a falling number of parishioners because of Japan's shrinking population, and the pandemic has exacerbated the issue. "If the situation continues, it could lead some temples to close," said one expert. "Each denomination should consider some kind of organizational support."

"The number of visits I made to parishioners fell sharply this summer," said the 44-year-old chief priest of a temple in the Osaka Prefecture city of Sakai. About 270 households attend services at his temple. "If the coronavirus drags on, I'm not sure I can maintain my relationship with them."

In a normal year, the temple offers a Bon service called Tanagyo, which involves the priest going to temple members' homes and reciting sutras as part of a memorial service for their ancestors. Offerings during the Bon season often exceed 1.5 million yen ($14,200), and they are used to pay for temple maintenance and to cover the monks' salaries.

In previous years the priest would visit almost every household, but this year the situation changed completely. From July, one household after another declined his Tanagyo visits. The priest is thorough in trying to prevent any spread of the infection, checking his temperature every morning. But many households have older family members who are at risk of developing serious cases of the disease, and others have children who were not able to return home for the holiday. As a result, they put off holding the ceremony. The amount of donations this year was less than half that of previous years.

Temples were in a difficult situation even before the pandemic. Their main source of revenue was donations that came in from memorial services, including those during Bon in late summer and Higan around the vernal and autumnal equinoxes. Worshippers had supported the temples' operations, but the declining birthrate and shrinking population meant less income for temples. 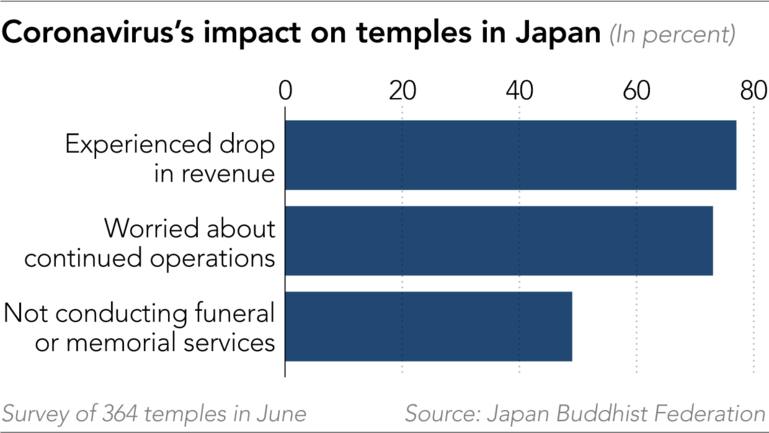 More than 40% of temples reported an annual income of less than 3 million yen in a 2015 survey by the Jodo Shinshu Hongwanji-ha Research Institute. About one in four priests said they "could not get by at all" on their temple income. It is not uncommon for priests to have second jobs or pick up part-time work, and 20% of temples were considering closing or merging with another temple in the future.

The pandemic has made things worse. In June, the Japan Buddhist Federation released a survey of about 360 temples across the country. More than 70% of respondents said they had experienced a drop in revenue and were worried about continued operations. Of the 279 temples that saw their income fall, more than half said their revenue was down more than 40% from previous years.

Some said they were having difficulty covering their temple's fixed costs, or wanted to get a second job but could not because of social conditions or age. Others said they were dealing with the situation by eating into their savings.

Some respondents worried about their temple's continued existence, saying that they are losing touch with temple members. Others said that funerals and other services had been simplified because of the coronavirus, and temples themselves may even become unnecessary.

Some temples are trying to develop new sources of income by attracting more visitors through PR videos online. A temple in the Chiba Prefecture city of Ichikawa has seen its income from offerings and merchandise sales grow by several times over the past decade.

But only a few of these kinds of innovations bear fruit. Only a limited number of temples have features that are attractive to the general public, and transportation and other factors can also play a role.

In response to the temples' distress, the Shingi Shingon sect, which is primarily made up of more than 200 temples in and around Wakayama Prefecture, decided in June to reduce the fees that each temple pays to the sect by 25%. "We want to support the temples so they will be there for future generations," said a representative of the sect.

"Buddhist temples cost quite a bit to maintain," said Akinori Takase, a lecturer at Taisho University who is also a deputy chief priest at a temple in Shizuoka Prefecture. "But more temples could close if the effects of the coronavirus, like the drop in the number of services, continue for a prolonged period of time."

"Temples have an important role to play in local communities," said Takase, noting that some serve as recreational spaces for local residents by hosting sessions of rakugo, a type of traditional comic storytelling, and other forms of entertainment.

"It's difficult for the government to provide support because of constitutional restrictions," he added. "The first step is for each denomination to determine the condition of each temple, and then provide support for them according to their size."