TOKYO -- Public health centers across Japan are faced with scaling back their contact-tracing programs for the coronavirus as they struggle to find enough people to help contain a mounting outbreak.

Since the early part of this month, Kanagawa Prefecture has narrowed the targets of its contact-tracing team to a few select populations, including those working at hospitals, schools, retirement communities and welfare facilities. Movement tracing of community spread has generally ceased.

Some cases require hours of probing per person. This has made it challenging to provide an adequate response to new COVID-19 patients.

"Right now, we are granting first priority to those who are already infected," said a medical crisis task force officer.

On Friday, Tokyo announced it will limit contact tracing to the elderly and other high-risk populations. At the public health center of Tokyo's Kita Ward, tracking of infection routes has been curtailed. The process now involves asking the patient how they might have become infected, to the best of their knowledge.

"With the sharp rise in cases this month, we no longer have the time to spare to identify the [infection] route," said an official.

Hirofumi Yoshimura, the governor of Osaka Prefecture, cited Kanagawa in particular when describing the potential fallout from a wider community spread.

"There is a good chance that the role of public health centers will be cut" in such areas as contact tracing, according to Yoshimura.

Public health centers have engaged in detailed contact tracing since the first wave of infections arrived early last year. Nowadays, the infection path remains undetermined in about half the cases in Tokyo.

Across Japan, more than 7,000 people were recently waiting for a hospital or other place to recuperate, about 10 times the number from a month ago. A growing number of people require in-home observation, which has greatly added to the workload at public health centers. 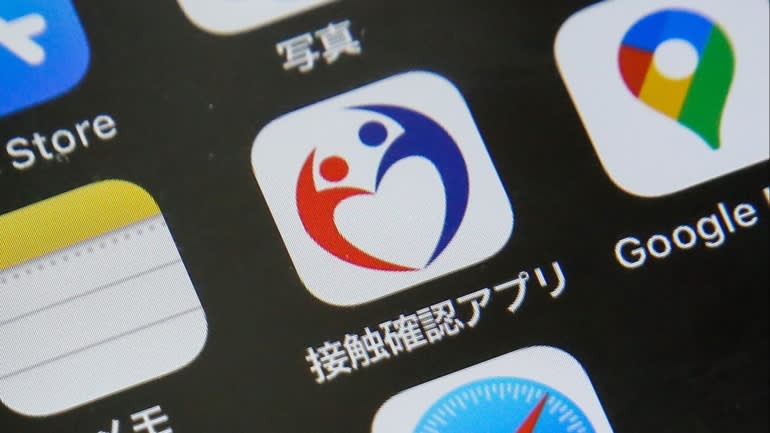 The health ministry's Cocoa contact-tracing app has not helped to alleviate the burden on staff at public health centers as envisioned. (Photo by Akira Kodaka)

It will not be easy to expand the number of health professionals. Digital technology is expected to provide needed relief, but the implementation has been less than adequate.

The national contact-tracing app Cocoa has been downloaded 24.25 million times as of Monday, but has registered only 9,331 positive cases. Few people have responded to notifications to apply for testing at public health centers.

The app "has not lightened the burden of infection-route tracing," said a local government official.

The downscaling of community spread tracking programs will heighten the risk of outbreaks caused by asymptomatic people. This in turn will further complicate efforts to rapidly identify infections by testing people who have come into close contact with known patients.

In recent weeks, more people have opted to pay out of pocket for private testing. Local governments face the crucial task of putting together a framework that will quickly identify positive cases from that group.

Public health centers also assign hospitals for coronavirus-positive patients, and dispatch professionals to observe subjects recuperating at home. The facilities have now taken on the additional task of arranging venues for citizens to receive vaccines. The public health center in Tokyo's Kita Ward has scaled back its contact-tracing efforts.   © Kyodo

"In regions where infections have spread, the limited human resources at public health centers should be concentrated on saving lives," said Koji Wada, professor of public health at the International University of Health and Welfare. Wada suggested using people from the private sector to maintain contact tracing.