TOKYO -- A new surge of coronavirus cases in Japan is filling hospital beds at close to critical levels, putting pressure on government to take action to curb new infections and relieve strains on the health care system.

Japan set a record for new cases on Thursday, with 1,616 confirmed as of 8 p.m. The previous daily record was the 1,591 infections confirmed on Aug. 7. Medical experts and public officials have raised alarms that the country is heading into a third wave of the COVID-19 pandemic.

"I am extremely concerned that we could be facing a major wave comparable to what we saw in July and August," Yasutoshi Nishimura, the minister in charge of economic revitalization, told reporters Thursday after a meeting with public health experts.

The second wave in the summer was linked mostly to nightlife and primarily affected younger individuals. But the current increase spans a wider swath of the population through clusters at work, school and other settings.

Restaurants and other businesses may be told to close if the situation escalates, Nishimura said.

"We are not in a place where we need to declare a state of emergency right now," he said.

Japan's seven-day moving average for new infections reached 1,143.2 on Wednesday, about 80% of the peak during the second wave in August. The average also is rising at a similar pace, doubling in the past two weeks.

The number of coronavirus patients admitted to hospitals climbed 20% over two weeks to reach 3,592 on Nov. 4. Just 13% of hospital beds designated for COVID-19 patients were occupied nationwide at that point.

But seven prefectures including Tokyo, Osaka and Okinawa were above the 20% threshold for "Stage 3" on Japan's scale of the pandemic's severity, where major disruptions to the medical system may arise.

Medical services in parts of the country nearly collapsed during the initial wave of infections in the spring. Japan will need to ease the burden on health care providers before reaching Stage 4, the most serious on the scale, in which at least 50% of hospital beds are occupied and cases are rising explosively. 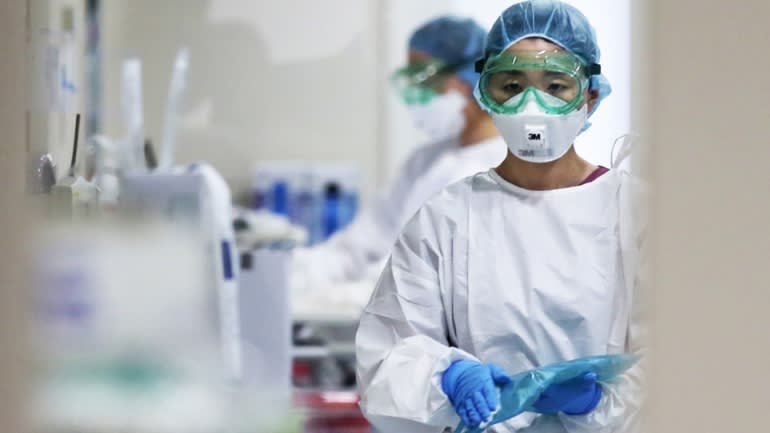 Experts in Japan's hard-hit regions are already on high alert.

On the northernmost main island of Hokkaido, the number of admitted patients more than doubled in a week to 494 as of Wednesday, filling 27.2% of the 1,811 beds dedicated to COVID-19 patients during peak times. The island also has over 100 recuperating patients it is still looking to place.

"We are now in the third wave," Hokkaido Medical Association Chairman Kiyoshi Nagase told reporters Thursday. "There are clusters even far away from [the island's largest city of] Sapporo, and I worry about the pressures on the health care system."

In Osaka, 30.6% of beds dedicated to critical coronavirus patients were occupied as of Wednesday. The percentage doubled in 10 days, fast approaching the peak under the second wave of 38%.

"We're seeing an increase in new cases while some patients who developed severe symptoms during the second wave are still recovering," said Osaka University professor Kazunori Tomono, who chairs the prefecture's expert council on the pandemic.

"It takes time for critical patients to recover, and we could see occupancy rates continue to rise," he said.

Japan, looking to focus resources on those most at risk from the virus, is restricting hospitalization to only critical patients, those 65 or older and those with preexisting conditions. Keeping low-risk patients at home or at accommodations other than hospitals could prevent the health care system from being overwhelmed.

Curbing new infections is a top priority as well. A government-hosted expert panel on Monday called for more involved preventive measures, citing the wide range of clusters popping up across Japan. It also said cooperation with universities and other relevant organizations will be critical.

The Japanese government plans to continue the "Go To" campaigns that encourage eating out and travel within the country, though they are expected to face greater resistance should cases continue to increase.

Japan needs to devise thorough solutions to prevent high-risk behaviors without bringing the economy to a halt, Shigeru Omi, who heads the expert panel, said on Nov. 6.

"This is the last chance to do this," he said.

The U.S. and Europe also have experienced a rapid surge in the virus recently. The U.S. topped daily records this week with over 140,000 new cases confirmed Tuesday and again Wednesday, according to Johns Hopkins University -- about double the numbers during the second wave in July.

The U.K. has reported over 20,000 new cases on multiple days this month, and Italy is approaching 40,000 new cases a day. The U.K. and France have declared another lockdown, stoking concerns of an economic slowdown.