TOKYO -- Japan's state of emergency, imposed in early April over the new coronavirus, lasted about a month and a half. The country escaped the initially feared explosive outbreak and the epidemic is, for the time being, under control. But something does not feel quite right. Many have been left to wonder whether the steps Japan took to combat the virus have been effective.

A member of an expert group of virologists and infectious diseases specialists summarized the situation well in mid-May, before the state of emergency was partially lifted: "The number of infections has definitely dropped. It seems the virus is being contained. But what had this effect? We're not sure."

In the early stages of the pandemic, the number of infections and deaths was largely determined by the effectiveness of each country's medical system and policy measures. Other countries now have a playbook with various options. The "Taiwan model," which successfully used information technology; the "South Korea model," which relied on thorough testing, tracing and quarantines; the "German model," which employed a rational strategy that relied on cooperation between government and academia, and so on.

Looking just at the number of infections and deaths, Japan is no different from these places. But no one is praising the "Japan model" because the steps it has taken lacked the rationality and consistency that comes with a respect for data. The government relied instead people exercising "self-restraint," limiting their public activities to minimize their exposure to the coronavirus. It is not an approach that can be copied by others.

Japan's restrictions on going out were based on the idea of reducing people's social contact by "80%." Originally this was a numerical target to reduce contact between people. But under the state of emergency, the focus suddenly shifted to reducing crowding in urban areas like shopping districts and big train stations. Reducing the number of people in crowded areas is not the same as limiting contact between people. In any case, there is no way to measure whether the targets announced by the government actually reduced social contact.

People have been left to wonder by what percentage social contacts declined in each prefecture after the declaration of emergency on April 7, and how those reductions affected the trend in deaths and infections. The answers will become clearer with time, but the 80% target, which had a weak scientific basis, created a great deal of confusion.

The government also failed to adequately explain the shortage of PCR tests, which screen people for the presence of the coronavirus. This created much public anxiety and distrust. It is believed that medical technicians in the health ministry played a central role in limiting the amount of testing. If the goal was to prioritize analyzing the epidemic, officials should have explained why the lack of testing was not a problem. But such no explanation was forthcoming.

The lack of testing made it difficult to get an accurate picture of the epidemic in Japan. Nor was it possible to come up with "effective reproduction number" -- the number of people each infected person infects.  Once this so-called R number fell below 1, other countries began relaxing social distancing measures.

Because there was no way to determine the R number in Japan, it was difficult to set criteria for lifting Japan's state of emergency, and the government was forced to decide based on three: the status of the infection, the condition of the medical system and the effectiveness of the monitoring system.

"Making a comprehensive decision" is a catchy phrase, but it leaves room for an emotional response from the public and speculation over policy. Conclusions that do not give proper weight to data inevitably invite misgivings.

The meandering of the panel of public health experts, whose place in the government was unclear from the start, also damaged public trust in the government's response to the virus. The group provided advice to the government only from a medical point of view; it did not make decisions on policy. Nonetheless, at times its presence was powerfully felt.

The best example of this came on May 4, when the panel unveiled "new lifestyle" recommendations. These included behavior modifications such as greater use of online shopping and sitting side-by-side when eating rather than across from one another. Such detailed examples from daily life are a far cry from medical advice. One could say that politicians and the administration, not wanting to take responsibility themselves, made skillful use of these experts' authority. 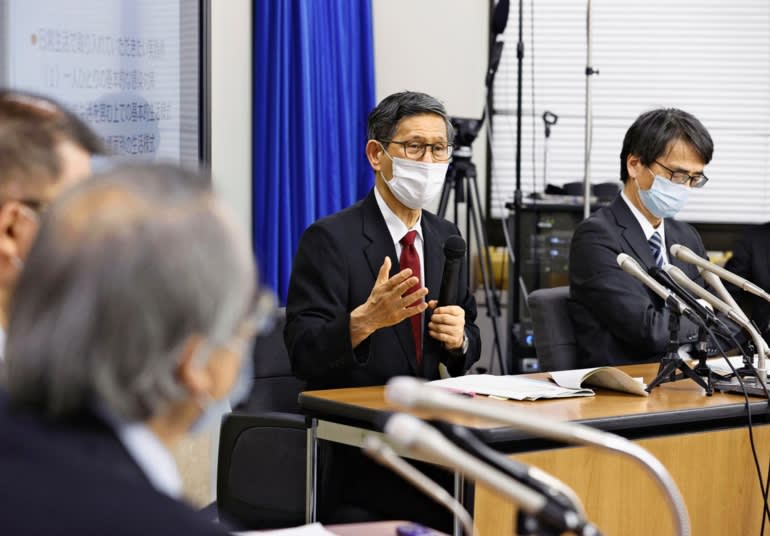 Takaji Wakita, right, and Shigeru Omi, chairman and vice chairman, respectively, of the government's coronavirus advisory group, speak at a news conference at the health ministry in Tokyo on May 4.

"Fighting an infectious disease requires the state to collect, analyze, investigate and then share appropriate information in a way that is easy to understand," said Mitsuru Fukuda, a professor at Nihon University who specializes in crisis management. "Making people think something is being hidden is a major mistake in risk communications."

In Japan there is a strong pressure to conform, and there are likely many people who refrain from behaving in ways that attract public attention. Although there was no punishment for going out, the decline in people's movements during the Golden Week holidays indicates that the declaration of a state of emergency may have been more effective than the lockdowns in cities overseas. But this kind of enforced restraint also amplifies coronavirus fatigue.

After autumn, a large second wave of infections is expected to hit the Northern Hemisphere. The government needs to thoroughly analyze and make clear the factors the helped keep the number of deaths and infections relatively low in Japan. People will not follow instructions so readily a second time if they are unreasonably asked to cut activity by 80%.