TOKYO -- Japanese cosmetics and household goods companies as well as alcoholic beverage makers are moving to increase production of hand disinfectant in response to a request by Prime Minister Shinzo Abe to help alleviate shortages caused by heavy demand due to the coronavirus.

Sanitizers, which come in various forms such as liquids, gels and moist towelettes, are in short supply in Japan as new coronavirus infections spread rapidly and consumers and hospitals rush to protect themselves by purchasing supplies, with some bouts of panic buying by consumers also seen. Face masks are another protective item difficult to find.

Another factor that may be contributing to such shortages is hoarding for resale at a higher price. The Ministry of Economy, Trade and Industry (METI) has urged people to refrain from making purchases with the intention of reselling them at a profit.

Responding to the ministry's call, Japanese online services developer DeNA, for example, announced a ban on sales of hand sanitizer and masks on its auction site. Mercari, one of Japan's top online marketplaces for secondhand goods, has also started removing overpriced sanitizer and banned sales of all masks.

Cosmetics and skin care giant Shiseido will start producing disinfectant at a monthly capacity of 100,000 liters, -- equivalent to 200,000 bottles -- at its four domestic factories in May. The company has already begun manufacturing at one domestic plant and also at facilities in the U.S. and France.

Shiseido has also developed a hand sanitizer aimed at people with sensitive skin. The formula, which has been approved by the Ministry of Health, will also be disclosed to other companies. Shiseido will sell the product solely to domestic hospitals via the government.

The sanitizer will be sold to hospitals before consumers get a chance to purchase it. Kao had already been increasing production to double and triple normal levels in February and March, respectively, but that was insufficient to relieve supply shortages. 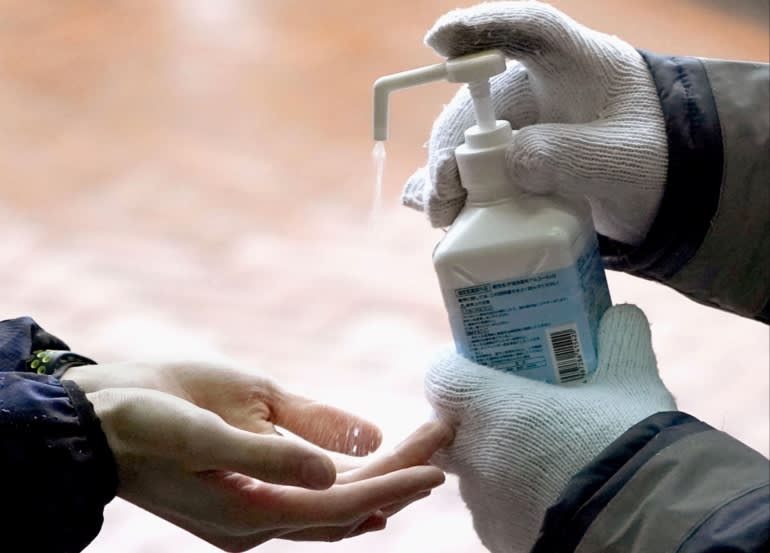 Demand for antiseptic solutions is increasing in Japan as the new coronavirus spreads.   © Kyodo

"The government will buy what doesn't get sold for our reserves," Abe said last Wednesday at a meeting with industry leaders, in an apparent bid to allay manufacturers' fears of being stuck with unsold inventories as he called for a boost in the production of critical goods that have become hard to find due to rising demand. Abe also called for stepped up production of medical gowns, masks and ventilators.

The challenge is not just for manufacturers but for wholesalers as well who find it hard to respond flexibly in order to increase supply because of the inventory risk, said Nobuhiro Tsunoda, chairman of EY Japan Tax. "If the timing of management decisions between wholesalers and manufacturers is misaligned, the flow of the supply chain will be disrupted, which will also cause a supply shortage," Tsunoda said.

Amid the supply shortage, Japan is also trying to increase the range of approved disinfection methods. The Ministry of Health, for example, has allowed the use of alcohol as a substitute for hand sanitizer as long as alcohol concentration is between 70% to 80%.

Takara Holdings, a major Japanese sake maker announced last Wednesday that it will sell high concentration ethanol to medical institutions and facilities for the elderly. The company will utilize plants that make ingredients for shochu -- a traditonal alcoholic beverage -- and plans to sell 90,000 liters, or 5,000 large-sized cans, per month.

Distiller Suntory Holdings has decided to offer sanitizer to medical facilities and nursing homes free of charge. The Japanese company has already started manufacturing disinfectant at its U.S plants and is offering hazmat suits and medical masks in Indonesia.

METI and the National Institute of Product Evaluation Technology announced last Wednesday that dishwashing soap could also be a substitute solution for sanitizer. An expert committee will test three priority ingredients contained in such kitchen detergents.