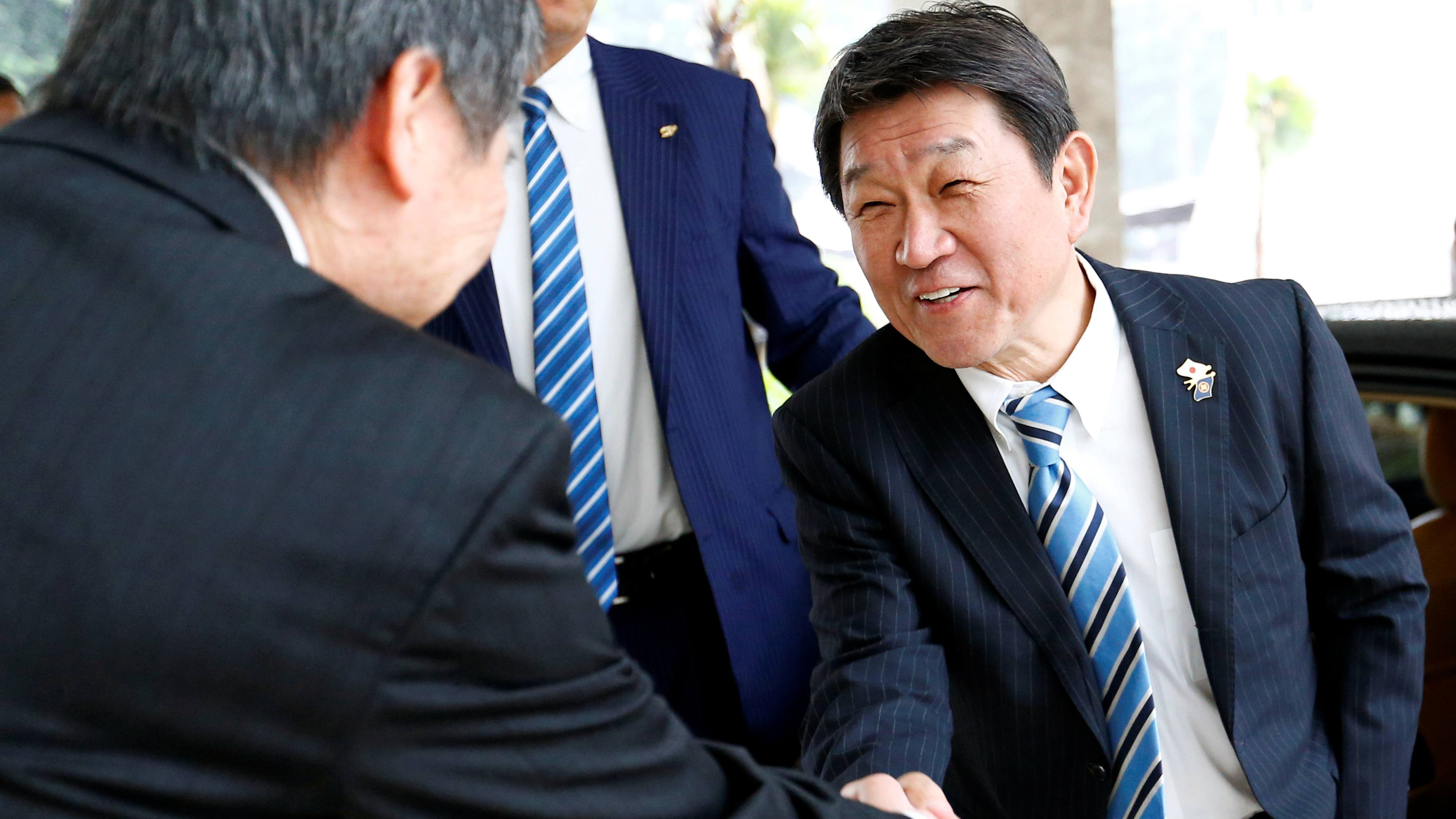 It is only his second overseas trip since the pandemic outbreak, following a visit to the U.K. earlier this month, where he advanced negotiations for a trade deal and discussed with British Foreign Secretary Dominic Raab ways to enhance security in the Indo-Pacific region to counter China's increased maritime activity. Motegi is thought to have discussed ways to strengthen intelligence sharing with the Five Eyes alliance of the U.S., U.K., Australia, Canada and New Zealand.

Much like that London visit, Motegi's tour of Southeast Asia is strategic -- aiming to keep the region from becoming too close to China.

As the first leg of the tour, Motegi visited Singapore and Malaysia from Wednesday. He will continue his tour of the region this week to spell out Japan's assistance plans, traveling to Papua New Guinea Thursday, followed by Cambodia, Laos and Myanmar.

Agreements are already in place for Japan to provide hospital beds and ambulances to some members of the Association of Southeast Asian Nations. In July, Japan said it will provide the equivalent of 11.6 billion yen ($109 million) in medical equipment and other supplies to five countries along the Mekong River -- Cambodia, Laos, Myanmar, Thailand and Vietnam. Many Southeast Asian nations have limited health care resources and have required foreign assistance to combat the coronavirus. China has emerged as a front-runner in the race for a vaccine, with nine vaccine candidates in clinical trials, including five in Phase 3, the final stage of the process toward approval.

Japan and the U.S. fear that China's "vaccine diplomacy," like its earlier "mask diplomacy," will help it increase its influence in the region further.

"It's critical that we keep ASEAN on the side of Japan and the U.S.," a Japanese Foreign Ministry official said, explaining Japan's focus on the region.

Chinese Foreign Minister Wang Yi pledged cooperation on vaccine development in a phone call with Indonesian counterpart Retno Marsudi on July 30. Indonesia has one of the highest case counts in Southeast Asia. Certain ASEAN countries like Myanmar, Laos and Cambodia have traditionally enjoyed strong relations with China even before the pandemic began.

Japan aims to woo these countries ahead of an upcoming series of ASEAN-related meetings, starting with the ASEAN Regional Forum in September -- the first time leaders from China, the U.S., Japan and the bloc will gather since U.S. Secretary of State Mike Pompeo slammed Beijing's claims in the South China Sea as "completely unlawful" last month.

Sparks were already flying at an online preparatory meeting in July, a diplomatic source said, with U.S. Assistant Secretary of State for the Bureau of East Asian and Pacific Affairs David Stilwell urging Beijing to abide by international law in the South China Sea. Chinese Vice Foreign Minister Luo Zhaohui apparently countered that Washington had no right to criticize when it had not signed on to the United Nations Convention on the Law of the Sea.

ASEAN members are divided on Beijing's moves in the South China Sea. The Philippines, for example, has kept some distance from both the U.S. and China despite its disputes in the waters with Beijing. Coronavirus assistance and other efforts will be key to winning them over on issues including the South China Sea, especially with many ASEAN countries suffering negative economic growth in the April-June quarter.

Like China, the U.S. offered its cooperation on vaccine development to Indonesia in an Aug. 3 call between Pompeo and Retno. The two officials also affirmed the importance of the rule of law in the South China Sea.

Pompeo also spoke with counterparts from Singapore, Brunei, Malaysia, Vietnam and the Philippines to counter Chinese efforts. Australia, a U.S. ally, also promised economic assistance to ASEAN at the end of June.

One of Japan's key contributions to its alliance with the U.S. is its ties to ASEAN, and Japanese Prime Minister Shinzo Abe visited the bloc for his first overseas trip when he began his current stint in office. The bloc is expected to remain a major part of Japan's diplomatic strategy, regardless of who wins the U.S. presidential election in November.