'Limited, concentrated' rules to target Tokyo restaurants -- with no fines for now 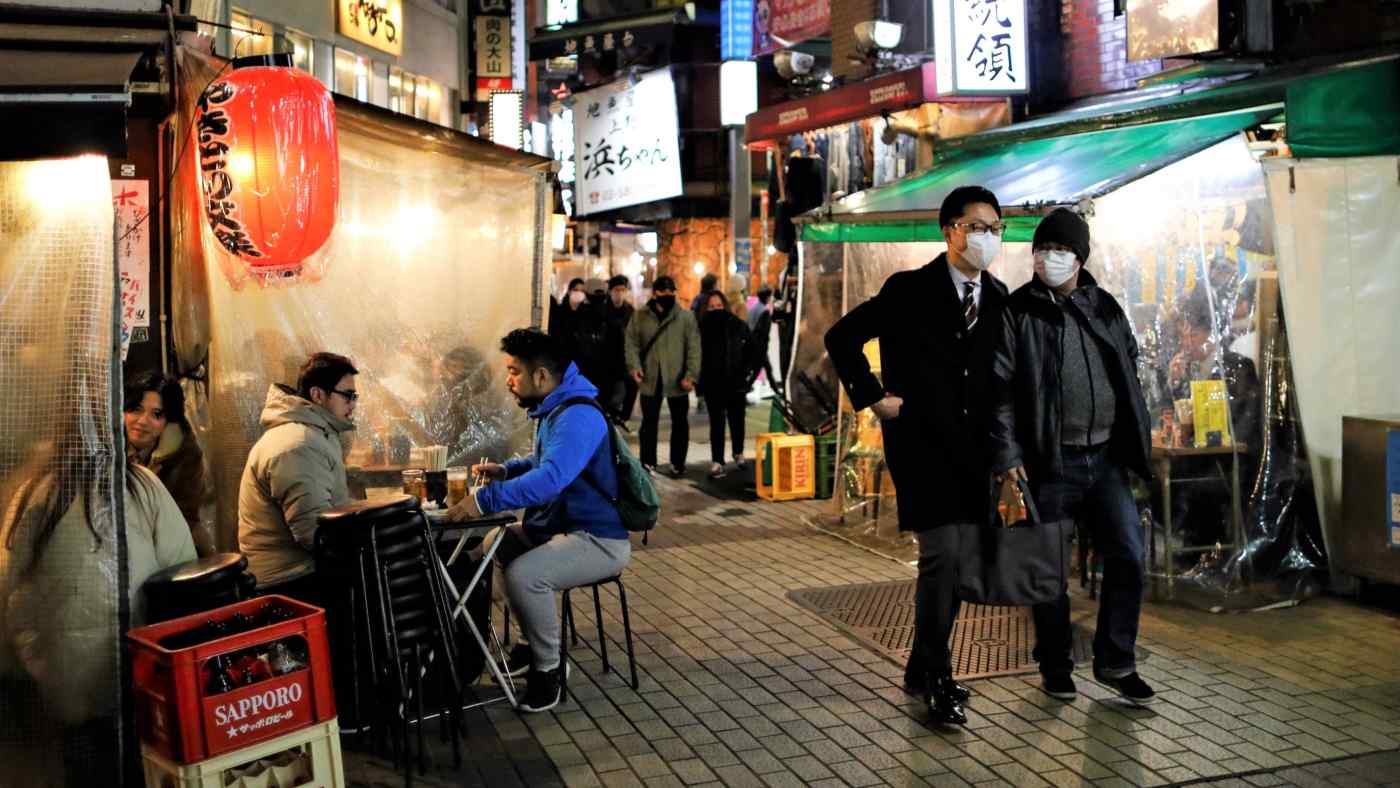 The new state of emergency for the Tokyo area is expected to focus on restaurants and bars, which experts see as major virus spreaders.   © Reuters
AKANE OKUTSU and MITSURU OBE, Nikkei staff writersJanuary 6, 2021 19:26 JSTUpdated on January 7, 2021 20:33 JST | Japan
CopyCopied

TOKYO -- Japan's coronavirus surge has pushed the government back into emergency mode.

Prime Minister Yoshihide Suga declared a state of emergency for the capital and surrounding areas on Thursday. The same day, Tokyo logged a record 2,447 infections -- another big jump from 1,591 on Wednesday.

The emergency will kick in at midnight and is expected to run until Feb. 7. "I promise to turn the situation around within a month," Suga told reporters.

This marks Japan's second "soft lockdown," after the first emergency was declared in April 2020. That one also lasted about a month.

Suga called for "limited and concentrated" restrictions this time around. The focus is on restaurants and bars, with schools to remain open. But the renewed curbs come just as coronavirus vaccines are tantalizingly close -- leading many to ask why Japan is behind other countries in starting inoculations.

What will this state of emergency entail?

The emergency is limited to the Tokyo metropolitan area, including the nation's capital and the neighboring prefectures of Kanagawa, Saitama and Chiba.

On Thursday, Suga announced the key elements of the plan: 1) shortening business hours for restaurants and bars, 2) reducing the number of workers at offices by 70%, 3) avoiding outings in the evening, and 4) restrictions on events.

While last year's declaration was nationwide and covered a varied range of businesses, the scope is narrower this time, as Suga's team attempts to minimize the economic impact. Restaurants and bars are asked to close at 8 p.m. from Friday, and the names of those that fail to comply can be publicized. Many department stores and commercial complexes are also expected to close by that hour.

Experts advising the government pin much of the blame for the spreading virus on the eating and drinking scene. They say relatively active people in their 20s to their 50s pose a high risk for catching the virus and passing it on at home or in the workplace. In Tokyo's batch of new cases on Thursday, for example, patients in their 20s made up the highest number, at 666. 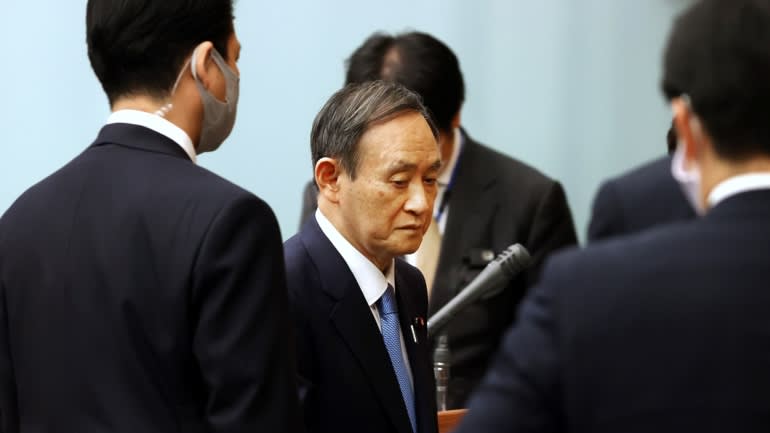 This explains the emphasis on discouraging people from hitting the pub. In other respects, the new measures are looser, with schools staying open and university entrance exams likely to go ahead as planned this month.

Nationwide daily COVID-19 cases continued to rise through the New Year's holiday season, surpassing the 7,000 mark for the first time on Thursday. Tokyo's spike, and new highs in its surrounding prefectures, are of particular concern.

Hospitals are feeling the heat, and there are few reasons to think the situation would improve naturally. Shrines and temples have been drawing crowds to pray for 2021. Spectators also flocked to the annual Ekiden long-distance relay race -- a New Year's tradition.

"Movement of people during December did not drop and the number of cases remained high in the first days of January," Suga explained this week. "There needs to be a stronger message."

Just how serious is the hospital situation?

The number of severe cases at Tokyo hospitals on Thursday rose to 121, up from 113 on Wednesday and the highest yet.

While hospitals are by no means full, only a certain portion of beds are set aside for COVID-19 patients, and these are becoming harder to find. As of Tuesday, there were 3,083 patients who had not secured a slot at hospitals or other facilities.

"Medical services are under pressure and are in a critical situation," the city's expert panel warned on Dec. 30.

Across Japan, occupancy of hospital beds for severely ill COVID-19 patients touched a high of over 30% at the end of December. The figure was as high as 65% in Osaka.

But beds are not the only issue.

"There is a lack of manpower" at hospitals, said Jiro Yasuda, professor of infectious diseases at Nagasaki University. "Even if we increase the number of beds, what can be done is limited due to shortages of staff."

Will this emergency declaration have the intended effect?

Some critics argue this is too little, too late.

Until late December, Suga's government was still encouraging consumers to travel domestically with its Go To campaign. The administration did suspend the program over the holidays. But Nagasaki University's Yasuda argued it "should have restricted the movement of people during the New Year's season."

"It is difficult to limit [the spread of the virus] once it is widespread among the public," he said. For the time being, compliance with the emergency and related business restrictions will be voluntary, based on Japanese law. Companies such as Hitachi, cosmetics maker Fancl and pharmaceutical company Daiichi Sankyo are arranging for more staff to work from home in the affected areas, while others are curtailing business trips.

Establishments that ignore the guidance cannot be fined -- they can only be named and shamed. However, Suga's government aims to change the law at the beginning of February, in order to more effectively punish such businesses. This proposal would have to pass the Diet.

In the previous state of emergency, some businesses failed to comply due to insufficient financial support.

The current subsidy program pays up to 600,000 yen ($5,800) per month. The payout was raised to 1.2 million yen for those that cut their hours during the year-end and New Year's period. It will be up to 1.8 million yen under the new state of emergency.

Maximum payouts for compliance offered by Tokyo and some other municipal governments, currently 40,000 yen a day, will be increased to 60,000 yen.

Why is it taking so long to start vaccinations?

Coronavirus vaccinations are underway in numerous countries, including the U.S. and U.K. Japan is starting to look like an outlier.

But despite the recent surge in infections, the Japanese case load is still nowhere near that of the U.S. or certain European countries. Thus, experts argue the country should not rush the vaccine approval process. Regulators also want to be on top of any side effects before they give the green light.

This is why Suga has suggested inoculations could start in late February.

"The work to review the trial data for the vaccines will be brought forward so the vaccinations will be started by late February," Suga said again on Thursday.

Yet, Japan has only a narrow window of time ahead of the planned Tokyo Olympics in July.

The available coronavirus vaccines require two shots, which need to be spaced out by a month. After the second shot, it takes a few weeks to gain immunity. So the jabs need to start soon if Suga is to convince the public it is safe to open the borders, especially given the threat of more transmissible coronavirus variants first identified in the U.K. and South Africa.

Further clouding the outlook, scientists in the U.K. have warned that vaccines may not work as well against the variant spotted in South Africa, though actual efficacy remains uncertain.