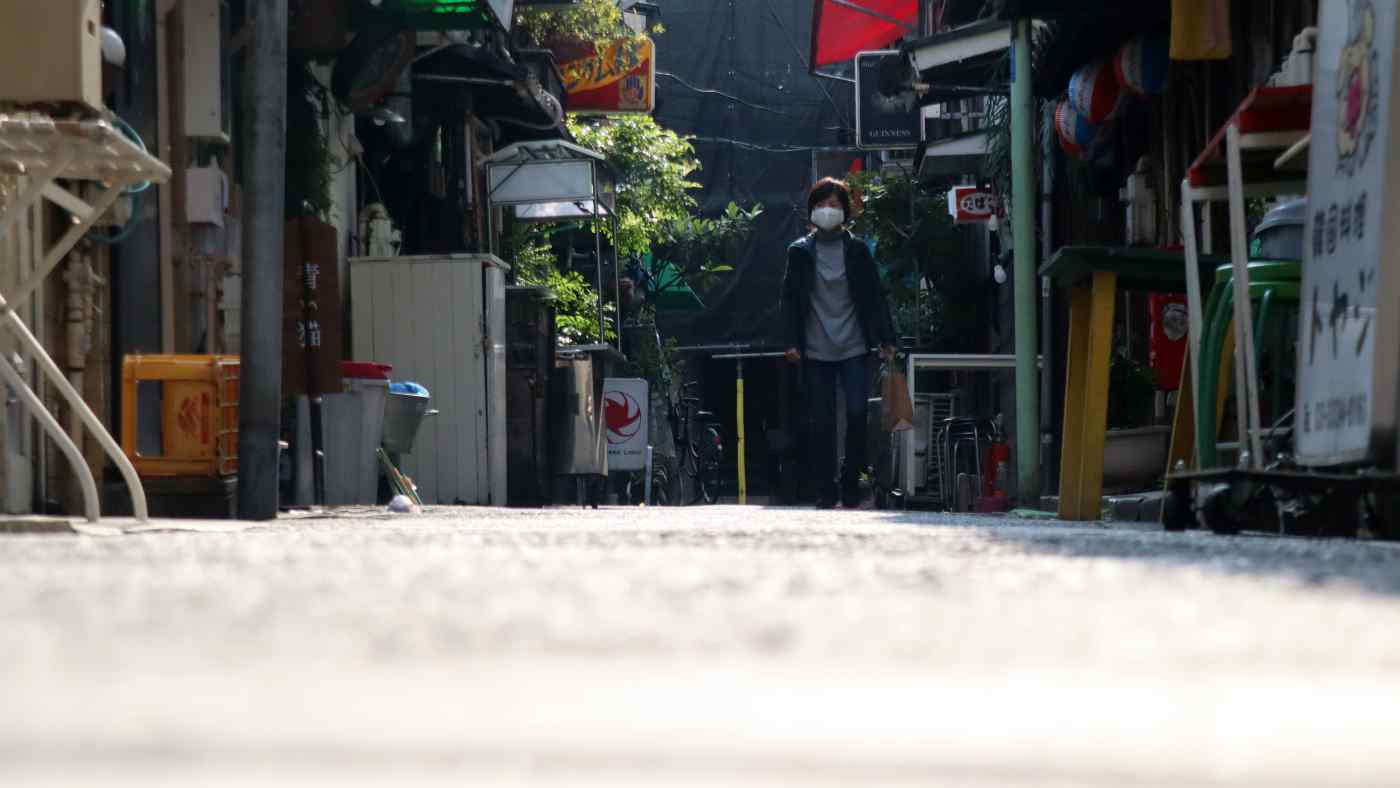 A street lined with restaurants in Tokyo is bereft of customers due to the coronavirus. (Photo by Ken Kobayashi)
JADA NAGUMO, Nikkei staff writerMay 2, 2020 13:03 JST | Japan
CopyCopied

TOKYO -- Small and mid-sized businesses in Japan are facing massive damage as the spread of the new coronavirus forces stores to close and slams the breaks on consumption.

Parliament on Thursday approved a supplementary budget including a new subsidy program for such enterprises struggling to sustain operations, with cash grants of up to 2 million yen ($18,664) for companies seeing declines of 50% or more in year-on-year monthly revenue. Sole proprietors, including freelancers, will also be eligible for a maximum of 1 million yen in subsidies. But large companies with over 1 billion yen of capital are excluded.

The Ministry of Economy, Trade and Industry began accepting applications on Friday, setting up a dedicated website and call centers, but things have not gotten off to a smooth start. The website was overwhelmed with traffic. The ministry will continue to screen applications during the Golden Week holiday, which runs through May 6, and hopes to begin disbursing grants on May 8.

Many companies appear set to apply for aid, given business owners' wariness about the future. Prime Minister Shinzo Abe said Friday that Japan's state of emergency will be extended for about a month beyond the initial May 6 deadline. That could put the survival of many businesses at risk.

Hajime Yoneda runs a three Michelin star restaurant in Osaka and has customers from around the world. But now the coronavirus has upended his French-style creative cuisine business.

"Around 170 people canceled their reservations in mid-March," Yoneda said, referring to a time when talk of city lockdowns around the world was spreading and travel restrictions were being put in place. The restaurant has been temporarily closed since Prime Minister Shinzo Abe announced the state of emergency last month.

Yoneda plans to apply for the cash grant, though stresses it won't be enough. "Rent and labor costs are large expenses for restaurants," he said, adding, "the cash grant will disappear quickly." Further, he says a "sense of crisis" is gripping the restaurant industry. "The government must come up with a scheme that offers support over the long term."

Along with the food and beverage sector, Airbnb-style minpaku -- private lodgings offered for rent in homes and apartments to cost-conscious travelers -- are also struggling amid the spread of COVID-19.

Tokyo-based startup Space Agent operates an online site that matches people who have extra property with those looking for places to rent out for Airbnb or as minpaku. CEO Ryota Kaminaka said that sales in April dropped over 50% from the previous year.

"We have about 30 employees and with the way business is going right now, honestly, it's not something that can be managed with a 2-million yen grant," he says.

The startup employs numerous engineers and designers, who tend to draw relatively high salaries. About half of them are currently on temporary leave. "The expansion of the employment adjustment subsidy will probably be of more help," Kaminaka notes.

Japan is working toward further beefing up its existing wage subsidy program, pledging that it will ensure workers at small businesses receive 100% of their wages during the state of emergency. But complicated procedures and slow processing of claims has drawn criticism.

Foreign residents who own small businesses in Tokyo are similarly seeking the government cash grant. "We are currently operating at approximately 10% of our normal revenue," said Sam Gilbert, co-founder of Club 360, a health and fitness center with two locations in Tokyo's Minato Ward.

Although the gym closed when the state of emergency was declared, Club 360's staff of 20 trainers, therapists and nutritionists began offering remote services to clients during the stay-at-home period.

"Obviously, extending the state of emergency will make things more difficult in the short term, but hopefully Japan can get on top of the virus and return to normal quickly," Gilbert said.

The subsidy "should help buffer the rent, salaries, and other expenses we still have to pay," he explains, though adding that he is not counting on it entirely.

Small factories are also in the same boat. Sugino Gomu Chemical Industry, established over 60 years ago, develops and manufactures industrial rubber. President Yukio Sugino is getting ready to apply for the cash grant, since his company qualifies due to its small scale with only three employees.

"March is usually our busiest season but many of our products are piled up in stock," Sugino explains. Along with the cash grant, the company has also applied for a special low-interest loan by government-backed financial institutions, as sales drop significantly.

Many business owners, including Sugino, predict that the coronavirus is far from over. "There is no prospect for when it will end. We are worried and short of funds," Sugino says.

Takahide Kiuchi, executive economist at the Nomura Research Institute and a former member of the Bank of Japan's policy board, says that the government cash grant will not be big enough, as "it is possible that consumer spending will decline 47 trillion yen in the six months through September."

Meanwhile, the supplementary budget for fiscal 2020 to fund the government's coronavirus emergency package only amounts to 25.7 trillion yen. Kiuchi says that it must continue to roll out much more detailed support measures.

"Cost structures differ among companies and rent is also very different in each area," he said. "It will be ideal if the government expands its fiscal support in the secondary supplementary budget and has municipalities or prefectures handle the money according to their situation," he said.