TOKYO -- It appears the percentage of small-to-medium-sized companies forced to suspend operations or discontinue their business in Japan amid the novel coronavirus pandemic has remained smaller compared to that in many other countries.

According to the Organization for Economic Cooperation and Development, the percentage in Japan reached 10% in May, well below the global figure of 26%. Japan's lower figure is attributed to the absence of the strict lockdown measures introduced in Europe. Still, the economic crisis may last for an extended period if infections once again spread widely.

Experts say a key factor to watch out for is how long the impact of public support measures that have been taken, including financial assistance, may last.

Royal Oak Resort, a hotel operator in the western Japanese city of Otsu, applied for voluntary bankruptcy proceedings in April.

"We were forced to suspend operations after the government declared the state of emergency and that made it impossible for us to paint a recovery path," said a former insider at the company. The OECD enlisted cooperation from Facebook to survey the situation facing companies with up to 500 employees in more than 500 countries.

June data for about 25,000 companies shows that 33% of events-related businesses were forced to suspend operations or permanently close.

The figure is 31% for travel-related industry and 19% for the hotel and restaurant industry. Business has slumped mainly for companies that offer services to customers face-to-face due to travel restrictions aimed at preventing the spread of the coronavirus.

According to Teikoku Databank, companies that went bankrupt due to COVID-19 totaled 458 in Japan. Over 80% of them were small or medium in size.

Still, such smaller scale businesses in Japan can be seen to be faring relatively well overall. The ratio of companies that suspended operations or closed down entirely was 10% in Japan from January through May, when the OECD tallied the country's figures, compared to over 20% for the United States.

The worldwide figure for the first five months through May was 26% and remained high at 18% in June, when the economy was gradually recovering.

But things were different in Japan. "Extensive support measures that aren't seen in other countries, such as non-interest, unsecured loans, had a lot to do" with Japanese companies being less hurt, Kumano said.

Yet, there is little room for optimism. According to Japan's Small and Medium Enterprise Agency, an average restaurant operator has just enough cash to pay for fixed costs, including rent and interest due, for 5.4 months, while the figure tor an average accommodation operator is 6.6 months. That means such businesses would face an existential crisis if they record no sales revenue for half a year. 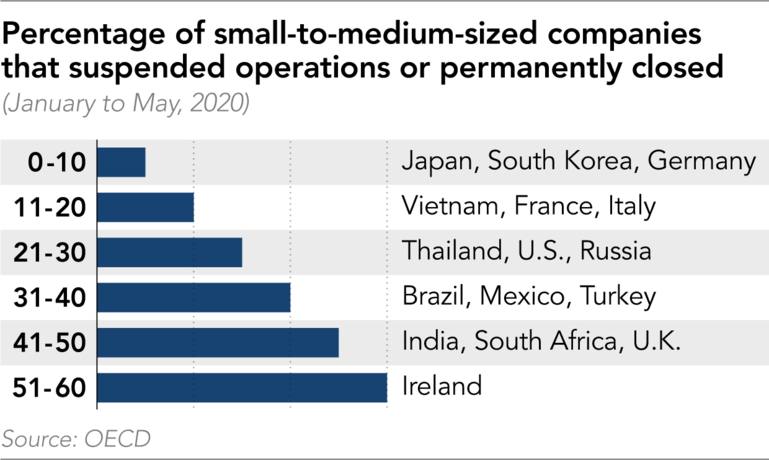 A survey conducted from late July to mid-August by Tokyo Shoko Research shows 9% of small- to medium-sized companies "may consider closing business" if the pandemic lasts for an extended period. Nearly half that percentage said they would close within one year if they decide to do so.

In the Bank of Japan's Tankan business confidence survey for June, the leading indicator of sentiment at small-to-medium-sized companies' in three months, was seen sinking to minus 38 from the minus 33 currently, indicating an increasingly pessimistic outlook compared to large businesses, which were indicated to expect improved conditions.

Another factor for Japan that should not be overlooked is that many companies with little growth potential have been kept afloat as a side effect of large-scale monetary easing that has remained in place since long before the coronavirus appeared. As these companies apparently depend heavily on government support measures, they may in reality have little strength to bring themselves out of their doldrums.

In the U.S. and Europe, where the ratio of companies that have suspended operations or closed down amid COVID-19 is high, the percentage of companies closing as well as that for ones newly established both exceed 10% annually, suggesting a trend for innovative new businesses to emerge and drive the economy.

If the ideal industry is one that revitalizes itself by refreshing its constituent companies and which results in labor shifting to growth areas, then such an industry appears difficult to find in Japan.

The number of coronavirus infections is once again increasing both in Japan and abroad. That means restrictions on economic activity are likely to remain for an extended period. In the U.S., increased unemployment benefits and measures to protect jobs had expired by early August. Talks between political parties have hit a snag in the Congress as because the country's policy resources are not unlimited.

The more extensive policy measures are, the more difficult it is to find an exit. A BOJ official said its crisis-addressing measures "must be ended sooner or later" and that finding the right timing to do so is "very difficult."