Japan's tourism windfall at risk as virus spreads in China SHANGHAI/ TOKYO -- The outbreak of the new coronavirus in China could hardly come at a worse time for Japan's tourism and retail industries.

With the Lunar New Year starting on Saturday, retailers had been counting on an influx of Chinese tourists to help offset tepid domestic consumption. Duty-free shops, drugstores and cosmetic shops have stocked up on popular goods and even brought in Chinese-speaking staff for the expected rush.

Expectations of a windfall, however, have been tempered by worries about the spread of the mysterious virus that has killed 26 people as of Thursday.

A total of 830 people in China have contracted the virus, with cases reported in Beijing, Shenzhen, Shanghai and Zhejiang. The central government has banned travel from Wuhan, ground zero of the disease and a key transport hub, as well as five other cities.

The virus -- which belongs to the same family as the disease that caused the deadly severe acute respiratory syndrome, or SARS, in 2003 -- has spread to Japan, South Korea, Thailand, Taiwan, Hong Kong, Macao and the U.S.

Airlines are starting to take precautions. Japan's All Nippon Airways announced Thursday that it would halt flights between Tokyo and Wuhan. Taiwan's China Airlines, Singapore's Scoot and Malaysia's AirAsia have also suspended flights to Wuhan. 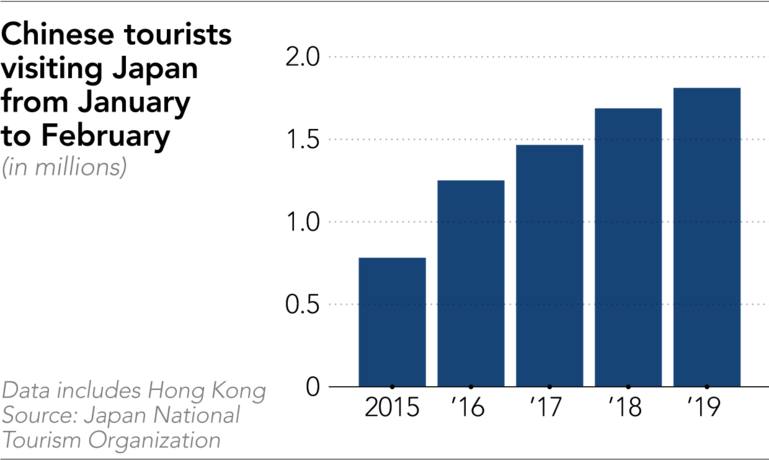 These moves could end up hurting tourism and retail in the region, which have already taken a hit from the slowdown in the Chinese economy over the last year. The impact could particularly painful for Japan, which is grappling with shrinking inbound tourism from South Korea and slowing domestic consumption after a sales tax hike in October.

Industry professionals say they can weather this crisis as the airlines have so far only suspended travel from Wuhan and not other cities, but others say it all depends on the spread of the virus.

The Lunar New Year is a major travel time for China. The country’s aviation authorities expect 79 million travelers to hit the road this year, 8% more than last year. While the vast majority will travel domestically, the top destination for those that venture abroad is Japan, followed by South Korea, Thailand, France, Singapore, Italy, according to Trip.com. Australia, Switzerland, the U.S. and U.K round out the top 10 destinations.

According to Hideki Matsumura, chief economist at the Japan Research Institute, Japan should still see a 10% increase in the number of Chinese tourists during the holidays from last year. "The new coronavirus will have a limited impact on tourism from China to Japan, as Japan does not limit entry to the country from China."

Gakuji Higashiuchi, who works at Niseko Promotion Board, a body that markets the popular ski resort of Niseko in Hokkaido, was equally optimistic. "Every year, more Chinese tourists visit Niseko during the Lunar New Year holiday," said Higashiuchi. "For now, we are not concerned over the impact of coronavirus."

There is a lot riding on that optimism.

Chinese holidaymakers are known for bakugai, or bulk-buying, in Japan. Ahead of the holidays, discount and duty-free retailer Laox has stocked up on cosmetics and other beauty products popular with Chinese visitors.

Last year, 66,000 people visited Laox's 38 stores across Japan during the 10 days of the holiday season. The retailer estimates that the figure will rise to 80,000 this year, if the coronavirus does not spread any further, a staff member said.

Japanese cosmetics maker Shiseido, a brand favored by Chinese, expects "many Chinese tourists" during the holiday, said a spokesperson. In its flagship store in Tokyo's Ginza district, Chinese-speaking staff and translators are on hand to help Chinese tourists.

Another product that Japanese retailers are expecting to sell well are surgical masks. Drugstore chain Tomod's is offering a 20% discount to WeChat Pay users until early February. In a store inside Japan's Narita International Airport, store managers have stocked up on surgical masks.

"We've heard that masks are sold out in China due to a new coronavirus, so we are strengthening the product lineup," said a spokesperson.

As well as stocking up on popular items, retailers are turning to mobile apps to attract shoppers. Trip.com has formed a partnership with UnionPay to tie up with over 900 merchants in Japan to make purchases easier for Chinese tourists.

But as fears over the virus grow, not everyone in Japan is welcoming Chinese visitors with open arms. A candy shop in Hakone, a well-known hot spring resort area, put up a handwritten sign in Chinese reading, "No Chinese -- we do not want the virus."

The sign has stirred controversy in Japan, with the shop owner telling reporters he has no intention of removing it.

One reason the issue has resonated so loudly is the importance of Chinese spending for Japan. Hideyuki Araki, chief economist at Risona Research Institute, said, "Chinese tourist consumption trends will be the touchstone for Japan's entire economy in 2020."

Araki sounded a note of caution about the new virus: "If the virus spreads also in Japan, overseas tourists will refrain from visiting Japan later this year. That will cause a significant impact on the Japanese economy."

From the Chinese side, meanwhile, Japan remains an attractive destination.

"Chinese appreciate Japanese etiquette," said a Chinese online travel news editor. "The Japanese treat customers like god, and this is the biggest different between Japan and China."

At the same time, Chinese consumer spending is starting shift toward experiences  rather than goods, reflecting the growth of middle and upper-income groups. "We will continue to see growth in international travel closer to China," said Ben Cavender, managing director of China Market Research Group in Shanghai, citing Japan's Niseko, known for skiing as an example.