TOKYO -- Japan's hospitals are facing a capacity crunch with no end in sight, amid indications that Prime Minister Yoshihide Suga's coronavirus emergency measures may not go far enough to flatten the infection curve.

On Wednesday evening, Suga announced that another seven prefectures would come under a state of emergency through Feb. 7. The same measures imposed on Tokyo and three surrounding prefectures on Jan. 8 -- such as shortening restaurant hours and asking residents to stay home -- are being extended to other major cities including Osaka and Nagoya.

The government also announced a freeze on all 11 of its business travel bubble agreements.

Yet as things stand, artificial intelligence forecasting by Google suggests Japan's daily coronavirus deaths will jump 3.5-fold over the next 28 days to more than 200, on a seven-day moving average basis. Daily infections are forecast to climb to around 9,500 from about 5,700.

Japan's predicament underscores the difficulty of containing this virus and saving hospitals from its ravaging effects, even with some economic sacrifices.

After suspending its Go To Travel campaign to rescue the tourism industry on Dec. 14, the Suga government made a Christmas Day appeal to the public to spend the New Year's holidays at home. On Dec. 28, Japan closed its borders in response to new COVID variants found in the U.K. and South Africa, barring the business travel arrangements. Then came the emergency declaration for the capital area earlier this month.

Ko Ichihashi, professor at Jichi Medical University's Saitama Medical Center, said these steps may have worked -- to a point.

"A further increase in COVID cases may have been stopped," Ichihashi said. "But I'm not sure if this will lead to a clear downtrend." 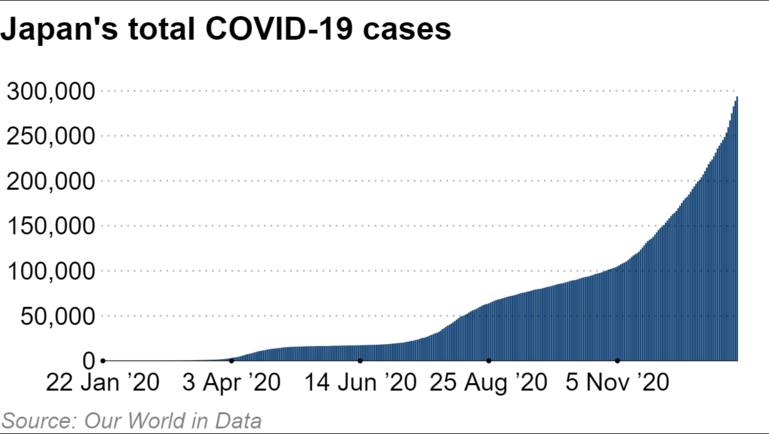 So far, Japan's daily infections peaked at 7,855 on Saturday, according to World Health Organization data. The numbers have since declined -- 5,460 cases were reported on Tuesday -- but the country is hardly out of the woods. Hospitals are struggling to accept inpatients unless they are seriously ill. Even then, it takes time to find an available bed.

Unlike simple testing, treating COVID-19 requires proper equipment, safety protocols and well-trained staff. Hospitals that meet the criteria are rapidly filling up. The occupancy rates of hospital beds that can accommodate severe coronavirus cases were as high as 87% in Tokyo and 65% in Osaka as of Jan. 6.

In the capital, over 6,000 people who tested positive have nowhere to go for treatment.

Doctors and nurses are dealing with long hours and complain of discrimination, as some see them as vectors of the disease. A survey by the Japan Municipal Hospital Association, released on Dec. 24, showed that 126 health care workers had already quit their jobs by Oct. 31, citing the strain of the pandemic.

The survey also found that hospitals lost money every month from June to October, except September, as patients with other ailments stayed away for fear of catching the virus.

The Japan Stroke Society said last week that 18% of hospitals were having difficulty responding to emergency cases as of Dec. 14, due to capacity constraints. Ichihashi warned of a rising danger of deaths by other causes.

"It takes a month to nurse a severely ill COVID patient back to health. The bed remains occupied, meaning new patients cannot be admitted," he said. "The health care situation will continue to get worse even if COVID cases do not increase further." A staff member at a Tokyo restaurant closes up shop after the clock strikes 8 p.m. on Jan. 8.   © Reuters

The government wants restaurants in the emergency areas to close at 8 p.m., and residents to stay home in the evenings. But neither measure is legally binding. And unlike last year's state of emergency in April and May, most other economic activity continues normally -- from daytime dining to movies and amusement parks.

A survey by Japanese mobile carrier NTT Docomo showed pedestrian traffic was down 30% to 50% in downtown areas of major Japanese cities on Tuesday, compared with the average from Jan. 18 to Feb. 14 of last year.

The Suga government is attempting a difficult balancing act of stopping the virus while minimizing economic damage. But officials appear to acknowledge the need for greater self-restraint on the part of the public -- at all hours.

On Tuesday, Yasutoshi Nishimura, the minister responsible for Japan's coronavirus response, urged people to avoid meetings over lunch. Health Minister Norihisa Tamura issued a reminder that attending a drinking party during the day or in a home is just as risky as going to a bar at night.