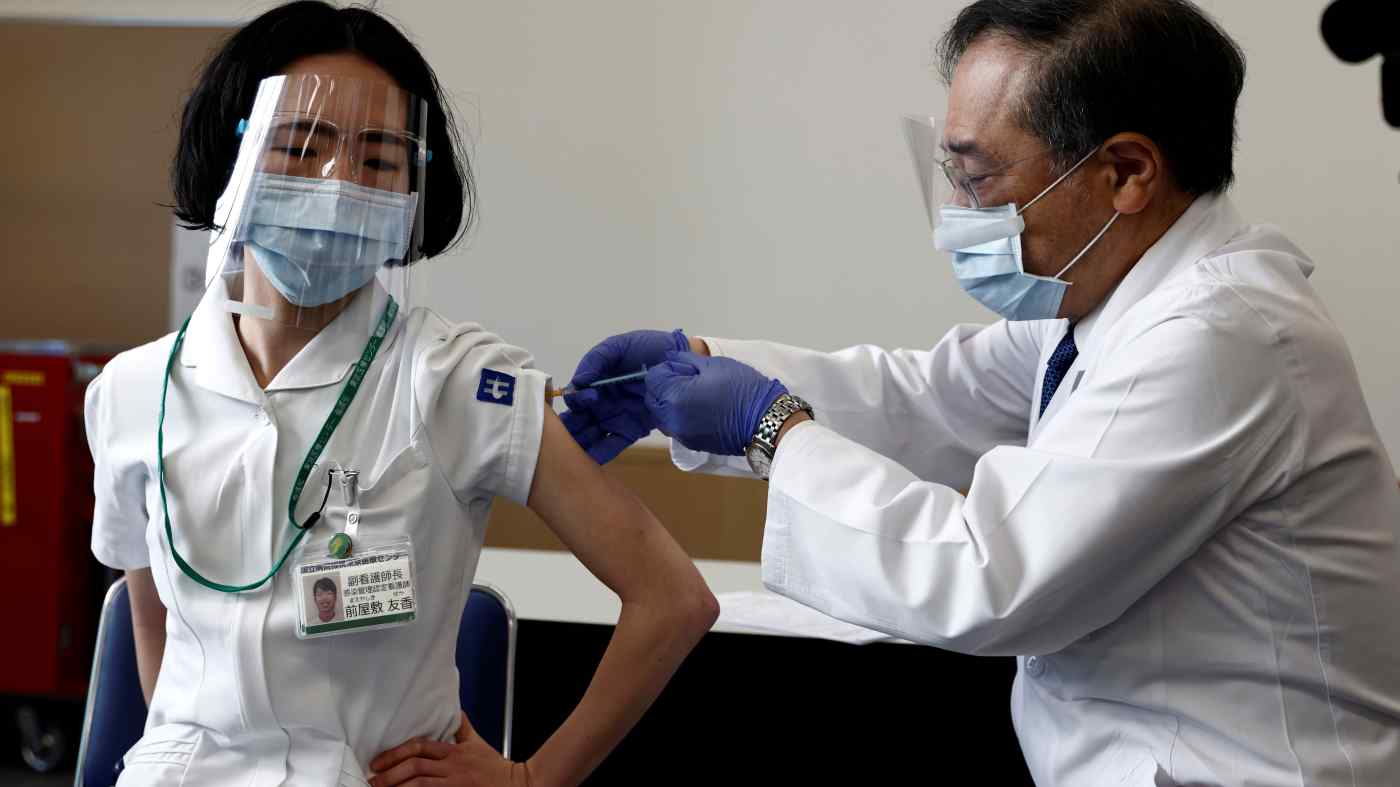 TOKYO (Kyodo) -- Japan began administering COVID-19 vaccinations on Wednesday, starting with health workers in Tokyo before expanding the rollout nationwide as the clock ticks down to the Summer Olympics.

The country has been slow to launch inoculations against the coronavirus, starting its program later than at least 70 other countries as Prime Minister Yoshihide Suga's public support dwindles amid criticism of a sluggish pandemic response.

Speaking in a parliamentary committee meeting, Suga reiterated that vaccines will be the "decisive factor" in fighting the coronavirus and vowed to move forward with the rollout while keeping the public informed.

Vaccinations are due to take place at 100 medical facilities across the country by next week, with specialized freezers already in place to store the vaccine developed by U.S. drugmaker Pfizer Inc. and Germany's BioNTech SE at subzero temperatures.

Of the initial group of 40,000 health workers, 20,000 will participate in a study to track side effects potentially caused by the vaccine and the frequency with which they occur.

They will be asked to keep daily records for seven weeks after taking the first of two shots. The shots will be administered three weeks apart.

Twelve staff, including three doctors and five nurses at the state-run Tokyo Medical Center, were inoculated on Wednesday with none immediately feeling any side effects.

Hospital head Kazuhiro Araki, who was first in the country to receive the shot, said he hopes participating in the study will "help both staff and patients prevent infections."

A further 3.7 million front-line health workers are to begin being inoculated in March, followed by 36 million people aged 65 or older from April.

People with preexisting conditions such as diabetes or heart disease and those working at elderly care facilities will come next, and then finally the general population.

The minister in charge of vaccination efforts, Taro Kono, said Tuesday that foreign residents will become eligible for the free shots in the same order of priority as Japanese citizens, as long as they are registered with a municipality.

Japan received the first shipment of about 386,000 doses from Pfizer's factory in Belgium last week and granted fast-track approval for domestic use on Sunday.

Kono told a press conference that the second shipment had been cleared by the European Union under its new vaccine export controls and was expected to arrive next week, but declined to say how many doses it would contain.