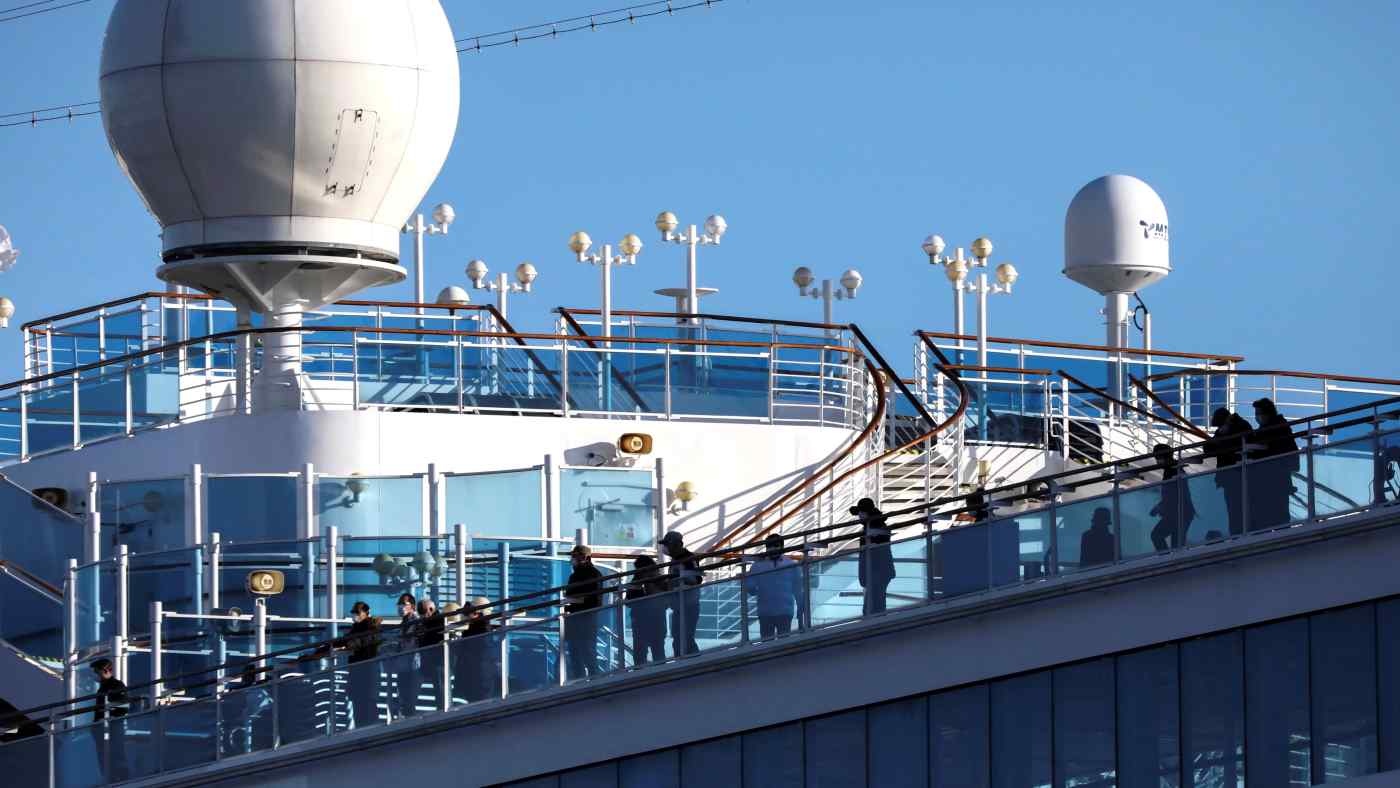 Passengers aboard the Diamond Princess on Feb. 18 wait to be allowed off the cruise ship at the Daikoku Pier Cruise Terminal in Yokohama, south of Tokyo.   © Reuters
February 18, 2020 19:54 JST | Japan
CopyCopied

TOKYO (Kyodo) -- About 3,000 people on a cruise ship quarantined in the Japanese port of Yokohama due to the outbreak of a new coronavirus will start disembarking Wednesday as scheduled, health minister Katsunobu Kato said.

Kato told a press conference on Tuesday that test samples had been collected from all the remaining passengers of the Diamond Princess, and that disembarkation is expected to be completed by Friday.

Those who tested negative will be allowed to leave without restriction, while those who have been infected with the virus will be hospitalized. The same measures will apply to the crew.

The cruise ship was carrying around 3,700 passengers and crew from more than 50 countries and regions. The number of infections among them rose by 88 on Tuesday, bringing the total to 542.

Chief Cabinet Secretary Yoshihide Suga, meanwhile, said at a press conference that it has been "appropriate" to keep the passengers and crew on board until the two-week quarantine period ends Wednesday.

His comments came amid questions raised by U.S. media about Japan's response to the situation onboard the Diamond Princess after a group of 328 American passengers from the ship left for home early Monday on planes chartered by the U.S. government.

Aside from those on the vessel, the number of infections confirmed in Japan rose to 56, with three new cases reported Tuesday, including a son of an infected doctor at Saiseikai Arida Hospital in Wakayama Prefecture.

The son became the first infected person in Japan under the age of 20, the prefectural government said, but added, so far he does not have symptoms.

The other two are a male inpatient at the hospital, who shared a room with another infected patient, and a male nurse in his 30s who was part of a medical team dispatched to the cruise ship, according to the local government.

In the western Japan prefecture, nine other people have already been confirmed to be infected with the virus. They include a man in his 50s who has not recently visited the hospital.

"We are seeing an increase of cases in which the route of transmission is not immediately known," Kato said, adding, "We must take measures by considering the possibility of it spreading to a certain degree."

Meanwhile, four Japanese nationals who were aboard the Westerdam, a cruise ship which was earlier refused entry to Japan due to suspected cases of infection, arrived at Tokyo's Haneda airport early Tuesday, Foreign Minister Toshimitsu Motegi said.

They have cleared an initial screening in Cambodia where they disembarked, and are undergoing another test following their arrival in Japan, he said.

Another Japanese national who works as a crew member on the Westerdam wishes to remain with the vessel, Motegi said, adding the ministry will stay in touch and provide the necessary help.

On Tuesday, WHO Director General Tedros Adhanom Ghebreyesus told a media briefing that the virus is fatal in about 2 percent of reported cases and appears to be "not as deadly as other coronaviruses including SARS and MERS."

The fatality rate of MERS was over 30 percent, while that of SARS was about 10 percent, according to the WHO.

Based on data provided by China on more than 44,000 confirmed cases of the virus, more than 80 percent of patients develop only mild symptoms before recovering.

In about 14 percent of cases, the virus causes severe symptoms, including pneumonia and shortness of breath, and in about 5 percent, patients will have critical symptoms including respiratory failure, septic shock and multi-organ failure, he said.

The WHO director general also said the risk of death increases with age and that there are relatively few cases among children.

While the data appears to show a decline in new cases, he called for continued vigilance, saying, "It's too early to tell if this reported decline will continue."

The WHO's situation report dated Monday showed 71,429 people have been confirmed to be infected with the virus worldwide, with those in mainland China making up 70,635 of the total cases.