Passengers with chronic conditions to finish quarantine period on land 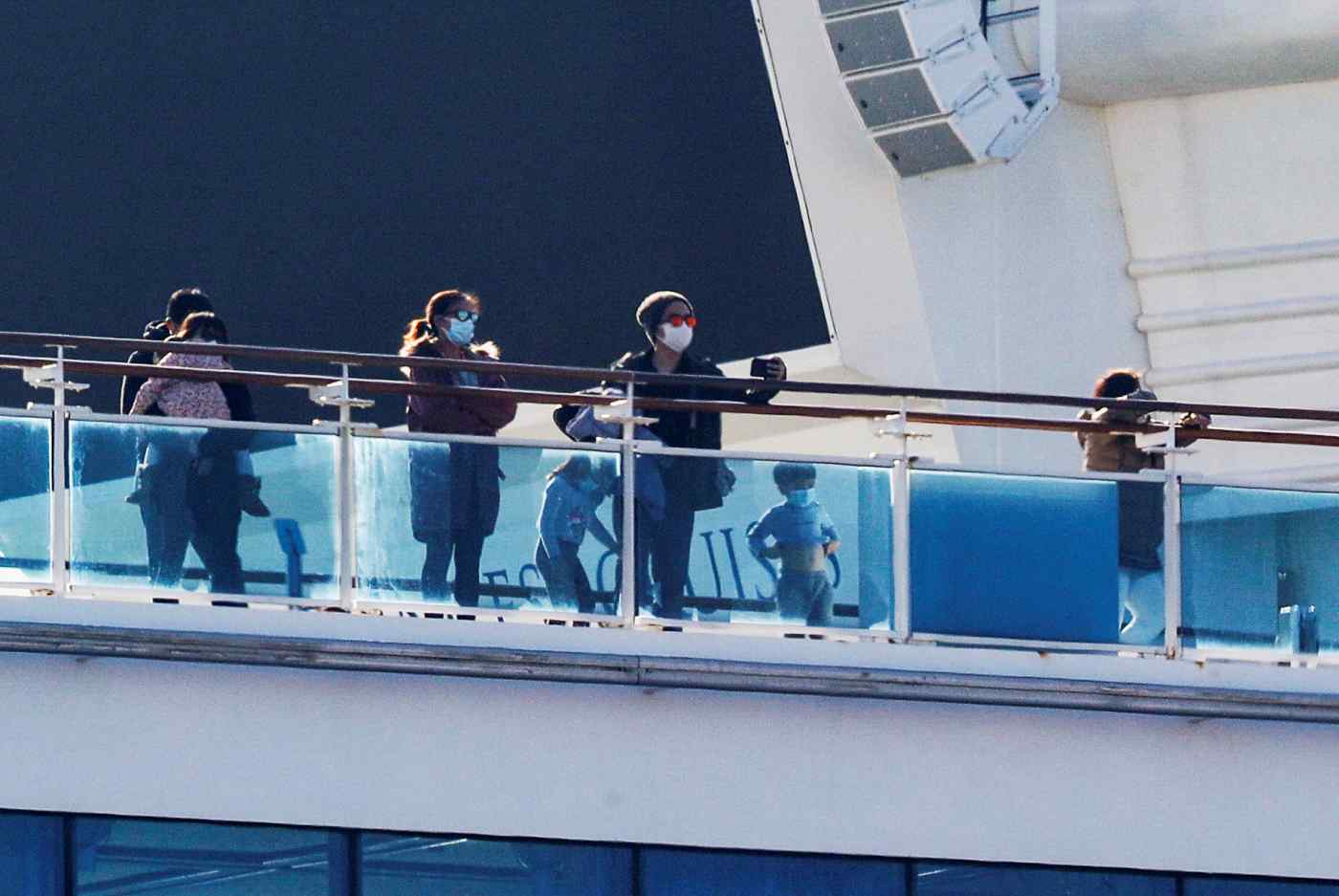 Passengers stand on the deck of the Diamond Princess cruise ship at Yokohama on Feb. 13, as officials continue to run tests for the coronavirus.   © Reuters
February 13, 2020 15:37 JST | Japan
CopyCopied

TOKYO (Kyodo) -- The Japanese government said Thursday it will let elderly passengers suffering chronic illnesses disembark earlier than scheduled from a coronavirus-hit cruise ship quarantined at Yokohama if they test negative for the virus.

It also said 44 more people on the ship have been confirmed as infected with the pneumonia-causing virus originating in the Chinese city of Wuhan. Of the 247 infections in Japan, 218 are passengers and crew from the ship.

The roughly 200 passengers aged 80 and over on the Diamond Princess may be allowed off the ship as early as Friday, depending on their wishes and health condition, health minister Katsunobu Kato told reporters, adding those with pre-existing conditions have already undergone screening.

Those who are allowed off the ship will stay at facilities prepared by the government until the isolation period ends next Wednesday. The more than 3,500 passengers and crew were originally scheduled to be confined aboard the ship through that day.

"There are some people whose health may deteriorate by staying (aboard) for an extended period," said Kato, while indicating the ministry may lower the age for people allowed to disembark.

After a male passenger in his 80s was found to be infected with the virus after leaving the vessel in Hong Kong, the ministry has checked the health of all those still on the ship, testing those with symptoms and others who came in close contact with them. The ship arrived in Yokohama on Feb. 3.

The ministry has since requested people to stay in their cabins to prevent the spread of the virus after taking those infected as well as those who fell ill to hospital.

But as the days mount up without sufficient cleaning services and medical support, there have been growing calls from the remaining passengers for more doctors to come on board.

Meanwhile, the first group of Japanese nationals evacuated from Wuhan on a government-chartered aircraft amid the coronavirus outbreak was allowed to go home Thursday after a little over two weeks of isolation.

A total of 197 people had been quarantined at a hotel in Chiba Prefecture, near Tokyo, and government facilities since they returned on Jan. 29 from the Chinese city at the center of the outbreak.

They all tested negative in their final virus examination conducted Tuesday after completing a 12.5-day monitoring period for the deadly pneumonia-causing virus.

The health ministry said returnees on the second chartered aircraft that arrived on Jan. 30 will also be free to return home if their latest test results that come out later in the day show they are not infected.

"I appreciated the kind treatment we were shown by government officials and people at the hotel. I was able to spend my days without much stress," said a man in his 30s from Mie Prefecture who was among the returnees. "I want to thank the local people who have encouraged us too."

The Tokyo government said it will provide 50 temporary public housing units free of charge for those who do not immediately have a place to live available.

The coronavirus outbreak has already claimed more than 1,300 lives in China, with the number of people infected with the virus on the country's mainland close to 60,000, according to its health authorities.