Japan to extend COVID restrictions for 30m people until after Olympics

Organizers under pressure to cut spectators if restrictions remain in Tokyo Tokyo, which is hosting the Olympics in under three weeks, could face an extension of COVID measures, as cases remain high. (Photo by Shihoko Nakaoka)
Nikkei staff writersJuly 6, 2021 02:01 JST | Japan
CopyCopied

TOKYO -- Japan is set to extend its coronavirus quasi-state of emergency in Tokyo and three nearby prefectures a little more than two weeks ahead of the opening of the Olympic Games, Nikkei has learned.

A recent jump in coronavirus infections has prompted the government to postpone ending the voluntary restrictions on business and other activities the capital and neighboring Kanagawa, Saitama and Chiba, together home to more than 30 million people. The measures were were originally set to end on July 11.

Officials have proposed extending the measures for about another month, until after the Tokyo Olympics. This year's games are scheduled to open on July 23 and last until Aug. 8. The government will make an announcement on its decision as early as Thursday.

Ten prefectures, including Tokyo, are currently under the quasi emergency while Okinawa is under a COVID-19 state of emergency with tougher restrictions until July 11. 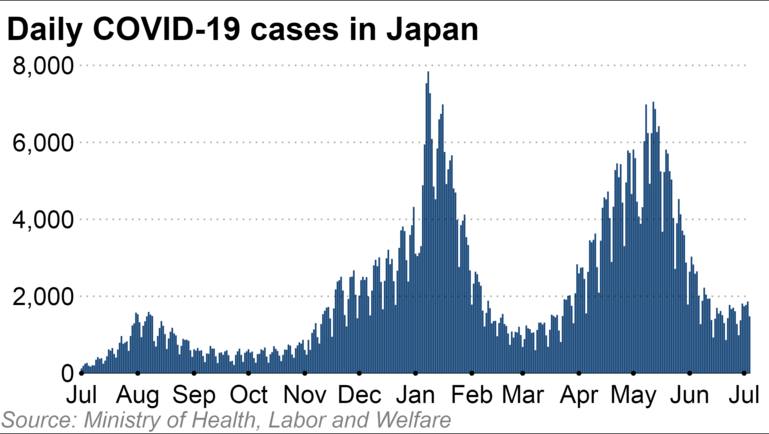 "We need to reach a conclusion as soon as possible," Prime Minister Yoshihide Suga said on Monday.

Olympic organizers had initially said that they would allow 10,000 domestic spectators, or up to 50% of capacity, at each venue. However, that decision was based on the lifting of the quasi-emergency on July 11.

If Suga does extend the quasi-state of emergency on Thursday, the Tokyo 2020 committee plans to hold a five-party meeting including the International Olympic Committee and other organizers on the same day to discuss the number of spectators.

There is speculation that organizers will halve the number of spectators or even disallow any altogether if the quasi-emergency was to be extended, as was raised at the previous meeting in June.

The government will also consider tightening restrictions on serving alcohol, or even ban it, in areas under the quasi-emergency. Currently, restaurants are able to serve alcohol until 7 p.m. as long as certain measures are in place.

Unlike the tougher COVID state of emergency, the government under the quasi-state does not have legal power to demand the closure of businesses.

On Monday, the number of newly infected people in Tokyo totaled 342. The figure has been increasing steadily over the past few days. The hospital occupancy rate in Tokyo and its three neighboring prefectures remains high at around 20% to 30%.