One month of additional restrictions proposed to stop coronavirus spread TOKYO -- Japan's government plans to extend a nationwide state of emergency beyond May 6, Nikkei learned Wednesday, as the country's coronavirus outbreak has yet to subside.

The public could be urged to stay at home for about one month longer under a proposal to be discussed at an expert meeting on Friday.

"It is still very uncertain whether we will be able to say, 'It's over,' on May 6," Abe told lawmakers in the upper house on Wednesday.

The Friday meeting will consider how the virus is spreading, whether the public has reduced contact and otherwise changed its behavior, and the state of the health care system.

Possibilities include extending the state of emergency until the end of May or until June 7. Public transportation and stores selling daily necessities, like supermarkets, can continue to operate. Residents still can go to the hospital, shop for necessities, and take walks outside. 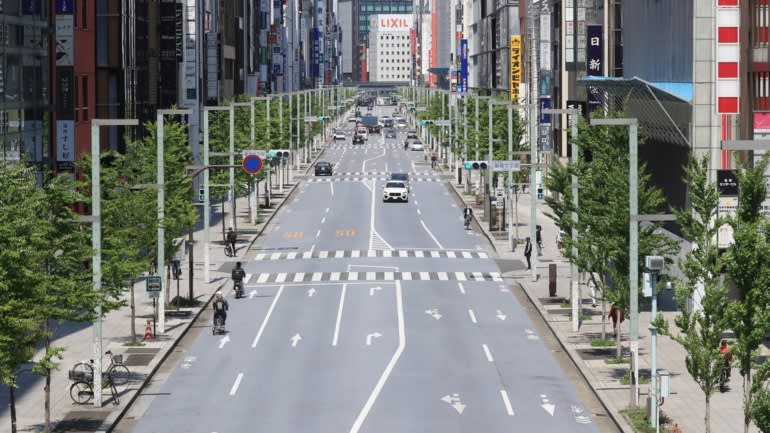 Traffic is sparse on a usually busy avenue in Tokyo's Ginza district on April 29. (Photo by Kosaku Mimura)

The coronavirus continues to spread rapidly in some parts of Japan. The Tokyo metropolitan government on Wednesday said it confirmed 47 new cases that day, up from 112 on Tuesday. Of those 112 infected people, 42 could not be traced to other confirmed patients.

"We will have a hard time lifting the state of emergency unless we can bring new infections down to 20 or 30 people," a government official said.

The country has yet to achieve the government's goal of reducing human-to-human contact by 80%, which was considered crucial to lifting the state of emergency by the end of its first month. Foot traffic around Tokyo's Shinjuku district was down 70.8% on Tuesday, according to mobile carrier NTT Docomo.

Compliance was even lower outside the capital, with traffic in Fukuoka's Tenjin area down 58.9%. Many governors support a nationwide extension.

"Unless the outbreak stops spreading in big cities, the entire country is at risk," said Akita Gov. Norihisa Satake at a Wednesday at a meeting of the National Governors' Association.

Shizuoka Gov. Heita Kawakatsu said the extension should not be region-specific but nationwide "to keep people from moving across prefectural borders."  Shizuoka is "on the verge of pervasive infections," Kawakatsu said.

But leaders of less affected prefectures were hesitant, given the potential economic cost. "Each region could have its own approach, rather than everybody doing what the big cities are doing," said Saga Gov. Yoshinori Yamaguchi.

Abe said Wednesday that announcing an extension too close to the May 6 end date "will lead to confusion." The prime minister aims to give the public some time to prepare by making an announcement after the meeting on Friday and finalizing details as early as Monday.

Any extension is likely to apply nationwide, given concerns that focusing only on the 13 regions deemed hot spots -- which include Tokyo, Osaka, and Fukuoka -- could trigger an exodus of their residents and further spread the virus. The government could decide on another extension if the situation remains unsettled.

The government will maintain the option of designating hot spots during the extension, although it may change the regions on that list. This will allow measures to be tailored depending on whether a region is experiencing a widening outbreak or is stable, like Iwate, the only prefecture in Japan to have no COVID-19 cases.

Japan first declared a state of emergency at seven prefectures, including Tokyo and Osaka, on April 7. This was expanded to the rest of the country on April 16, ahead of the annual Golden Week holidays, which began Wednesday and last until the second week of May.

The state of emergency gives prefectural governors the legal authority to urge residents to stay home. Governors of hot spots can issue stronger requests to businesses to close their doors. They can also publish the names of businesses that do not comply with these requests.