Japan to lift coronavirus alert in Tokyo and all areas 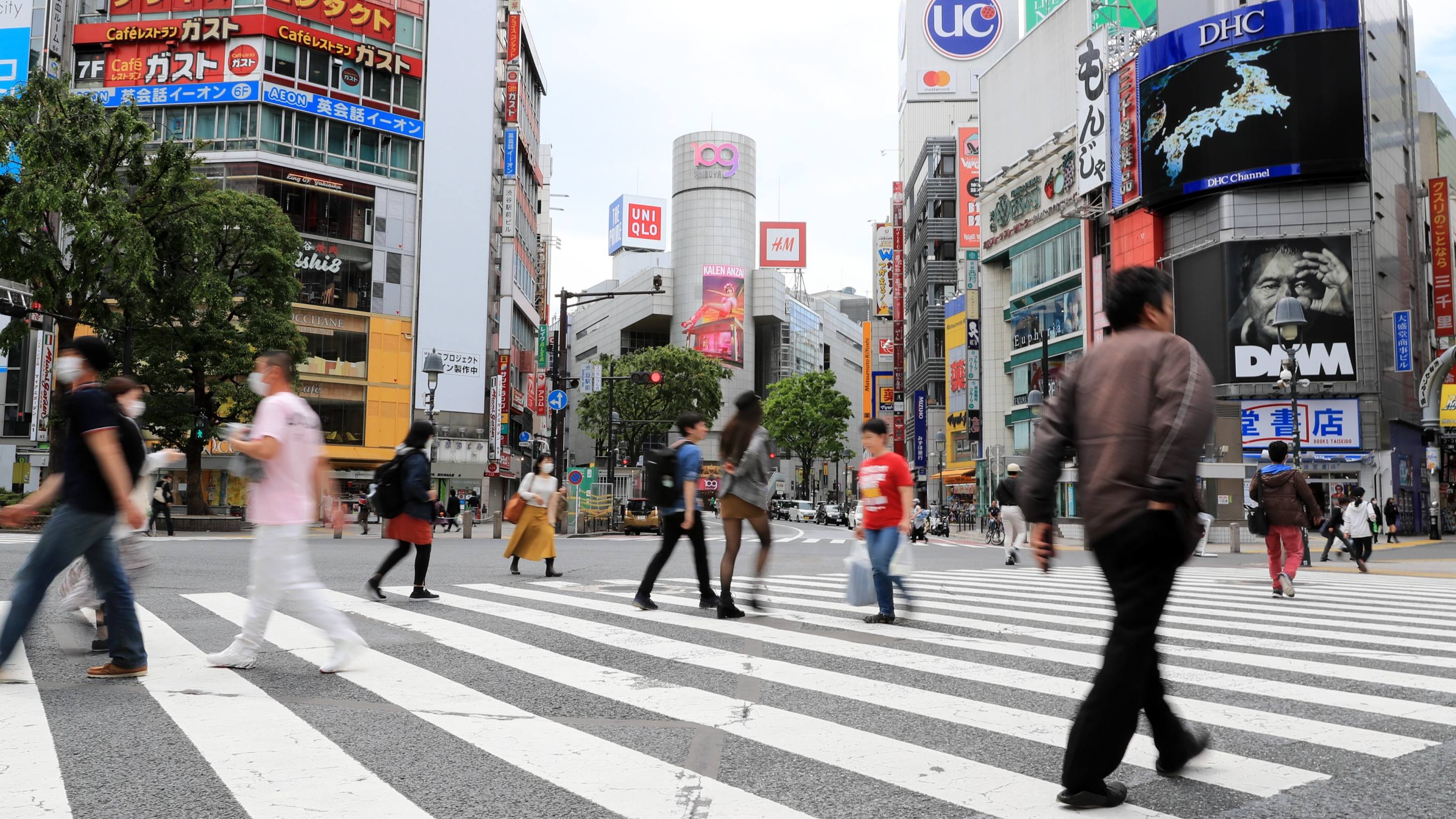 The famous scramble crossing in front of Tokyo's Shibuya Station on May 10: The city's state of emergency is likely to be lifted soon. (Photo by Kosaku Mimura)
MITSURU OBE, Nikkei staff writerMay 24, 2020 17:49 JSTUpdated on May 25, 2020 12:18 JST | Japan
CopyCopied

TOKYO -- Japan is set to lift the coronavirus state of emergency in Tokyo and four other prefectures still on alert, ending seven weeks of economic restrictions and ushering in an uncertain "new normal" on Monday.

Yasutoshi Nishimura, Abe's minister in charge of the coronavirus response, on Monday asked the expert panel on COVID-19 if the lifting of the emergency is feasible. The panel said yes. The government's task force will finalize the decision later in the day.

"The experts recognized that it is no longer necessary to implement emergency measures in all prefectures, and the declaration of the cancellation of the state of emergency has been approved," Nishimura told reporters Monday morning.

Although the country of 126 million has recorded over 16,000 infections and 800 deaths since the pandemic began, it has avoided a devastating outbreak like those seen in the U.S. and elsewhere. Prime Minister Shinzo Abe's government called off the emergency in most regions earlier this month, and it is poised to do so for Tokyo and nearby Kanagawa and Saitama prefectures, as well as Hokkaido, after consulting with experts.

The capital has limited new cases to single digits on most of the past 10 days. Officials reported an uptick on Sunday -- 14 new cases -- casting some doubt on whether Abe would indeed lift the alert on Monday. Referring to the double-digit rise in daily cases in Tokyo on Sunday, the experts suggested it would "continue rigorous reviewing of the situations in Hokkaido, Kanagawa and Tokyo," Nishimura told reporters on Monday. The number of discharged patients has been steadily increasing, easing pressure on hospitals.

Nishimura acknowledged to reporters on Sunday that cases had risen in Tokyo as well as Hokkaido, which saw 15. But he said the government has been watching the weekly numbers and stressed that "the declining trend has not largely changed." In recent days, Tokyo has been averaging about four cases, below the government's goal of 10. The overall decline in infections has been achieved despite the lack of a strict lockdown. Compliance with Japan's emergency, initially declared on April 7, has been voluntary and nonbinding. But schools, department stores, shopping malls and movie theaters agreed to close, while many citizens have been working from home during the week and staying in on weekends. By and large, restaurants and bars either shut their doors or switched to takeout only, for shorter hours. Tokyo's metropolitan government offered cash incentives for businesses that cooperated.

Now the city looks ready to rumble back to life. On Friday, Tokyo Gov. Yuriko Koike presented a road map that calls for reopening in three stages.

Schools, gyms and museums are to reopen in the first phase. Restaurants will be asked to close at 10 p.m., rather than 8 p.m. Baseball games are to resume without spectators, while bowling alleys will also open. Gatherings will have a green light but should be limited to 50 people. The Yomiuri Giants and Tokyo Yakult Swallows play a preseason game in an empty Tokyo Dome. Pro baseball is expected to resume without spectators.   © Reuters

In the second phase, retail stores handling nonessential items will reopen, along with cram schools and theaters. Gatherings will be expanded to up to 100 people.

The third stage will involve reopening confined locations such as internet cafes, game arcades and pachinko parlors. The recommended maximum event attendance will rise to 1,000 people.

The city plans to wait up to two weeks before advancing from one stage to the next, and it will continue to monitor infections. There is no reopening schedule for music venues, karaoke bars and fitness clubs, many of which generated coronavirus clusters.

The Nippon Professional Baseball Organization said on Friday that it will announce a new game schedule once the emergency is lifted nationwide. The Japan Professional Football League said it will hold a meeting this coming Friday to discuss soccer match scheduling. Medical advisers to the two pro sports bodies recommended that games be held behind closed doors, and that players be tested before the seasons resume.

Sogo and Seibu department stores partially reopened in Tokyo on Saturday. Clerks wearing masks and face shields were checking customers' temperatures at the entrances and asking them to sanitize their hands.

In the western city of Osaka, where Abe lifted the state of emergency on Thursday, a long line of shoppers formed outside the flagship Hankyu department store before it opened on the weekend.

Kentucky Fried Chicken said on Friday that it would resume eat-in service in prefectures freed from the emergency. Starbucks is also allowing customers to sit in some of its cafes again, though it is only offering takeout in major metropolitan areas.

The prospects for a sales recovery remain hazy. After weeks of being cooped up, many consumers are likely itching to get out as the weather warms up. On the other hand, persistent concerns about catching the coronavirus may dissuade some from venturing into stores and restaurants.

A survey of 10,000 restaurants by reservation app operator Toreta found only a slight increase in patronage in areas where the state of emergency has been lifted.

Royal Host, a chain of family restaurants, is using half its seating capacity at all locations to keep diners at a safe distance. This has resulted in long waits and lower sales.

"Preventing infection is the top priority," a Royal Host official said. "The sales decline will continue for a while."

Meanwhile, health officials are bracing for any potential flare-up in cases. 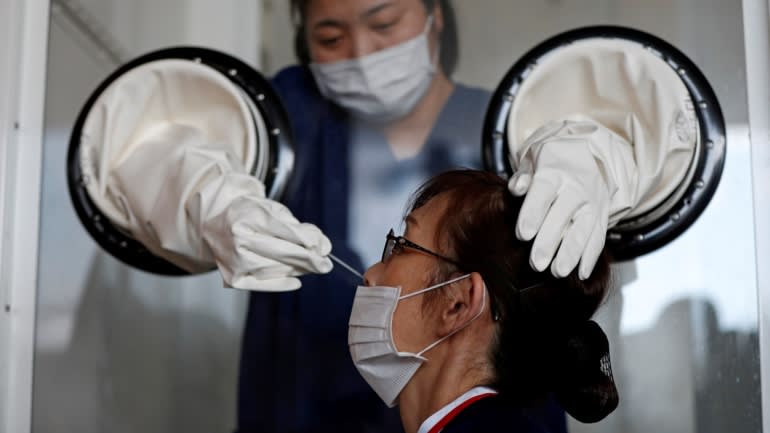 Japan has worked to increase its PCR testing capacity, setting up facilities like this one in Yokosuka, south of Tokyo.   © Reuters

The scale of polymerase chain reaction, or PCR, testing is still relatively limited. But tests are more widely available than before, as private hospitals have joined public health centers and hospitals in the testing campaign. There are also new testing sites run by hospitals and municipal authorities across Tokyo. Daily testing capacity in the city is set to hit 10,000 -- triple the figure earlier in the crisis.

In the early days of the pandemic, which intensified in late March, some individuals were forced to wait up to a week just to take a test, as public health centers were overwhelmed with requests. In theory, the expanded testing program should help to catch new cases faster, bolstering Japan's defense against a dreaded second wave.